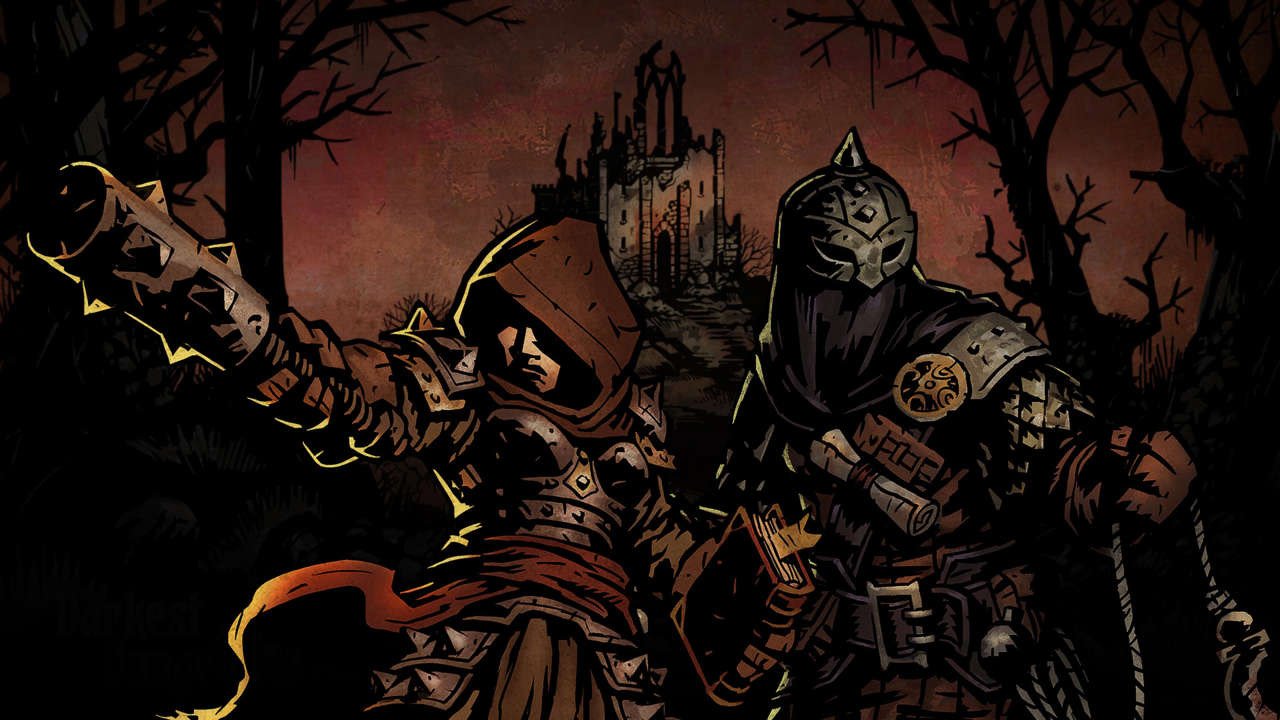 Darkest Dungeon makes a strong first impression. From the moment it begins, the player is presented with a world rendered murky and foreboding through a distinct comic book visual style. Heavy shading exaggerates the inky blackness of shadows and bright red is splashed liberally, highlighting spilled blood and, when aboveground, doomsday skies. The game is meant to evoke a feeling of hopelessness—of insurmountable evil. The unforgiving nature of playing through Red Hook Studios’ role-playing/strategy hybrid makes good on this atmosphere, delivering brutal difficulty and hard-won rewards in nearly equal measure.

The overarching goal in Darkest Dungeon is to drive out a series of monsters—the game’s bosses—lurking within various dungeons. An unnamed protagonist has been called back to their ancestral home after learning that an older relative who, motivated by the boredom of an easy life, dabbled in the occult and unleashed a plague of evil upon his village. Now, to set things back in order, the player controls groups of heroes as they explore labyrinths, killing strange creatures and mapping out grid-based catacombs in order to find and defeat its boss. Each dungeon is presented in two dimensions, with the four chosen heroes walking along a set, side-scrolling path, which is set by clicking on new rooms represented by a blueprint-style mini-map. The fighters belong to specific “classes”—there are plague doctors, grave robbers, knights, holy warriors, barbarians, and more—and engage in Darkest Dungeon’s turn-based combat by using specific skills. The grave robber, for instance, can throw out daggers that hit multiple enemies at once; the knight can deal massive damage or stun a monster; the holy warrior can heal the party.

While putting together an ideal group of four distinct characters to, say, navigate a poisonous swamp area is complex enough, the game also features systems where stress, a gauge that fills by remaining in darkness too long or suffering morale-breaking enemy attacks, can make the characters perform unreliably. Accumulate too much stress and a hero may turn selfish and steal any treasure she finds. Or, she may become fearful enough to pass over her turn or paranoid to the point of refusing to be healed by others. Considering Darkest Dungeon’s extreme difficulty—it features both permanent character deaths and automatic game saves—a single character who suffers from one of these afflictions can thwart even the best-prepared dungeon expedition. To manage these kinds of drawbacks, the player returns to the gloomy town hub. From this area, new characters can be recruited at a caravan (which is useful, since many trips will result in a fatality or two), items and skills can be acquired, and stress penalties can be reduced at the bar, church, or sanatorium. Assigning a nerve-wracked leper character to the gambling table will take notches off his stress metre, making him better prepared for another journey into the dungeons.
Each of the game’s systems interlock neatly, turning simple concepts like stat penalties and RPG-style skill and equipment upgrades into something more than the sum of their parts. Though the Early Access version of the game seems slightly unbalanced—stress often piles up too quickly to feel fair while certain combinations of character skills are a bit overpowered—the unfinished game still does a fantastic job of proving the strength of Darkest Dungeon’s concept. The solid foundation of the game’s core systems is furthered by a remarkably coherent and confident audio/visual style. From monster design to level backgrounds, the game’s hand-drawn art is rich in detail and atmosphere. Coupled with the grim theatricality of its omnipresent narrator (who’s quick to comment on any victory or setback with overly dramatic remarks), the entire experience conveys the darkness of its medieval fantasy world with aplomb.


The charming presentation and simple but complexly intertwined gameplay mechanics go a long way toward urging the player onward through one merciless expedition after another. Though progress in Darkest Dungeon is often a matter of attrition, it’s one of the few entries to the “rogue-like” genre to properly encourage continued play by ensuring that something is always being gained, no matter how small. The give-and-take of an hour with the game—a few heroes are incapacitated by stress, even though they manage to bring back enough money to upgrade others—makes for an extremely compelling experience. As development continues, we can hope for what already works well in the game’s design—the variety in visual design and character classes—to be further refined and expanded upon with new areas and, hopefully, extra narrative elements. Even in its current state as an Early Access release, though, Darkest Dungeon is one of the most interesting and well-executed takes on the dungeon crawling RPG to appear in some time.
File Under: Darkest Dungeon, Early Access, PC, RPG, Strategy