Focus on the Big Picture 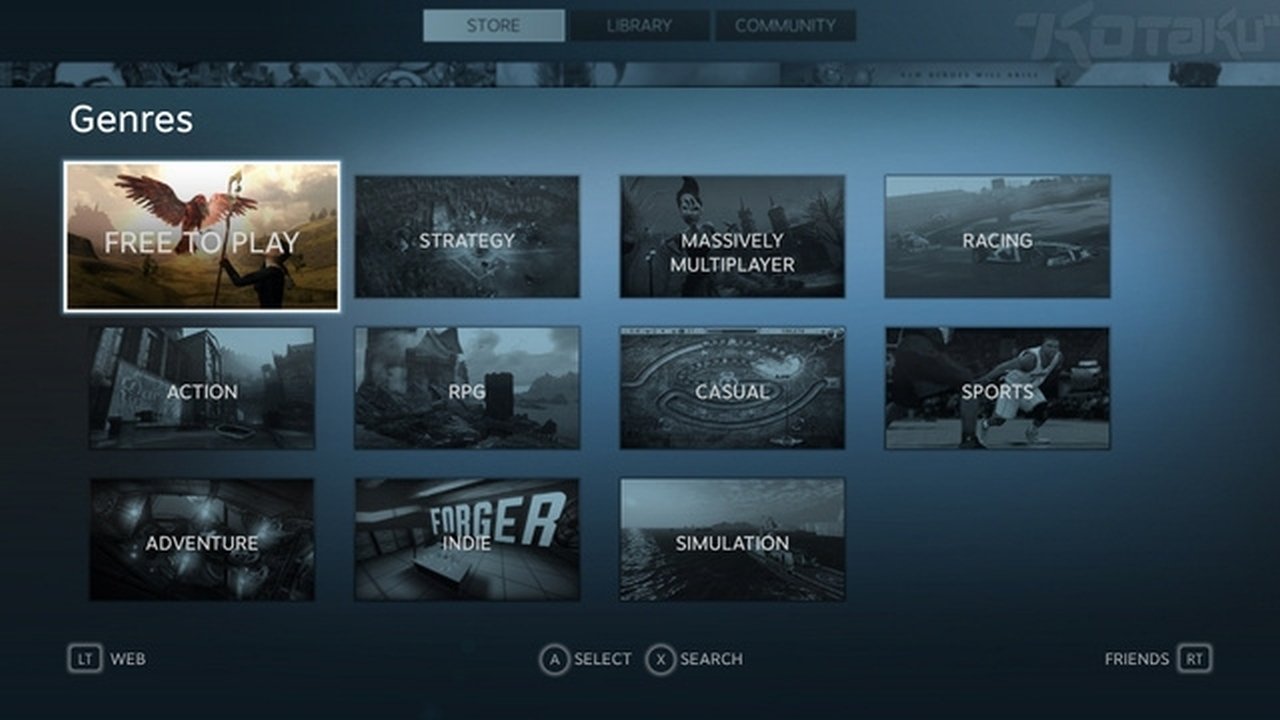 While Valve has been releasing news item after news item for the past couple of weeks (Steam Greenlight), this looks like one of the biggest ones. Valve’s Big Picture addition to Steam will enter it’s beta mode at some point today for users to try out.

Steam’s Big Picture, simply put, is being able to hook your computer up to the back of your television and play your Steam purchased games on your big screen television. Mice and keyboards can still be used but the integration allows (and looks like it was made for) controller usage. 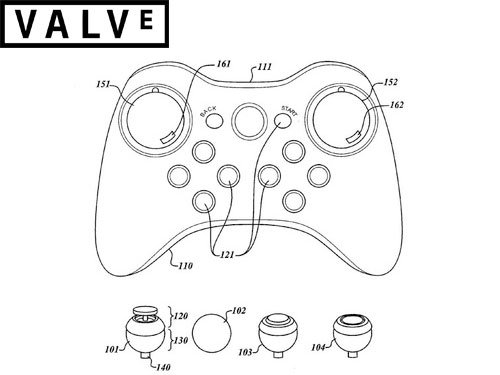 This isn’t the first time gamers have been able to hook up their PC to their television set and play some of their favourite games on the big screen. The problem in the past has always been the change in configuration between a monitor and a television set. The icons weren’t aesthetically appealing and the graphics always seemed to be a little stretched out.

Think of Valve’s Big Picture as the PC’s version of Xbox Live or the PlayStation Network.

The big question which follows the release of Big Picture is where Valve decides to take its next step. It’s no surprise that Valve likes to tease their dedicated fan base with talks of consoles, but rumours have always been pushed back with phrases like “not anytime soon.”

In an interview with Forbes Paul Tassi, Valve’s Greg Coomer said,”…the thing that really makes sense is to build the box that you’re describing,” in an answer to a question about a “Steam-Box,” the first Valve console.

While it may only be a beta session being released today, the concept of jumping from a system where you hook up your computer to the back of a television to an actual console isn’t too drastic. Plus, it’s already promoted new features which would send the Xbox Live and Playstation Network teams into a small panic.

The boot up screen is pretty standard from the looks of it. Simple icons have been placed in a linear fashion to indicate how to get to your library, community, and store. If it had to be compared to any other video game network add on already out there, it would probably be closest to the Xbox Live design layout. Picking the game you want to buy or play is still pretty standard to your Steam account already.

Things shaken up though when a search is required. The new Lotus type keyboard, titled the, “Daisywheel,” is a drastic change from the typical QWERTY keyboard on most other consoles. The best way to describe the Lotus keyboard is by breaking down the actual look and use of it. It looks exactly like a Lotus flower. There are eight “petals” with different letters and characters in each petal. 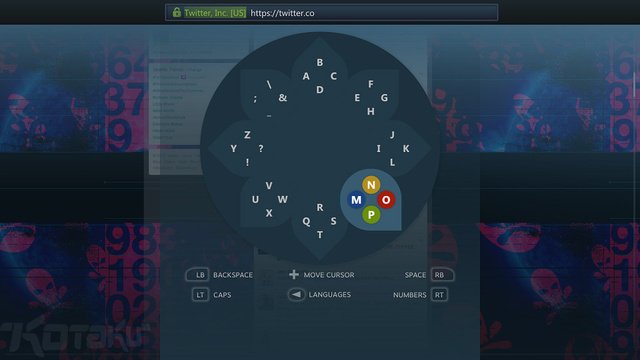 There are four letters to a petal (ABCD, EFGH) until Y and Z. The Y and Z petal houses a comma and a period. These make up seven of the eight petals, with the last petal being used for the @ sign, an underscore, a colon, and a slash. Each individual character or letter has a corresponding button on your controller. Again, pressing the point of using a controller as opposed to a mouse and keyboard.

Valve banging the idea of using a controller into your head isn’t too surprising. Back in 2011, on May 5th, Valve secured the rights to the controller they had in development. They were given the patent number that day (20110105231) and now a year later, a setup dedicated to players being able to use a controller has surfaced.

The controller, if you haven’t seen screen shots of it yet, has about ten buttons, including a start and a back button. There seem to be two analog sticks, but the pads of the sticks seem to be the size of a thumb, if not a little larger. For console gamers, this will either increase or decrease movability in those tight corners. Shape wise, it’s almost identical to an Xbox controller and looks like it will sit comfortably in your hands when playing.

Valve has not confirmed or denied the sale of the controller for Big Picture, however, the same controller has been spotted in the YouTube video Valve released earlier today to promote said feature.

All this leads to questions about competition between Valve and companies like Sony and Microsoft. While Big Picture may not be a console, it very well could be.Steam is also boasting the ability for internet browsing while using Big Picture. The browser has been configured to work with a controller as well. According to their announcement video posted earlier this morning via YouTube, it’s the world’s first, “first person browser.” From the clip, it looks pretty concrete. One of the issues with the PlayStation Network is the lack of an internet browser at all, and although it makes sense for Valve to have one because it still runs on a computer, it’s an added bonus the big name consoles don’t have.

Players can sign in and out of Steam, splitting their time between playing their library of games and checking the latest link on Reddit or sending out a tweet. Users can zoom in and out of photos, play YouTube videos with ease, and even spend mindless hours watching hilarious .gifs of cats.

All this leads to questions about competition between Valve and companies like Sony and Microsoft. While Big Picture may not be a console, it very well could be. Steam has the advantage of carrying all major AAA titles, as well as a ludicrous amount of indie games which has become one of the main draw in factors for Steam. Imagine playing a game like They Bleed Pixels on your big screen television with a controller in hand.

While there are no new talks of a system, Coomer told Forbes they understand exactly what gamers want. “They want a full screen experience. They want to be in the living room. They want to use a game controller. They wanna have a social gaming experience. And we have this platform that lets us ship a significant portion of that experience.” Coomer also told Kotaku, “And if it’s getting involved in shipping some kind of hardware, then we will get involved in doing that if we need to.”

The beta drops at an unannounced time later today and will be for Windows users only. It does state on the website that it will be coming to Mac users soon. Valve has not released a statement as to when a full version can be expected. We are in contact with Valve and will update the story as it progresses.