The Level Up Showcase is an anual event, and on April 5, 2017 seventh anniversary of the occasion.Located in Toronto’s Design Exchange building, over two thousand attendees showed up to get hands-on previews of some of some of the best games developed by students in colleges and universities across Ontario.

Open to the public, Level Up offers something for everyone. Attendees get to try out games from up and coming minds, while many students participating in the Level Up Showcase are given the chance to network with fellow developers and larger companies, potentially serving as their entry point into the industry. The Level Up Showcase has developed a reputation for helping young creators find success by bringing attention to indie titles like the PC exclusive Pitfall Planet, a co-op puzzle adventure game and Runbow, the well-received racing platformer released on Wii U and PC.

All types of different games were playable at the event. One of the more outlandish titles found at Level Up was a game called Cattlefront. Cattlefront is a multiplayer focused game where players are split into opposing alien factions fighting over the planet’s resources which in this case, happens to be cows. There’s a constant struggle between balancing scoring points and attacking or defending against opponents. Rounds are timed to about 2 minutes, perfect for short sessions with groups. The development team behind Cattlefront really wanted to try something new with their game, combining their very different ideas to come up with what turned out to be a very unique and somewhat strange title.

Another game on display was a simple dodgeball style game set in space called Destroid. Players control a UFO on a 2D plane, grabbing hold of nearby asteroids and tossing them at other players. The game’s controls were easy to learn, using only two buttons, making it easy for newcomers to join in. The asteroids you pick up revolve around your ship, allowing for different strategies of whether you want to use them offensively or defensively. At the end of each taking note of the gameplay stats recorded at the end of the match I played. An impressive fact about Destroid was that the majority of the game’s eight-month development cycle went to creating a completely new engine from scratch rather than using a pre-existing one.

Mobile games made an appearance at Level Up as well with games such as COLHEX, a title made for iOS devices. Supporting up to six players locally on one device, COLHEX has players select a colour before being presented a field of hexagons. Players are then given 30 seconds to tap and claim as many hexagons as possible, the one with the most when the time ends being the winner. One of the interesting things about the game is that while playing, player’s hands often get in the way of each other, sometimes resulting in tapping the wrong colour which could accidentally help your opponent win. Rather than a being a design flaw, this is actually considered part of the gameplay, forcing players to pay attention to more than just what they’re seeing onscreen. COLHEX’s sole creator Alessandro Profenna gave his opinion on mobile gaming. He stated that he feels mobile gaming works best for smaller titles, focusing on quick gameplay that can be enjoyed in groups rather than the long-term commitment offered by many console games. COLHEX is still being worked on with potential features like a single player likely to be added. The game will see a free release on the App store when it is completed sometime this year.

Another mobile game shown was called Tram-panic. The game has you take on the role of a streetcar driver, rushing back and forth to pick up passengers while avoiding certain ones that lower your score or cause certain status effects. One of the most unique things about Tram-panic is its visual style. Using pixel graphics, Tram-panic recreates what truly looks like a retro game styled version of Toronto. The game served as a reminder of how unapologetically Canadian Level Up was and that some of these games would only be found here. Tram-Panic won’t remain a Level Up exclusive forever though. The game is planned for release on mobile devices soon.

One of the larger games shown off at Level Up was Into the Vortex, a third-person stealth action game filled with puzzles.  Running on the Unity engine, the sci-fi stealth game has players shift reality in order to avoid enemies and puzzles, solving puzzles and finding new routes around the map using abilities given early in the game. Into the Vortex was inspired by famous stealth titles such as Assassin’s Creed and Deus EX: Human Revolution. The amount of detail already put into the game was one of the most impressive aspects about it. Roughly five months into development, the six-person team created a lot in such a short span of time. The demo featured multiple detailed areas, functioning AI and a number of different puzzles. On top of all that, the build of the game had full story cut scenes.

One of the last games previewed at the Level Up Showcase was arguably one of the most popular games shown at the event. Coming in third place in the audience choice awards category, Twin Switch garnered a lot of attention. Built on the Unity Engine, the game is a two on two arena shooter that blends mechanics found in third-person shooters and twin stick shooter, switching to a top-down perspective when targeting opponents. Twin Switch was developed with the idea of being a competitive twin stick shooter, a rarity within the genre. The game’s style is reminiscent to Halo’s multiplayer, especially with the game’s sci-fi combat armour and arena designs. When playing Twin Switch, the game looks and feels as though it could’ve shipped as is. The game was graphically impressive and seemed to run perfectly with power-ups scattered around the map to add an extra layer to the already polished gameplay. 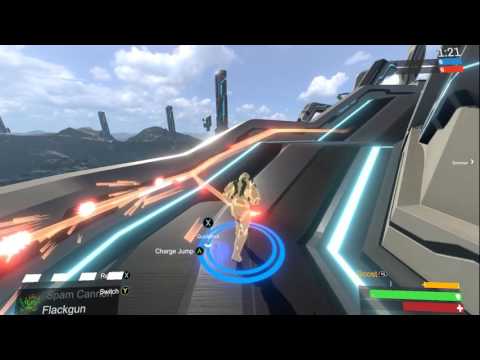 It’s no surprise that with such a high quality of games being shown off, larger developers have a lot to gain from an event like Level Up. Ubisoft, in particular, sponsors the event, helping to judge the best games previewed. The company seeks out much of its talent from Level Up, often hiring those who participate. Level Up also helps developers see different types of games that wouldn’t normally make it into the public eye.

Diversity is shown all over as developers create for platforms, old and new. Some of the best put together games made use of virtual reality technology such as the HTC Vive, a platform not many developers have used yet. My time at the Level Up Showcase taught me the way that gamers inspire gamers. Many of the students mentioned that it was their love of games growing up that brought them to pursue game development as a career and that Level Up managed to teach them even more beyond what they learned in class, gaining experience by being able to speak with others in the same field. Many of these

My time at the Level Up Showcase taught me the way that gamers inspire gamers. Many of the students mentioned that it was their love of games growing up that brought them to pursue game development as a career and that Level Up managed to teach them even more beyond what they learned in class, gaining experience by being able to speak with others in the same field. Many of these

Many of these fledgeling developers will go on to join larger development teams or create their own studios, continuing the chain of inspiration for future students at the next Level Up Showcase.