Smile (and Wave) for the Camera 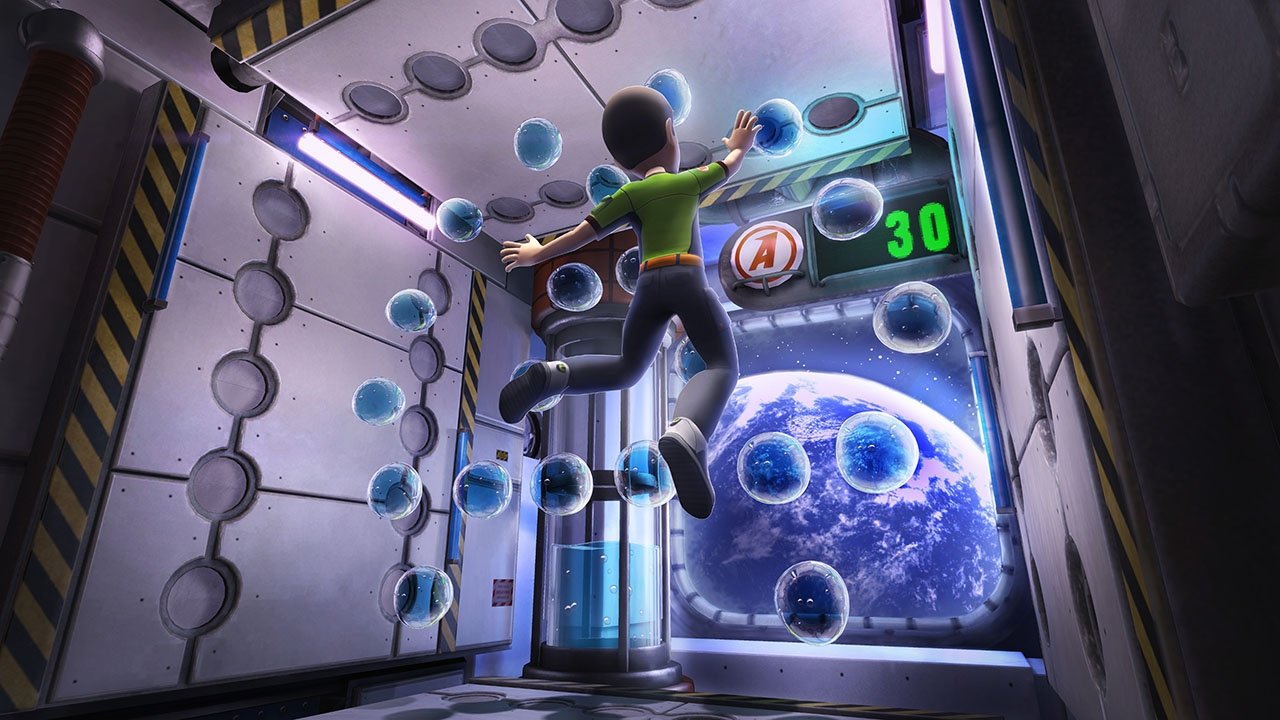 At the end of the summer, I wrote an ambivalent preview of Kinect following Microsoft’s X10 event in August. The experience was noisy, crowded, and generally chaotic, and while I liked the Kinect concept, I was skeptical about Microsoft’s implementation of the technology.

Now that Kinect is finally on shelves and I’ve had the opportunity to spend some alone time with the machine, I’m happy to report that my early impressions were unnecessarily harsh. Kinect is much better than I’d expected, and it’s got the potential to reshape the way that people think about digital interactivity. That said, it is imperfect, and Microsoft will have to surmount a few noteworthy issues before they can completely reconfigure the landscape.

Your Body is the Controller

Microsoft is selling Kinect as a camera that turns your body in a video game controller, and that’s an accurate description of what you’re getting. Kinect allows you to interact with your TV screen with a mere wave of your hand, and while the efficiency leaves a bit to be desired – it takes a about a second to trigger menu progressions and Kinect can’t perceive the finer motions of fingers, etc. – there’s no denying that the device feels like a gadget from the future.

Kinect is blissfully easy to install. You have to know how to connect a game console to your television, and I’ve hooked up a few too many to know how difficult that might be for a novice. Still, this is the era of the DVD player, so wires shouldn’t present too much of a challenge. Once everything is plugged in, the set-up involves little more than pressing A and sitting in silence while waiting for the microphone to calibrate.

That’s pretty much everything you need to know to get started. Kinect is functional and there’s enough novelty value to make it worthwhile. I’m not convinced that it’s where you’d want to spend $150, especially if you consider yourself to be a serious gamer, but the casual crowd should like it and you’re definitely not getting ripped off.

Getting Down and Dirty

As impressive as the technology may be, the blunt truth is that Kinect looks and plays more like a Nintendo Wii than an Xbox 360. The software offerings are still painfully sparse and there are a few functionality issues that cannot be entirely dismissed. Lag is occasionally a concern and there are hiccups whenever someone else walks into the camera’s field of vision.

Fortunately, Kinect does an excellent job of recovering after such disruptions. It will consistently recognize the person standing in front of the TV as the primary player and I never encountered any game-breaking interruptions. Kinect won’t work as well in a crowded environment since the little disturbances become more frequent and too much noise will cloud the microphone, but it shines in a family living room setting with a small group of rotating players.

The most legitimately troubling problem is that while Kinect works well, it only works well within highly specific spatial parameters. You need at least 6-to-8 feet of space in order to move comfortably, and 8-to-10 feet is ideal. Lag and loss of communication become far more onerous the closer you are to the camera and there’s an increased chance that you’ll accidentally wander out of the frame.

Those conclusions are based entirely on my own testing. Kinect ran smoothly whenever I stood at nine feet, but it risks becoming unplayable at six. I was halfway through a River Rush adventure when the camera stopped recording my jumps, and I was unable to restore proper communication until I stepped back into the “Best” play area.

The spatial shortcomings could ultimately hinder Kinect’s growth as a hardcore gaming platform. If you live in a cramped urban apartment, Kinect just doesn’t have much to offer, and that may not be likely to change anytime soon.

The sensor can also be a bit discriminatory with regards to body type. Kinect cannot recognize people (read: children) shorter than three feet tall, and you probably have to clear four feet for best results. The camera will lose sight you if you sit down, so even controller Kinect hybrid games might prove problematic.

The unusually tall will encounter similar problems. My editor – who is over six feet tall – would literally lose his head while standing in front of the camera and Kinect never worked quite as well for him as it did for 5’6” me.

Kinect did pass our other stress tests with flying colors. I played Kinect Adventures while wearing a parka and then wrapped the coat around my legs as a makeshift skirt, and neither circumstance seemed to give Kinect any serious trouble. If anything, putting on layers of baggy clothing just made me uncomfortable, and I was more alive to the limitations of my wardrobe than the limitations camera.

That’s the reality of controller-free gaming. You need to utilize all of your limbs, so anything that restricts your movement will have a detrimental impact on your ability to play. Loose garments may create some lag, but it’s virtually imperceptible and you should be fine as long as you’re prepared for a workout.

The voice recognition, meanwhile, is astonishingly solid, as phrases like “Play Disc” will reliably lead to appropriate effects. You need to speak with a clear, unaccented voice – I spent nearly half an hour tampering with my vocal chords in an effort to gauge the abilities of the recorder and a nasally voice might as well be no voice at all – but Kinect does a decent job of picking up quirky intonations and some forms of slurred speech.

Sadly, the voice features don’t yet have too many practical applications. The console is only programmed to recognize specific pre-set phrases, so it’s nowhere near Star Trek and it’s often easier to use your controller. You still have to stand up to insert game discs and On/Off commands are completely out of the question.

Yet even with the minor shortcomings, Kinect is doing things that retail has never seen before, and it’s at least worthy of some attention. I won’t tell you to buy Kinect – I’d wait and see what kinds of games are in the works – but I won’t tell you not to buy one, either.

While I’m not going to review every Kinect game – you can flip to the reviews section if you’d like a more complete rundown of the early offerings – I will discuss Kinect Adventures, which ships with the hardware and may be the best game with ‘Kinect’ in the title.

Like Wii Sports, Kinect Adventures is a collection of five simple mini-games that are designed to showcase Kinect’s motion control capabilities as much as they are to entertain, and the disc performs both functions admirably. Everything works about as well as could be hoped, and while all of the general complaints mentioned above do apply, the game makes for solid living room recreation.

Some of the activities are more enjoyable than others. Rally Ball – in which you use your body to deflect bouncy balls and destroy wooden blocks – is easily the worst of the bunch. It’s impossible to guide objects in any particular direction, so picking up the last two bricks is primarily a function of luck.

The other games are thankfully more consistent. Space Pop is a collect-the-orbs challenge that utilizes an intriguing zero gravity effect – hold out your arms to hover in place – while 20,000 Leaks similarly shows off Kinect’s limited (but reliable) depth perception functionality. You can use any protruding limb to plug the leaks that appear in front of, below, and beside your character, and Kinect manages to track the contortions of your body with a surprising amount of precision.

That’s doubly true with Reflex Ridge, which asks you to jump, duck, and dodge your way around a series of padded obstacles. The responsiveness is fantastic, to the point that Reflex Ridge feels more like an exercise routine than a video game, and that’s intended as a compliment. The game forces you to utilize your entire body and is consequently far more immersive (and more tiring) than a typical video game.

River Rush, on the other hand, isn’t quite as engaging. It’s better than Rally Ball, but it’s essentially a dumbed-down version of Reflex Ridge, and consequently isn’t as interesting as its rollercoaster cousin.

The overall aesthetic presentation is relatively standard, with the usual unlockable video game trappings and full Xbox Live integration. There’s not much point to playing online, but the gameplay is smooth and it may be preferable to local multiplayer, if only because it cuts down on in-house collisions.

Kinect Adventures does do an admirable job of rewarding players for completing challenges. You can earn bronze, silver, gold, and platinum medals, while finishing solo adventures unlocks achievements, avatar equipment, and in-game merit badges and trophies.

The tiered system ensures that the game remains accessible to gamers of all experience levels, and – more importantly – it gives you an incentive to keep playing. That’s more than could ever be said of the what-you-see-is-what-you-get Wii Sports, and Microsoft deserves some credit for trying to introduce casual players to some of the common conventions of gaming.

Still, you’d do well not to harbor any false illusions. Kinect Adventures is a giveaway title, so these are not the deepest games on the market. Once the initial luster wears off and you start to get bored, your interest will plummet like an anvil dropped out of an airplane. The game becomes fun again if you wait for a few hours before you return, but Kinect does remind you to take a break about once every 45 minutes, and that’s as much for your own amusement as it is for your physical health.

It’s also worth mentioning that Kinect is a camera, so it will take (and save) lots of pictures of you doing ridiculous things. Fortunately, the photos are not automatically uploaded to the Internet and you can disable the feature if you’re unwilling to share. All told, the camera can feel a bit intrusive but Microsoft seems to have taken appropriate steps to ensure your privacy.

balance, Kinect Adventures is solid debut title that hints at even better things to come. I’d give it a 73/100, and that’s not a bad way to make an entrance.

The Future of Gaming?

Kinect may lack the precision needed for projectile warfare, but there’s enough here to give game enthusiasts plenty of cause for optimism. Microsoft’s latest device is an impressive piece of technology that should lend itself to some unique gaming applications, and it’s good enough that – as with Sony’s Move – the software will ultimately determine whether or not Kinect flies or flounders. That’s a good thing, and it will be interesting to see where we go from here.