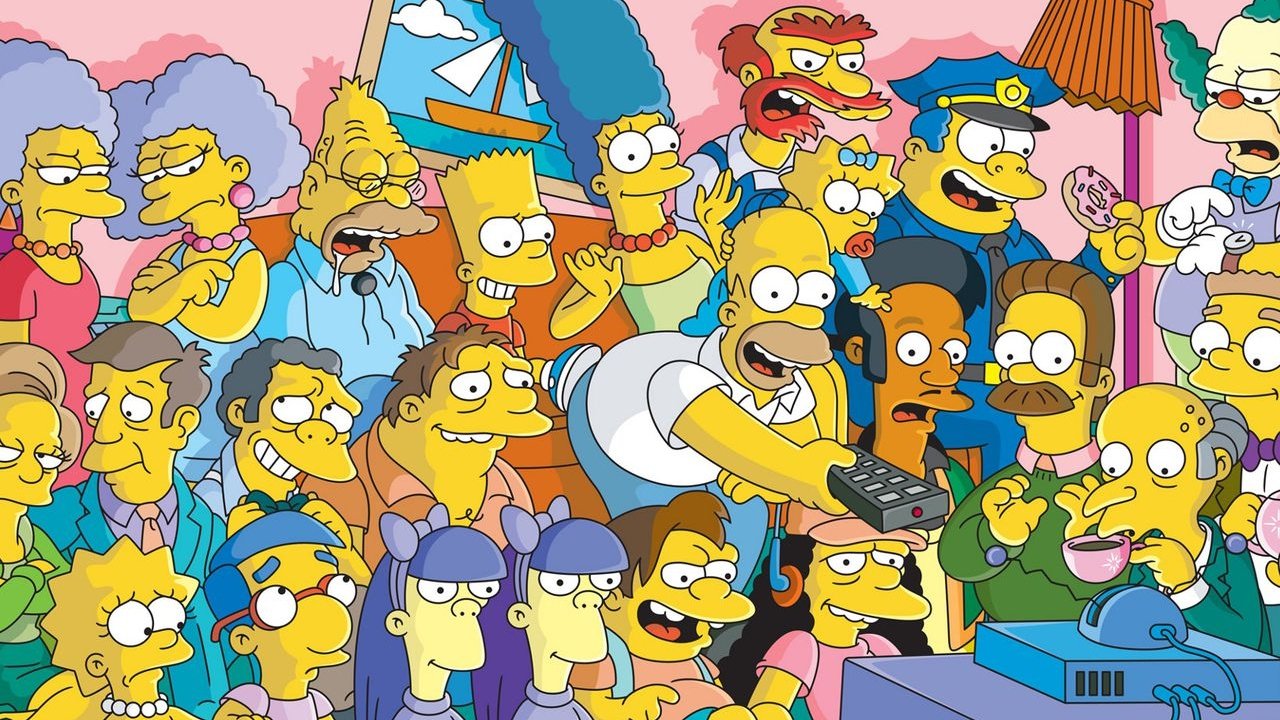 The Simpsons have come a long way since an old drunk made humans out of his rabbit characters to pay off his gambling debts, or however Homer, Marge, Bart, Lisa, Maggie and the rest of the Springfield gang came to be. Needless to say though that the creativity and the longevity of the series has surpassed all expectations, and with each passing year it seems that The Simpsons will continue on into the 30th century (as predicted on Matt Groening’s follow-up to The Simpsons, Futurama). In the meantime though, we can look at the last 20 years and take from the first 449 episodes the Top 10.

In defiance of conventional wisdom, these two episodes prove that there’s still occasionally some bite in the show’s satire. The more recent example is season 17’s “The Monkey Suit” which features a typical Simpsons trial situation pitting evolution against creationism. The centrepiece gag is when southern lawyer Wallace Bravy, a parody of William Jennings Bryan from the Scopes Monkey trial, holds a baby deer in court and says, “Now Bambi, who started that forest fire that killed your mother? Evolution?! My my my…”

Season 15’s “Bart-Mangled Banner,” meanwhile, featured a rather astute and cutting send-up of American patriotic fervour in the wake of the Iraq War and the 2004 US Presidential election. After Bart’s accidental mooning of the stars and stripes, the Simpsons family is arrested under articles of the “The Government Knows Best Act” and sent for “re-education” on Alcatraz Island along with Bill Clinton, Sesame Street’s Elmo and the last living Democrat. While people like Michael Moore and Al Franken were being labelled as proverbial pariahs by the right wing, The Simpsons quietly and expertly savaged everything about the War and Terror, and left us with the haunting image of Elmo hanging himself in his cell out of desperation.

After three seasons of being that dopey kid that sits at the back of the Grade 2 class, Ralph emerged in this episode as one of the show’s A-List secondary characters. A pity Valentine from Lisa starts an appropriately touching story of first love lost and friendship found as Lisa struggles to relieve herself of Ralph’s undying affection.

In typical Simpsons fashion, the episode mixes salty and sweet highlighting Chief Wiggum’s inherent crookedness and Ralph’s almost charming, unfiltered honesty (“The doctor said I wouldn’t have so many nosebleeds if I kept my finger outta there.”) But perhaps the best joke of the episode is the writer’s cheerfully corny Valentine’s card puns like “I Choo-Choo-Choose You” with a picture of a train and “Let’s bee friends” with an image of the yellow and black striped bug.

You may remember him from such films as “Preacher With a Shovel” and “Today We Kill, Tomorrow We Die”, but this episode gave actor Troy McClure something we never thought he was capable of: depth. Troy gets a sudden career resurgence when he’s seen out on the town with Marge’s sister Selma. In one fell swoop Troy’s professional life is revived having lain to rest some rather ghastly rumours concerning certain actions at the aquarium.

A lot of the episode’s humour comes from the show’s ability to skewer Hollywood culture done here by introducing Troy’s agent MacArthur Parker (voiced by Jeff Goldblum) and the Falco-inspired musical “Stop the Planet of the Apes, I Want to Get Off.” But as always, the episode was a great showcase for the incomparable Phil Hartman as the voice of Troy. The character was retired after Hartman was killed by his wife Brynn on May 28th, 1998.

Homer learns about more than nuclear physics after the Nuclear Regulatory Commission insists he goes to college in what was Conan O’Brien’s final solo writing credit on the show. (His last episode ever was the co-penned Treehouse of Horror IV) Homer’s first foray through the gates of Springfield University is fraught with tough lessons from the school of hard knocks.

No, not all college deans are bitter and crusty, not all college freshmen are ignorant and drunken, jocks and nerds can co-exist – peacefully, and not all problems can be solved with a zany scheme. Cheating is wrong is also in there somewhere, but more importantly, despite what anyone at MIT thinks, Captain Picard is not better than Captain Kirk. Oh, and one more thing: you must find the jade monkey before the next full moon.

There have been a lot of great Sideshow Bob episodes over the years, but this one was the first to feature a story about Bob not trying to off a certain mischievous little scamp in short pants. A grassroots protest led by conservative radio host Birch Barlow (read: Rush Limbaugh) sees Bob released from prison and run for Springfield’s mayor with the endorsement of fellow Republicans Mr. Burns, Rich Texan, Count Dracula, Krusty the Clown and Ranier Wolfcastle.

Airing mere weeks before the real life Republicans swept the House and the Senate, The Simpsons seemed to have an oddly prophetic tone and by far, the episode had the best explanation of American politics I’ve ever heard. Or as Sideshow Bob put it: “Your guilty consciences may force you to vote Democratic, but deep in your hearts you long for a cold, Republican leader who’ll cut taxes, brutalize criminals, and rule you like a king!” It’s been more or less downhill after this for Robert Underdunk Terwilliger as he descended more and more into cartoonish super-villainy.

This episode deserves to make the list if only for the fact that it introduced the world to the concept of the “Leftorium” a curio store catering only to people who are left-handed. The B-story about Bart learning karate isn’t that great, but there’s more than enough going on with Homer’s excessive Schadenfreude at Flanders’ expense to keep the episode rolling.

Like Sideshow Bob to an extent, more recent seasons have seen a Flanders more cast in self-parody, but back in season three, this episode added some much-needed depth to the Simpsons’ better-off next door neighbour. We also learn that behind every utterance of “Shut Up Flanders,” there’s a genuine friendship between the Simpsons and the Flanders, no matter how much Homer may disagree. Regardless, the Leftorium is saved from going out of business, giving us years of humour while still failing to answer how an all-left-handed store can stay afloat in such a limited market.

There have been many great Krusty moments over the years. Whether he’s hosting his “Krusty Komedy Klassic” (“KKK? That’s not good”) or doing a sitcom parody called “Mad About Shoe” (“Kiss me baby, no tongue”), Springfield’s most renowned Jewish clown is always good for a laugh.

But perhaps never more so than in this episode where Krusty is canned after a ventriloquist’s dummy named Gabbo steals his audience share, and a star-studded special organized by Bart and Lisa is arranged to get the Klown back to the top. Not only is “Kancelled” a great send-up of stunt casting, but it features some pretty incredible talent including Johnny Carson, Elizabeth Taylor and Bette Midler. Plus this episode also introduced us to Eastern Europe’s favourite cat and mouse team: Worker and Parasite.

In a sign of things to come, the 100th episode of the series kicks off with Marge asking Bart about whether taking a family film to class for show and tell is a good idea by saying, “How would you like it if 20 years from now people were laughing at things you did?” Well, 20 years later we’re still laughing and this episode is a great example why. We get the introduction of Maggie’s nemesis Baby Gerald, AKA: The Baby with One Eyebrow.

We learn that Flanders’ parents were freaky beatniks that wrote poetry and everything. And once and for all it was proved that there’s nary an animal alive that can outrun a greased Scotsman. But mostly this was about the unusual friendship that can develop between a hell-raising young boy and his school principal, and that maybe their differences aren’t so great after all. We’re still waiting to read Billy and the Cloneasaurus though.

Also known as the Cat Burglar episode, this story is so beloved as one of the series’ funniest that the writers even tried duplicating it in season 13 as “Poppa’s Got a Brand New Badge.” But “Homer the Vigilante” did feature one of the show’s greatest syntheses of casting and character by using the voice of Sam Neill (Jurassic Park) for gentleman cat burglar Malloy.

The laughs just keep coming, from Lisa’s sax replacing jug to the town of Springfield’s It’s a Mad, Mad, Mad, Mad World-like scramble to find millions of dollars buried under a big T. Indeed, the episode is filled with references to 60s benchmarks like The Pink Panther, Dragnet and Dr. Strangelove and makes the episode one of The Simpsons’ best “find the reference” episodes. (Is that Phil Silvers driving his car into the river after being tricked by Bart?)

As for Homer, he proves that he may not be the best nuclear safety inspector in the world, but leading a drunken posse around is where he really shines. After all, there are some circumstances where you don’t need a thinker, you need a doer! Someone who’ll act without considering the consequences!

The point maybe argued ad nauseam, but for my money the best episode of The Simpsons is this Conan O’Brien penned ode to the dangers of giving power to the people, because if you leave it to the people, they’ll get taken in by some huckster that gives you a third-rate monorail. Or a Popsicle stick skyscraper. Or an escalator to nowhere. But mostly this slick parody of The Music Man was a great showcase for Phil Hartman, who created a third memorable Simpsons’ character in monorail developer Lyle Lanley.

Leonard Nimoy also started a long and fruitful relationship with The Simpsons by lampooning his In Search Of… persona more than his Star Trek role. This is also one of the rare episodes that features a genuine action sequence, with the skeptical Marge doing some investigating at Lanley’s last sale in North Haverbrook and Homer doing an impressive lasso trick with a metallic M and a giant donut. All this and a big possum named Bitey to make this the Best. Simpsons. Episode. Ever.

File Under: The Simpsons, Top 10