One of the games to come out of left field at E3 2017 was Dragon Ball FighterZ. When it showcased at Microsoft’s press conference with a stunning gameplay trailer. All of that online attention quickly added up on the first day when the show floor opened, and found Bandai Namco’s booth packed with players at all times and their walls plastered with awards from various publications. I only played a few matches of the upcoming skill-based fighter, but my time with Dragon Ball FighterZ was easily one of my favourite highlights of the entire show.

Dragon Ball FighterZ is a 3v3 fighting game developed by one of the most talented studios in the genre, Ark System Works. With the minds behind Guilty Gear and BlazBlue working on the project, Dragon Ball fans can be assured that the studio won’t only strive to satisfy the loyal enthusiasts of the popular source material, but that the new fighter will be geared towards skill-based competitors as well.

The demo build of Dragon Ball FighterZ only had a teaser roster of six characters, which included staple characters like Goku, Gohan and Vegeta. My time was spent learning the villains of the build, which I expected to be the more unique fighters of the game due to their gimmicks and designs. This left my team comprised of the world conquering Frieza, the playful Majin Buu, and the egotistical bio Android known as Perfect Cell.

Kicking things off with Frieza, the infamous villain plays akin to a keep-away character, launching waves of death beams and large blasts to keep opponents at a distance and control their positioning. This is where I feel Frieza dominates in Dragon Ball FighterZ because of the wealth of options players have at their disposal. Once someone enters into Frieza’s close-range however, a single whiffed punch or kick can mean a big punish from the villains tail and combo into a flurry of punches to push them back to the other side of the screen. One of Frieza’s supers is the ability to transform into his Golden Form from Dragon Ball Super, but I felt the super didn’t really add anything to Frieza’s combat potential. While the transformation looks great, I wish it was more than a power buff because Frieza could use more close ranged moves to apply more pressure to opponents.

Majin Buu was insanely fun to play as due to his unpredictability. Due to his hulking size, players may expect Buu to be a slow and heavy grappler, but he’s actually an aggressive fighter that quickly dishes out big damage and soaks up a lot of hits. His moves are easy to block at a distance, but Buu’s best strength is that he can be used to constantly apply pressure from all parts of the screen and keep your opponent locked up. The best way to take out Buu is to use supers and teleports to interrupt him, but that risks using up all your meter to KO a single character.

Cell’s playstyle in Dragon Ball FighterZ was very similar to what I saw from Goku players, with Cell going into a large combo and then maximizing damage with a huge Kamehameha wave at the end. Cell’s jack-of-all-trades moveset made him the core starter of my team, allowing me to feel out how my opponent wanted to fight and then act accordingly by switching Cell out for either Frieza or Majin Buu as a counter-pick. If Cell stayed in however, I quickly spammed the screen with Buu and Frieza’s assist attacks, opening up the opponent for a huge super or a combo loop in the corner to dominate the fight. 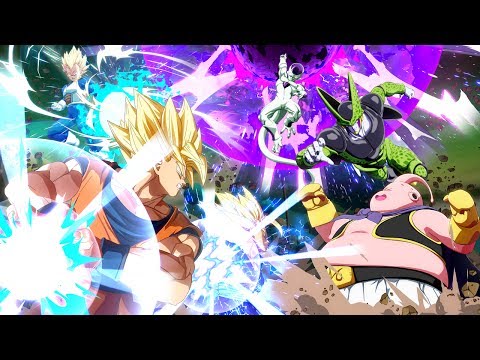 I can’t wait for Dragon Ball FighterZ to makes its grand appearance on the EVO stage. Even with just a small teaser roster of six incomplete characters, the fighting game community is thrilled at the idea of a competitive Dragon Ball fighter to add to the tournament lineup. Ark System Works has a gem of a license on their hands and the production value of the characters and the gameplay shows that this studio isn’t playing around. Solo players haven’t been neglected either though, with an assortment of modes planned along with what I expect to be an original story mode. Dragon Ball FighterZ releases early 2018 for PlayStation 4, Xbox One, PC, and with enough fan support on Twitter, even the Nintendo Switch.