Any first-person survival game with a procedurally generated setting that involves space travel is bound to get a suspicious side-eye after the disastrous launch of No Man’s Sky last year. The fanfare and explosive hype behind that game got so out of hand that it led to hardcore players pre-emptively calling it “the last game they’ll ever need”, which only turned what could have been an average—if flawed—space sim into a lightning rod for one of the biggest PR disasters in recent gaming memory. Fortunately, developer Radiation Blue and publisher Team17 seemingly have a much better understanding of how to handle their upcoming title, Genesis Alpha One, pitching it as a combination of roguelike, FPS and base-building in the vein of FTL or the recent XCOM titles.

In the setup to Genesis Alpha One, the earth has become uninhabitable due to war and three corporations have sent out ships to scout for new planets to colonize and secure humanity’s future. You are the captain of your own fully customizable Genesis starship; one of the last hopes of the species’ survival, and your objective is to find a planet with livable conditions. Along the way, you must mine materials from other planets, manage your ship’s resources, deal with aliens that can invade and infest the lower areas of your base, and clone new species by fusing alien and human DNA. 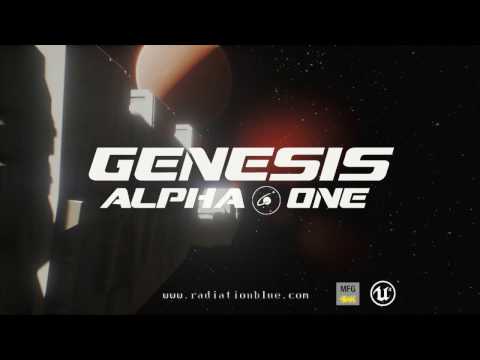 The demo played out from a first person perspective while exploring the ship, but a lot of time will likely be spent in menus. Each section that you build serves a different purpose, including engines to facilitate space travel, docks to hold and send out harvester ships to find materials to build more sections, and clone chambers to experiment with clone DNA. The crew on the ship are clones that function as both workers and a “life” system—should you die, you take control of a clone, and once you run out of clones, you lose. Both you and the other clones can be killed by the aliens that occasionally stow away on your harvester ships and burst out as soon as they land in the dock, and if even one alien creature escapes, it can set up a nest in your base’s hidden areas and create more aliens to kill your clones while you’re not paying attention. Taking care of aliens is done via FPS combat, with up to four weapons available in your inventory. Although it wasn’t shown in the demo, it is possible to leave your ship and go to alien planets, so presumably, the combat will be expanded on more closer to release.

Another factor is creating new clones, which is done by building cloning chambers. You can fuse alien DNA from the aliens you kill with human DNA and create new species with different abilities. This is where the roguelike elements come in: one of the upgrades you can unlock by playing the game for more than one run is new DNA and abilities to experiment with. The other major element is that the map of planets you come across is completely different in every playthrough, with presumably new dangers and rewards getting unlocked the more runs you play. You can also customize your ship by changing the colours and naming the rooms, although the makeup of your ship’s sections is chosen from one of three presets corresponding to the three corporations that are part of the game’s setting.

The ingredients of Genesis Alpha One, individually, are ones we’ve all seen before several times, but when presented in the demo as a complete package, I saw a potentially addictive experience. The big question—as with most roguelikes—is whether or not there is a reason to keep playing once you’ve completed the goal of finding a habitable planet, and how many unlockable elements there are that can give the game the 100-hour shelf life of the most successful roguelikes. The gaming audience isn’t exactly chomping at the bit for new space sims with the memory of No Man’s Sky still fresh in everyone’s mind, and roguelikes are saturating the indie market to the point that the bubble is certain to pop eventually. Genesis Alpha One has an uphill battle to climb right out of the gate. If it can overcome the odds, though, it can fill the emptiness that so many gamers have been feeling ever since this time last year.