A Stunning Combination of Art and Gameplay
Amy Chen | July 2, 2018

Think of a mix between Skullgirls and an RPG adventure on a 2D platform. That’s what Indivisible, developed by Lab Zero Games, is at the very surface. However, what makes Indivisible really stand out are its charming characters and stellar artwork.

Players begin the game as Ajna, who has been trained in martial arts for the sake of defending her home. One fateful day, when enemies attacked, she discovers a mysterious power that lets her recruit allies into battle. Players grow to adore and cheer for these additional characters, as they get upgraded and defeat foes visually appealing attacks.

Take Zebei, for example. He can pepper his enemies with a barrage of arrows, easily turning them into a pincushion. Hailing from a nomadic tribe, he has always felt as if something was missing something in his life. Joining Ajna and other fighters like the brusque, ex-military commander Tungar, he slowly, but surely finds somewhere he truly belongs. Zebei is also a nod to Mongol history, especially with his weapon of choice and the very appearance of it. Did you know that his name is also very reminiscent of “Jebe”? Jebe was one of Genghis Khan’s generals, who was praised for his archery skills. In Mongolian, his name means — you guessed it — “arrow.” The history lover within me lives for the small but researched details like this.

This type of diverse character design isn’t limited to the team Ajna recruits. Even the enemies get time to shine with their unrelenting, yet visually appealing attacks. The artistic quality of Indivisible is remarkable. The details in colours, historical references, shading, and even the non-combat animations are all there.

Indivisible sets the bar high in this aspect when it comes crowdfunded games development.

As Ajna jumps, runs, and fights her way through the story, players also get to explore dungeons and interact with them. People always tell you to not run with scissors, but axes? Axes are fine. In addition to being a weapon, they can cleave through vines, opening up the map for more exploration.

Now for the controls. Booting the game up on the PC is fine and dandy, but then the game would ask you to set up your controller, indicating that it was made with more of the PS4 or another console in mind. During the tutorial, it didn’t manage to show you a keyboard when you’re on PC. Deciding which keyboard buttons to substitute as controller buttons can be a bit confusing. These issues will without a doubt be fixed before release, but for the demo, it did make things a bit more tedious while testing. But even with these issues, the game controlled well and was easy to get into and get a feel for the experience.

The music, by Hiroki Kikuta, only makes you want to keep playing the game. It creates this feeling of adventure and listening to it helps with the immersion. Indivisible’s sound effects work well whenever Ajna attacks, defends, and take damage. They help build the mood during the battle, indicating a sense of danger and the need to finish up a battle quickly before your hit points reach zero.

While Indivisible has months worth of development left before it is released, what is on display right now is impressive. Once get into the groove of the game and how it all works, there is a deep and rewarding system under the stunning exterior. Lab Zero Games have built an exciting new release with Indivisible, and I for one am excited to jump into the final game when it hits console and PC in 2019. 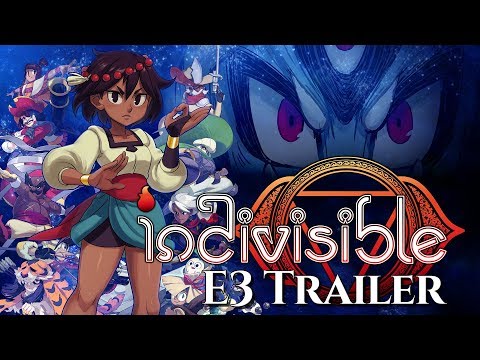