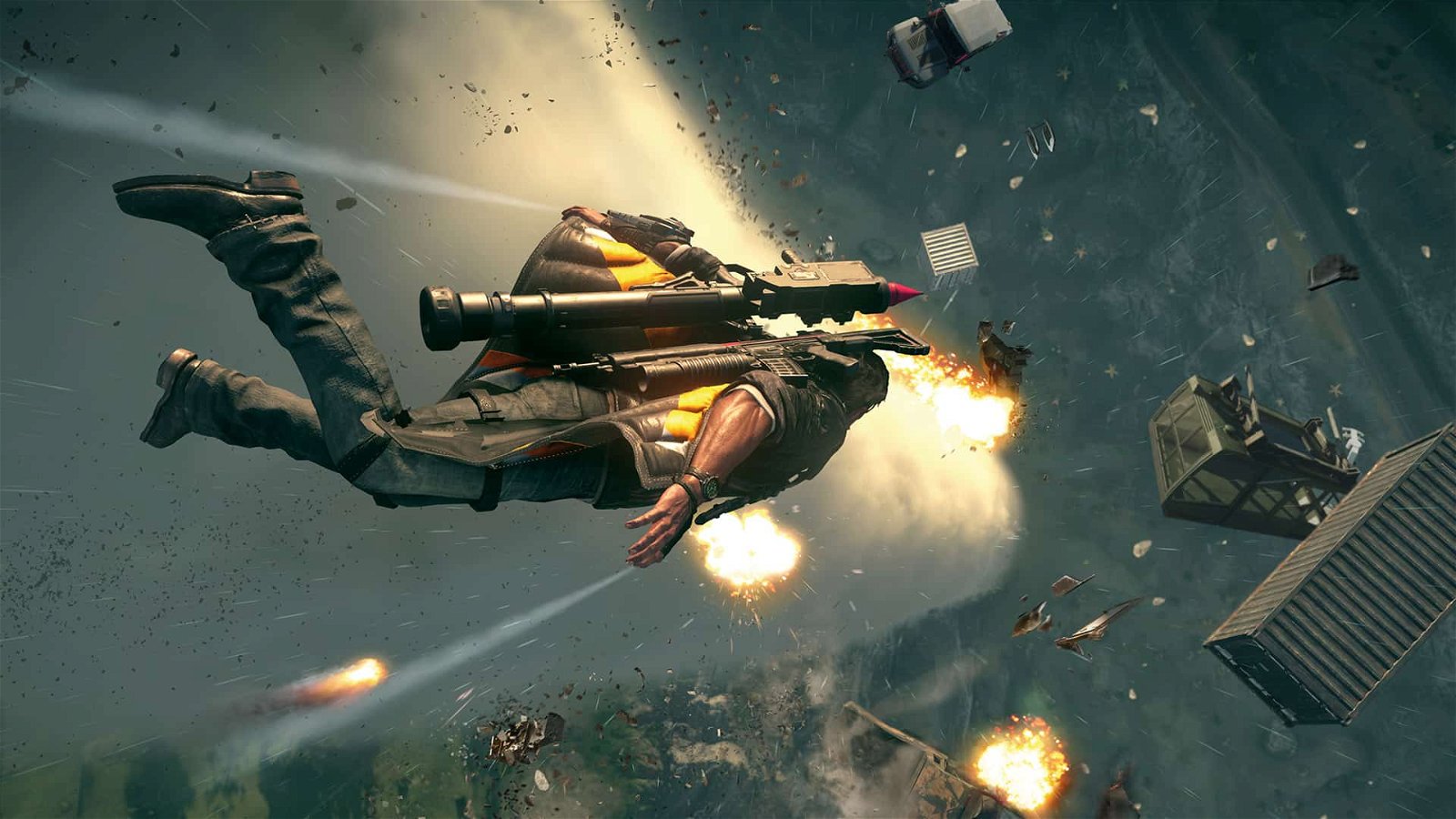 Everyone is stealing from the wrong open-world video game companies. These days, sandbox games are either iterating on Rockstar’s filmic crime epics or Ubisoft’s tower-laden crafting adventures, when the Just Cause games are right there for the plagiarizing and have been for years. The series’ cycle of resplendent, emergent chaos feeding into campaign progress, which then gives the players new areas to destroy and new tools with which to destroy them, is a simple yet elegant solution to the disconnect players often feel between story and chaotic open-world gameplay.

Just Cause 2’s extremely lean presentation of that cycle is what brought me to the dance, I suspect that’s the case for many others. I skipped the third game after the less-than-thrilling critical reception, aside from a brief detour at a pal’s house and the assurance that the game would run like trash on my PS4, but my fear that the series would continue to iterate on a winning formula rather than experiment with the talent they clearly have seems to have been realized after a few hours with a non-retail build of Just Cause 4. There are worse fears to have realized, since Just Cause 4 is still pretty fun on its own merits, but it’s nowhere near the breath of fresh air I was hoping for.

I haven’t played a Just Cause game in years, since my ill-fated attempt to 100 per cent the second game, but it all came flooding back after a few minutes of adjustment. Zipline to far-away point, parachute before impact, detach the chute, zipline again while Rico hangs suspended in the air for a few seconds, all like some kind of ground-parallel Spider-Man. Just Cause 4 is responsive and snappy, every time I died it was completely my fault. The verticality the grappling hook provides makes Just Cause combat more about space management than scoring gnarly headshots. It was an engaging way to fight in an open-world in 2010 and it’s just as engaging now. No specific enemy type elicited a groan from me in anticipation of a protracted series of mandatory button presses; rather, any challenge in the game stems from the volume of enemies and how you choose to dispatch them.

You’ll be doing a lot of fighting in Just Cause 4’s new open world—an island that looks like a cross between PUBG’s original map and Mata Nui, the island from BIONICLE—because your job as the world’s busiest guerrilla soldier remains mostly intact. Protagonist Rico Rodriguez’s propensity for explosions makes him the ideal candidate to destabilize despots in an apparently civilian-endorsed campaign of over the top violence. The chaos you cause feeds into progression the same way it did in the previous games, but this time it’s literalized in the form of an “Army of Chaos,” a revolutionary forced emboldened by Rico’s actions that can break enemy control over an area, and (surprise) unlock more activities.

That’s a smart way of re-contextualizing the Just Cause loop, and there are plenty of extremely fun gameplay additions, like grappling hook tech that can give Rico a Fulton balloon, mess with the way the hook retracts after the player connects two objects, or attach a small rocket booster to the end of a length of rope. I used those tools to make a flying car that I attempted to fly directly into a tornado, which was just as much fun as it sounds. The game’s much-touted extreme weather feels more like a way to experiment with physics than anything else, but that only comes from my time in the open world, I’ll be looking to the campaign to see if the scripted missions incorporate the weather in a way that makes sense.

It’s also worth noting that the PC version I played during the preview event was not the version you’ll be seeing on retail discs—it crashed on me only once over the course of about two and a half hours, but apparently, that won’t be the case once the game launches. There was also a fair amount of audio de-synching during cutscenes, but I have to imagine they caught that during testing. What does concern me is the visuals; Rico looks great, but plenty of textures both in-cutscene and out appear fairly muddy and blurred out, even with the textures set to their maximum setting.

Just Cause 4 seems fun, but deep down this still feels like the same game I played all those years ago—which isn’t a bad thing! If you’ve never played a Just Cause game, or even if you can’t remember playing one, I think this game will be a pretty safe bet if you’re in the mood for highly enjoyable sandbox action…so long as you give the series a break afterwards, at least until Avalanche does something new and exciting with the formula.