The Symphony of Destruction in Just Cause 3 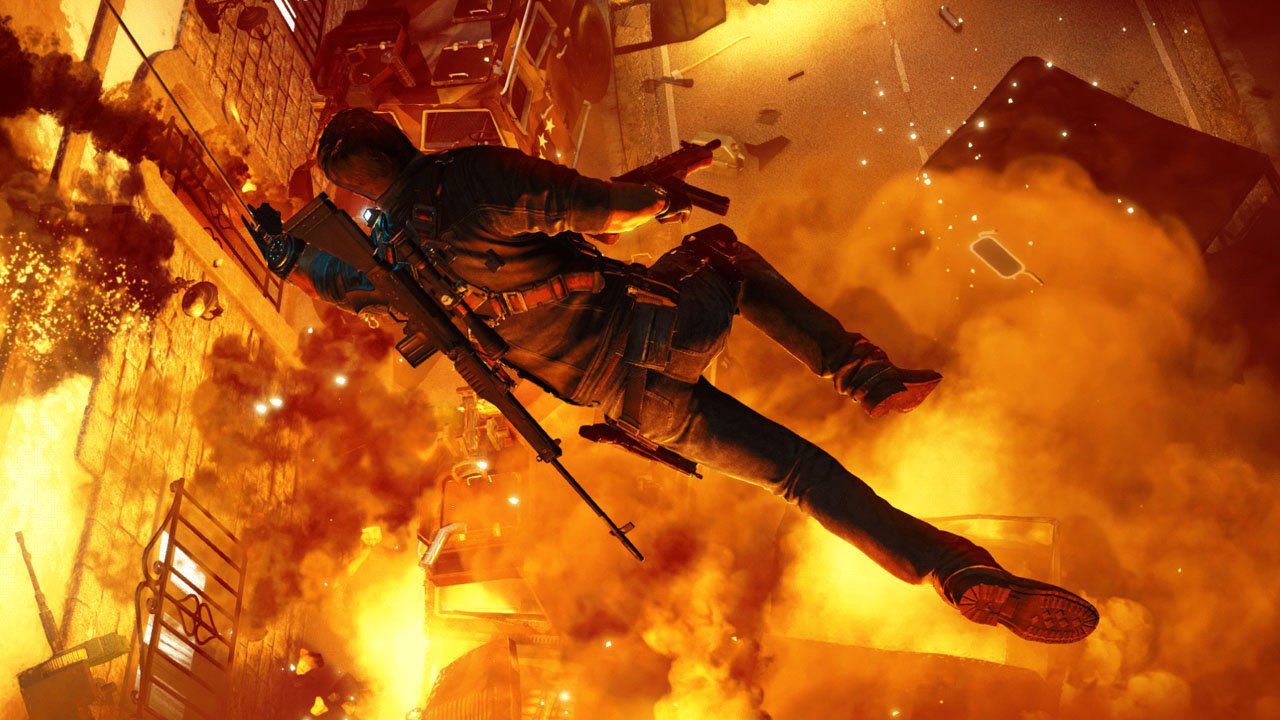 Just Cause is a franchise I have always enjoyed. It takes a concept that many studios would normally take seriously and injects chaotic fun. What could have easily become a generic third-person action game in the hands of other developers instead became something truly special at the hands of Avalanche studios and Square Enix. Now, they’ve deemed it time for more insanity and are soon to unleash the third instalment upon the public. While at E3, I had the pleasure of talking to Omar Shakir, the producer for Just Cause 3. He talked to us about what people can expect when they play the game, as well as how this game will mix up the chaos that the previous instalments have set as a staple of the series.
CGM: First, could you tell us what the team has used to build Just Cause 3, and how this will affect the overall experience for the player?

Omar Shakir:  It’s our own, it’s proprietary, and it’s our technology. So you can see these are big coastal cliff sides, and pretty much everything the player sees, y’know, the military base back there,  those windmills, you can go to at any point. The moment you start the game you can go anywhere.

So the game’s completely open right from the start?

OS:  Right from the start. Well, I guess you’re in a mission right from the beginning, but beyond that. Once you finish that, you’re completely open.

When you say “mission”, you mean a tutorial type of mission?

OS: It’s kind of the open introductory mission. As you can see, the town is somewhat oppressed. This is Alba. You see that military guy on top of that guy? You got a gunner on top of that patrol jeep. You kind of got trash littered, strewn about, people are online for some reason, but let’s start with one of the newest additions to Just Cause 3, which is the new dual tether mechanic.

In the previous Just Causes, when you dual tether two points together, they automatically retracted. We changed that, and we’ve given you more theatres now. So when you tether two points together, you choose when you want them to retract, and you choose how many times you tether them together. Right now we’re playing with three to five theaters by the time we ship the game, but who knows. Anyways, so you’ve got three options here.

Is Just Cause 3 any more or less serious than the previous games?

From what I am seeing, traversal does not seem like an issue with Just Cause 3, would you say this is correct?

OS: I would say that we pretty much perfected traversal at this point. You have the parachute, which is a stable in-air combat platform; it’s now more precise. You can do more precise things from it, and when you need that adrenaline fix, when you need to get quickly from point A to point B, you have the wingsuit and they all work from each other. From parachute to wingsuit, you can go from wing suit to parachute, you can continue.

So you can change them up?

OS: That’s another thing is that the player’s also grappling from wingsuit, similar to the way they can grapple while parachuting.
And this will allow the player to keep the momentum going?

OS: Yes, and if you’re really good, you never really have to touch the ground. It’s awesome. You can see how stable the parachute is now. So the player’s going to land here, and it presents you with another option or whatever.

How long has this game been in development?

OS: I don’t know. I’ve been with the project myself for about three years.

So it’s been a while.

Can you talk a bit more about Vehicles in Just Cause 3?

OS: Yeah, so obviously we have an air vehicle like in Just Cause 2. In our game, vehicles can be vehicles where you can traverse very quickly from one point to another, or they can be expensive bullets that the player can fire at, say a military base. Rico just ejected and took out one entire side of the refinery with one jet. We’ve redone all of our vehicle models: ground, air, water. They have all been redesigned, re tuned, recreated from the ground up. It’s funny because we have some of the core crew and criteria in the Burnout series. We did our vehicle handling model so you can see that now there’s a little bit more weight and gravity, you can drift, it’s a little more physicalized, but it still has that arcadiness that you need in a Just Cause game. We also added upgrades to the vehicles. So you can see he’s using nitrous, and then if you remember the Nightrider TV show,  you’ve got the turbo jump. So all of these are like an extension of the player’s freedom. Even this vegetation is completely interactive; he’s flattening it as he drives through it, and all vegetation is destructible.

Anything you destroy will stay that way as you work your way through the game?

OS: Yes. It stays there; it’s persistent. So people could, I don’t know, do crop circles in a sunflower field ‘cause they felt like it.

How much of the original Just Cause team is working on this instalment?

OS: We have a lot of the core team. I’d say we have about 10% of the team is the original JC team. But these were the guys that handled the original mechanics. And then we have some great devs with tons of experience from other games.

So would you say this is a Just Cause dream team?

OS: I would say it’s Roland Lesterlin and Christopher Suffern’s dream team. I mean, the guys that work on weapons worked on weapons for some of the biggest games out there. Vehicle tuning was the Burnout guys, so you’re getting a lot of different teams.

Where is Just Cause 3 being developed out of?

OS: The New York Office. We’re staying here now.
What are some other things that have been refined since Just Cause 3?

OS: I don’t know if you remember, but the community liked dropping their gear at a moment’s notice. We had that kind of loading screen in JC2 that kind of stunted that. Now, Rico can instantly drop inventory that he’s collected at any point in the game. All he has to do is throw a beacon and it gets dropped in front of him. You get a vehicle, get weapons, and whatever you want, and these come with the upgrades. All of them come with the upgrades once you unlock them. Another new addition here you’re about to see is when he starts, he’s no longer on a fixed anchor point like JC2, he can actually move around freely using all the same basic locomotion that you have while you’re on the ground. Also, he can do backflips.

We obviously installed bikes in the game, and you can fire one-handed weapons from a bike, but you can also fire large two handed weapons like in RPG.

All these vehicles use Havoc destruction, so you can see all the parts fall apart dynamically; it’s all procedural destruction. All that stuff is physicalized, so if you want to grab it or use a dual tether to use as weapons, you could.

Would you say this is a darker chapter for the characters?

OS: No, I mean, there’s definitely still that light-heartedness that Just Cause is known for, but I also think that our game director Roland Lesterlin, he’s a big movie fan, and one of his favourite movies is Indiana Jones. So that’s the comparison I would make, is that it has the action and adventure as Indiana Jones, and every once in a while you get a moment that sort of feels totally serious and emotional, but it never overwhelms the arc of the game.
CGM: Are the voice actors the same as the previous games?

OS: No, we have a new Rico, and we have, well, there are some returning, but for the most part, this is a new crew and a new cast.

Could you talk a bit more about using the destructible nature of the world?

OS: One of our major pillars is cascading destruction. If I topple a fuel tank, if there’s something destructible, it will all chain together in one big, long, glorious spectacle.

Now, in previous Just Cause games it was possible to never really die, and to keep going through this nonsensical reign of destruction. Is that the same here where you are a very powerful character, or is there some consequence if you go too far out?

OS: So, I would love if Francesco were here because he could defer, but I could tell you what I know he believes. We need to provide the player with a challenge, and you’re looking at a particularly vertical base. Now, the players that come in here and try to play this on the ground, it’s not going to work. They’re going to get fired at by flak cannons and ground forces, but once you’ve learned how to stay up in the air, stay vertical, use the wingsuit, yeah, the challenge is more rewarding because of these things. As the player progresses through the narrative, through the mission structure, and across different difficulties and places and towns, he will encounter an AI that has learned to deal with Rico in a parachute as the game progresses.