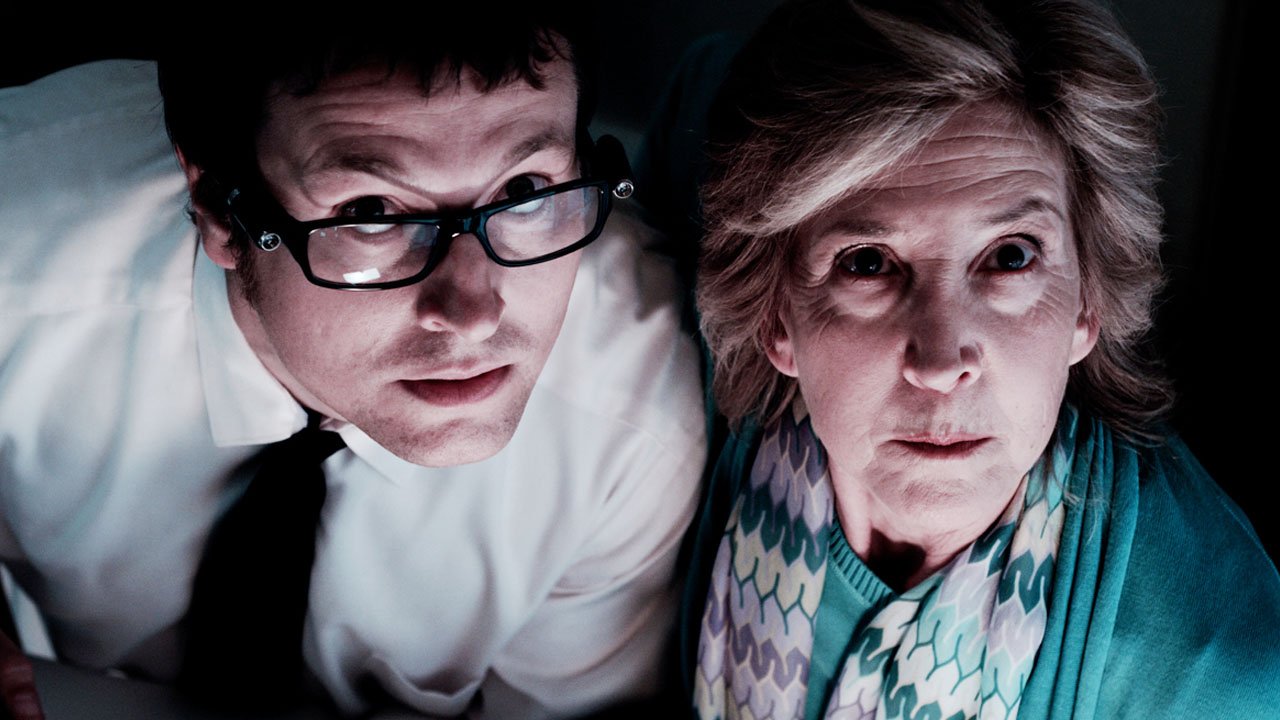 Voices From Beyond: An Interview with Leigh Whannell and Lin Shaye

Five years ago, the Saw writer/director team of Leigh Whannell and James Wan managed to make lightning strike twice with Insidious. After helping launch the torture porn era with Jigsaw and his Rube Goldberg dismemberment devices, the duo decided to slip back into something a bit more traditional with a classical haunted house picture. It worked too, kicking off another trend, a sequel, and now a threequel in Insidious: Chapter 3. With James Wan off applying his camera pyrotechnics to the Fast & Furious franchise, Leigh Whannell stepped into the director chair himself for this round and rather than coast on another sequel, he decided to go for a prequel.

Part of the reason was the inherent absurdity of forcing the same family to endure a trilogy of hauntings and part of it was the desire to hinge the new film around a departed character: psychic Elise Rainer played by Lin Shaye (who you might also recognize as the most disgusting characters from the Farrelly Brothers’ comedies like Kingpin and There’s Something About Mary). As a result those franchise tweaks, Whannell found just enough gas left in the Insidious tank for one more romp. With Insidious: Chapter 3 opening this weekend, CGM got a chance to chat with long-time writer/first time director Whannell as well as his unlikely lead Lin Shaye about everything from their shared love of the horror genre (Shaye is in the original Nightmare On Elm Street after all) to the awkward experience of Whannell having Shaye boss around his character on screen while he was trying to direct her off camera.

Comics Gaming Magazine: Was there any apprehension from either of you to dive into another Insidious sequel?

Leigh Whannell: For me there was some nervousness about directing. I was worried about the film living up to the first two movies. Stepping into James [Wan]’s shoes was a nerve-wracking thing because I think he’s a real master of modern horror. He learned on his feet to become a great horror director. Plus, I was essentially stepping into his shoes right after he’d peaked with The Conjuring and Insidious 2, which wasn’t easy. I tried to block that out just by focusing on making the film super scary and everyone seems to be happy with it. When you’re in the middle of the film, it’s hard to see the forest from the trees, but a lot of people have told me it works, so I’ll trust them. [Laughs]

Lin Shaye: I was frightened as the character and as Lin. For me it was a big responsibility to fulfill the beginnings of this story. Leigh and James told me at one point that if the series went forward, they wanted to make me the face of the franchise, which was staggering. I’m an unlikely heroine at this point of my life. You don’t normally see someone like me as the lead of a film. But it happened and I was little bit scared of the responsibility. Working with Leigh this time was exciting, but also a little nerve-wracking because I knew he was nervous [Laughs]. But after the first couple days it was easy and we became wonderful collaborators.

CGM: How did you end up with this being a prequel and were there any other ideas you tossed around for part 3 before landing on that?

LW: You mean what was in the outbox? [Laughs] I really only ever wanted to make a prequel. The first decision I made was not to focus on the Lambert family from the first two films. I think they’ve taken enough of a beating and it would have been kind of ridiculous to say, “They’re being haunted again.” At this point, they’re experts in hauntings. They wouldn’t even be scared anymore. An ashtray would fly against the wall and they’d say, “Oh that old poltergeist. We call him Fred.” So, I decided to start on a new family and if I was doing that the question was, ‘what connects it to the other films?’ Is it the red faced demon? I decided the focus should be Lin’s character. If she’s a practicing medium, then obviously she’s worked on other cases. Unfortunately, we killed her off in the first movie, so if we wanted to find out more of her life we’d have to go back in time. All of that was probably decided in the course of one day. After that, it all fell into place.

CGM: Did it ever get a bit weird on set when you would tell Lin what to do as a director and then she would start bossing you around as your character Specs on camera?

LW: It was a strange feeling to be acting in a scene that I was directing because my whole body changes when I play Specs. As a director, you’re supposed to be stomping around as a strong figure of leadership and then as soon as I put the glasses on that all goes away. I tend to curl up and shrink.

LS: There were times when I didn’t even recognize him at first. He’d be slumping around moping and I’d think, “Oh my God, that’s my director!”

LW: [Sarcastically] Yes, I was truly transformed like Dustin Hoffman. Perhaps the next one will be Insidious 4: The Rise Of Specs. That’s when I’ll really come into my own. It’s about time.

CGM: What’s the attraction to horror for both of you?

LW: For me, it’s a genre that’s very fun to watch an audience experience. If you’ve been involved in a horror film as a writer or director, there’s no better feeling than sitting in the back of a theater and watching the audience. I even like to hide at the front to watch their faces. The reactions can be so visceral and it’s fun to know you’re responsible. My favorite part is when people are curling up anticipating the scares. It’s incredible. I guess if you reduce it down to its crudest level, there’s a feeling of power that I enjoy. And to be honest, it’s also a genre that people actually go to see. We’re in a weird time for movies. Television is in a golden age and videogames are exploding. So, going out to the theater and watching a film is almost becoming an archaic concept. It’s a strange time to be a filmmaker, but horror is one of the few genres that keeps dragging audiences out of their house to the theater. If you’re making a drama these days without a movie star, you’re pretty much looking at VOD. I think crying at a movie feels like a private experience, but laughing or screaming is a communal experience that the theater can really amplify. That works better in a crowd. We actually had to take that into account when editing the film. You have to remember that there needs to be a little space for the audience to die down after a big scare.

LS: But you know, if the audience misses it, they’ll come back and see it again. That was an experience I had years ago with There’s Something About Mary. Audiences laughed so hard that they needed to see the movie again to catch all the jokes. Hopefully that will happen here with all of the screams.