Microsoft has announced what games will be available for free for Xbox Live Gold subscribers during the month of September through the Games with Gold program.

Starting on September 1st, Xbox One players will be able to download Earthlock: Festival of Magic throughout the entirety of the month. On September 16th, Xbox One owners will also be able to download Assassin’s Creed Chronicles: China, the first of Ubisoft’s Assassin’s Creed Chronicles spin-off trilogy.
China launched in 2015, and was followed by India and Russia earlier this year.

Conversely, those playing on Xbox 360 will getting two games that are getting new iterations this year, starting with Forza Horizon from September 1st until the 15th, followed by the original Mirror’s Edge from the 16th to the end of the month. This will offer those interested a gateway into both game’s sequels coming this year, with Forza Horizon 3 coming to PC and Xbox One on September 27th, and Mirror’s Edge: Catalyst available now on PC, PlayStation 4, and Xbox One.

As with all Xbox 360 games offered through Games with Gold, both Mirror’s Edge and Forza Horizon will be playable on Xbox One through the console’s backwards compatibility emulation. 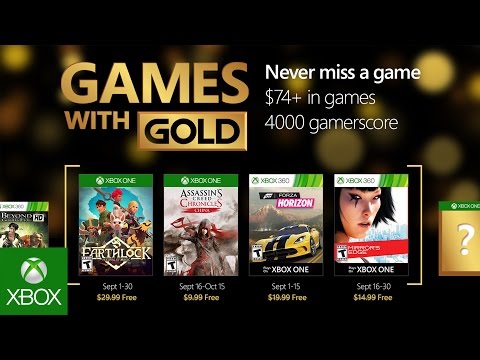 As these games become free, August’s offerings will revert to paid status. This currently includes Warriors Orochi 3 Ultimate and Beyond Good & Evil HD, with WWE 2K16 scheduled to remain free until September 15th.

Microsoft introduced the Games with Gold service during its E3 press conference in 2013 just before the Xbox One’s November launch, but the service was initially on for Xbox 360 before it extended to Xbox One a year later. The service was meant to act as an equivalent service to Sony’s PlayStation Plus, which had been offering subscribers free games monthly since 2010 at that point.