Here are your Xbox Games with Gold Titles for August 2018

With July 2018 coming to a close, Microsoft has unveiled what Xbox fans can expect for their Games with Gold Collection for August 2018.

Starting things off with Ubisoft’s For Honor, the title will be available for download starting August 1st up and will be available until September 15th. Those unfamiliar with the title, For Honor lets players step into the shoes of some of the world’s greatest warriors in exciting PVP and objective-based game modes. 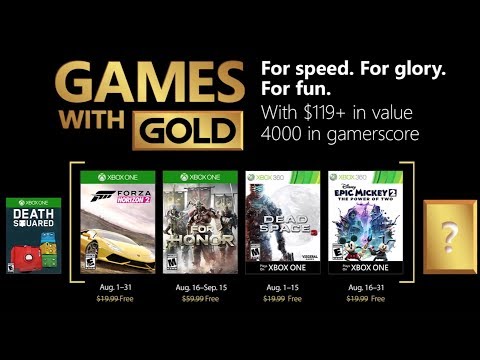 Next up, Xbox players can download Forza Horizon 2, which will be available for the entirety of August. Developed by the recently Microsoft purchased, Playground Games, Forza Horizon 2 will let players race around the breathtaking European countryside of France and Italy, in an expansive and open world.

Horror fans can sink their teeth into Dead Space 3 when it becomes available for download for both Xbox One and Xbox 360 on the 1st of August till the 15th of September. Dead Space 3 introduces a co-op mode to the beloved sci-fi survivor horror series, making it a perfect game to play with a friend, especially for those don’t want to brave it alone.

Finally, Disney’s Epic Mickey 2: The Power of Two will be available for download, starting on the 16th of August until the end of the month. The title is originally an Xbox 360 games but thanks to backwards compatibility can be enjoyed by Xbox One owners, as well. The game borrows elements from Disney’s rich history, featuring not only Mickey Mouse but lesser known characters such as Oswald the Lucky Rabbit, in an adventure spanning different Disney properties.