Dead Rising is a series that defined last console generation. Cashing in on the zombie craze that plagued most of the mid to late 2000s into the 2010’s, Capcom’s zombie franchise became known for it’s over the top action, and zany characters. Now players can relive those memories like it’s 2006 all over again,  on Sept 13, 2016.

The remastered games include Dead Rising, Dead Rising 2, and Dead Rising 2: Off the Record for PC, PS4 and Xbox One. These are updated versions not just re-releases, meaning players can go back and play those classic titles in 1080p at 60 fps with all the DLC that came with each title. 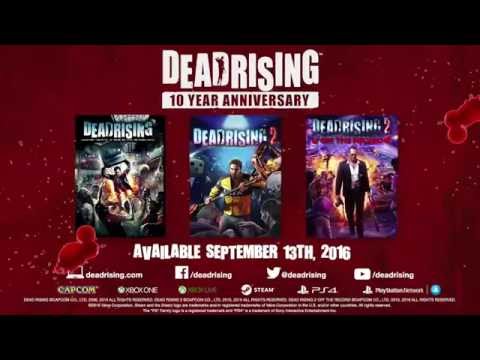 Dead Rising first launched in 2006 on the Xbox 360, but was later ported to PS3, PC, and even Wii. Players take control of Frank West, a photojournalist who covered wars you know. He finds himself in a mall at the onset of a zombie out break. He must try to survive by picking up insane weapons, and dressing up in outlandish outfits. While doing all that, he must try to save the civilians trapped inside and take some photos as well.

Dead Rising 2 took a similar premise and changed the location and character. Instead of Frank West, there’s professional motorcyclist Chuck Greene and instead of a mall, he’s trapped in a casino as he’s in a race against time to find an antidote to save his infected daughter. Dead Rising 2: Off the Record reimagines that same area but brings back series favourite Frank West for reasons.

Obviously, this will build some hype for the much anticipated but poorly shown Dead Rising 4, which launches Dec 6, 2016 for PS4, PC and Xbox One. This game brings players back to the original setting for the series as Frank West as he investigates an all new outbreak.