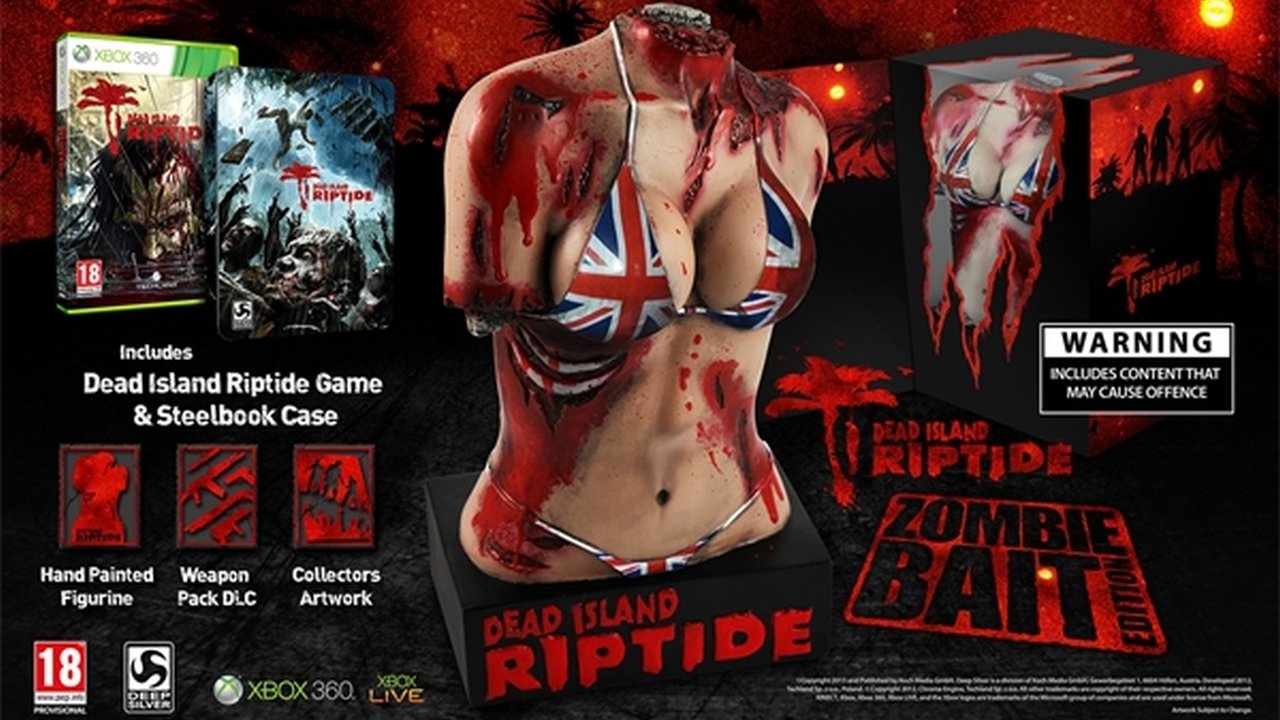 Deep Silver has sent out an apology tweet to Dead Island fans for the 31cm tall sculpture of a butchered female torso set to be put into the UK special edition of Dead Island Riptide Zombie Bait Edition set to be released on April. 26.

Many have let Deep Silver know exactly how they feel about the mauled busty torso most comments and tweets having the words ‘despicable’, ‘disgusting’, ‘horrible’ or ‘ridiculous’. The torso was set to be included in the Zombie Bait edition along with a steelbook case, collector’s artwork, and additional DLC. Since the outrage Deep Silver has since posted this apology:

We deeply apologise for any offense caused by the Dead Island Riptide ‘Zombie Bait Edition’, the collector’s edition announced for Europe and Australia. Like many gaming companies, Deep Silver has many offices in different countries, which is why sometimes different versions of Collector’s Editions come into being for North America, Europe, Australia, and Asia.

For the limited run of the Zombie Bait Edition for Europe and Australia, a decision was made to include a gruesome statue of a zombie torso, which was cut up like many of our fans had done to the undead enemies in the original Dead Island.

We sincerely regret this choice. We are collecting feedback continuously from the Dead Island community, as well as the international gaming community at large, for ongoing internal meetings with Deep Silver’s entire international team today. For now, we want to reiterate to the community, fans and industry how deeply sorry we are, and that we are committed to making sure this will never happen again.

Twitter has been ablaze since yesterday over the mutilated torso with tweets of outrage from all over the world appalled at Deep Silver’s choice to include the torso. So far Deep Silver hasn’t responded as to whether they remove the gruesome torso from the Zombie Bait edition, but it’s been made clear by a lot of fans that they will not be displaying it on the mantle if it is.

Contents for the Dead Island Ripetide Rigor Mortis Edition for Canada and the U.S. was released on Jan. 10, featuring a zombie hula girl bobble figure in place of the Zombie Bait bloody torso. The Rigor Mortis edition of the game will be released April. 23 for $79.99 and will include a zombie arm bottle opener magnet, bungalow key, copy of the game, extra DLC, strategy map, and a Dead Island replica suitcase.