Perhaps one of the most highly anticipated games of the year is Bethesda‘s and Arkane Studios’ Dishonored 2, the sequel to the much beloved 2012 classic.

Ahead of its November release Bethesda have been releasing trailers for the first-person stealth action-adventure title, and the newest one focuses on one of the playable characters: Corvo Attano.

The master assassin, who was the protagonist in the first Dishonored after he was framed for the murder of the empress and the abduction of her daughter, Emily Kaldwin, is now Emily’s must trusted guide after he restored her to her rightful crown.

Dishonored 2 is set fifteen years after the original, and during that time Dunwall City had be on the up, now though,  after Emily’s crown has been usurped her and Corvo are on the run once again.

You can watch the game play trailer, which shows of Corvo’s abilities, below. 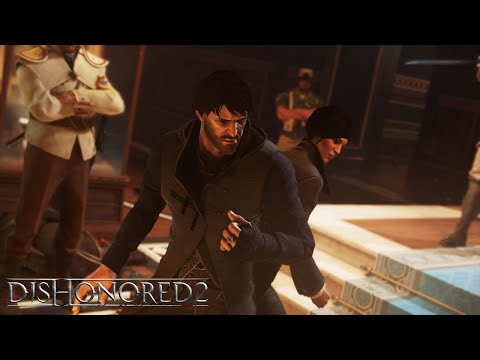 The trailer begins with a reminiscent tone as Corvo pulls on his iconic mask for “just one more time.” We then see some stunning images of Dishonored 2′s new world, the sunny but decaying coasts of Karnaca.

Then the music begins to get menacing as creepy voice overs begin discussing such things as “killers” and that no one is innocent. All the while we get a show case of Corvo’s brutal ability to kill, including literally making one poor guy vaporize into a cloud of blood.

Also showed off in the trailer is the otherworldly aspect of Dishonored 2, as weird creatures and possessed humans alike look as if they could cause Corvo a real problem other the course of the game.

Dishonored 2‘s main villain seems to be a woman nailed Delilah, originally met as Delilah Copperspoon in Dishonored‘s DLC packs The Knife of Dunwall and The Brigmore Witches. Now, however, she is going under the name Delilah Kaldwin.

It all looks very interesting indeed, and Dishonored 2 will be released on PlayStation 4, Xbox One and PC on November 11th, 2016.