Ironcast is a turn-based strategy game, set in an alternative Victorian era; in a world where aristocratic men and women take command of large gigantic mechanized war machines while engaging in combat with the opposing British Empire.  Players assume the role of the Commander of the Consortium of Merit, which leads one to control their own 7-metre-tall Ironcast, in efforts to defend 18880’s Victorian England from an invading force of enemy Ironcast. 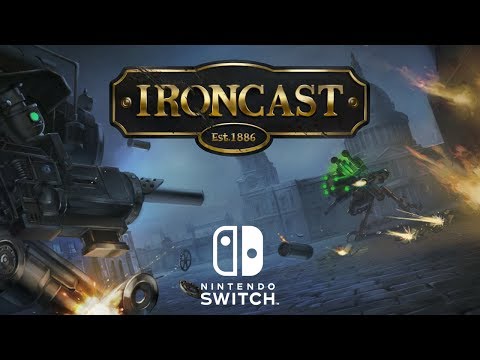 The game features turn-based strategic combat, battles are fought by generating resource nodes which are required to drive and operate the various weapons system available within each Ironcast. Players must choose wisely on how to spend their nodes, either offensively to deal heavy damage and destroy their enemies, or defensively, if they believe the enemy is preparing an onslaught of their own towards the players.

The game also features randomly generated encounters, meaning each playthrough will be unique, additionally, the game is a rogue-like, meaning death is permanent, however with 50 levels to play through, players can rest assured that plenty of rare and worthy loot awaits them for braving the perma-death battlefield.

Taking full advantage of the Nintendo Switch hardware, Ironcast will let gamers play the game on the go in handheld mode, docked on the big screen, in tabletop mode with the Pro Controller or with detached joy-cons, with full HD-Rumble support. Additionally, the game will also fully utilize the Switch’s touch screen capabilities. Gamers wanting to take a first look at the upcoming title can view the game live on Twitch, hosted by Ripstone and Dreadbit.  For more on Ironcast, the game will be on the show floor at E3 2017 in June.