Real-Time Strategy fans rejoice as Kalypso Media, in association with Kite Games, announced Sudden Strike is back with the fourth entry in the series.

Titled Sudden Strike IV, it’s set for a second quarter release in 2017 for PS4, Mac, Windows PC, and Linux. Players can fight their way through 20 missions across three campaigns set in the Second World War taking control of British, American, German or Soviet troops commanding over 100 units into battle. For history buffs, there are some historic units available to control like the Heinkel He111, a bomber from Germany, the T-34 tank from Russia, and the British fighter Hawker Typhoon. Also, as a series first, players have the opportunity to choose between nine historic commanders including George Patton or Bernard Montgomery.

“The team at Kite Games consists of many talented individuals with an outstanding pedigree with World War II RTS titles, and the commitment and passion they are pouring into Sudden Strike 4 confirms that Kite Games is the perfect partner to bring this revered series back to the forefront of the RTS community,” says Simon Hellwig, Global Director of Kalypso Media in a press release. 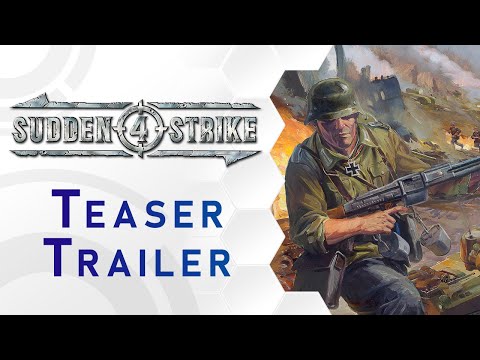 Other features include a competitive multiplayer mode where aspiring commanders can face off, along with mod support through Steam Workshop exclusively to the PC version. A new reward system rewards aspiring commanders with points and bonus content like actual historical footage. How players earn that is up to them as missions are very open-ended. Whether players prefer to take a more tactical approach, occupying buildings with infantry, or going for an all out air strike, this entry in the series seems to have options for different play styles.

Sudden Strike has a pretty rich history in the videogame industry. Its first title released back in 2000 and is credited as one of the pioneers of the real-time tactics genre. The last game in the series, Sudden Strike: Last Stand, released in 2010, so fans of the franchise have waited a long time for this.