Nights Of The Azure 2: Bride Of The New Moon Announced by Koei Tecmo

The new game will release in the west on Oct. 24, 2017, on PlayStation 4 and Steam, and as a series first,  the Nintendo Switch.  Fans living in Europe will wait a few days longer as the title releases on Oct. 27, 2017 in that region. Nights of Azure 2: Bride of the New Moon launches several months earlier in Japan where the title has a release date set for Aug. 31, 2017. Additionally, Japan will receive a PlayStation Vita version of the game.

Nights of Azure 2: Bride of the New Moon is set in a fictional, demon-ridden European city, near the end of the 19th century. The narrative focuses on a knight protector named Alushe, along with her two childhood friends Liliana, a kind-hearted priestess, and Ruhenheid, a holy knight of the Lourdes Order. Alushe is ambushed and killed, only to wake up an artificial half- demon, at the hands of a dark religious origination known as the New Curia. 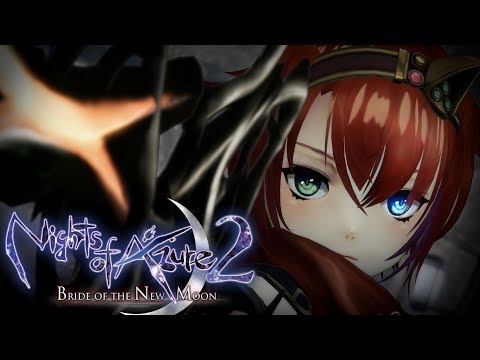 Like the original game which released in 2015, the sequel focuses on delivering a strong narrative with even stronger female leads in a style reminiscent of popular Japanese anime. The game features fast and frenetic gameplay that Koei Tecmo is known for in games such as the Dynasty Warriors franchise and Ninja Gaiden.

Like the previous title in the series, Nights of Azure 2: Bride of the New Moon features a fully realized and fleshed out RPG system. This lets players develop the characters the way they want while allowing them to focus on key upgrades that change the style of combat and unlock special skills and arts that can be used to vanquish the assortment of foes the game throws at the player.