Rebellion has revealed a new trailer for Rogue Trooper Redux, a remaster of the critically acclaimed third person shooter from 2006. 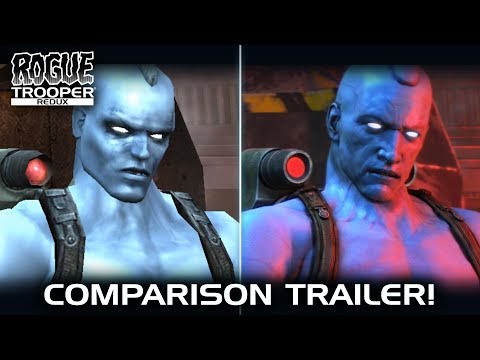 For the uninitiated, Rogue Trooper Redux is a title based on a comic book, the game features writing by the famed writer Gordon Rennie. The 2006 original was very well received by both gamers and the press, to the point that the title received a BAFTA Award (British Academy of Film and Television Arts) for its writing and the character Rogue.

The story of the game takes place on the planet Nu-Earth, which is caught in the gravitational pull of two suns and a black hole, during a war in which millions of lives have been lost. The war saw the use of all manners of biological weaponry and terrorism, which resulted in the entire planet succumbing to poison and ruin.

A special group of genetically engineered super soldiers were created and deployed in the hopes of surviving the harsh climate of the planet. A soldier by the name of Rogue goes AWOL in order to find the whereabouts of a traitor General who is responsible for betraying his unit of super soldiers and defecting to the Norts, the main enemy within the game.

The new trailer for the upcoming Rogue Trooper Remaster promises that the third person action shooter will be available come October 17 2017. Those who can’t wait to try the remastered title will be able to try the game at the upcoming San Diego Comic Con.

Rogue Trooper Redux will be available on PC, PlayStation 4, Xbox One and the Nintendo Switch.