Hi-Rez’s SMITE has become a major name since its launch. In a MOBA space primarily dominated by DotA 2 and League of Legends, the stalwart free-to-play game has earned a devoted following thanks to accessible gameplay and a winning art direction. Now, that following will a new playable character to sink their teeth into – The Morrigan.

The Morrigan is a Celtic war goddess, comprised of three sisters, who presides over a warrior’s fate. According to Hi-Rez (and Norse mythology, of course,) The Morrigan directly controls fate itself, able to accurately foretell death and doom as it pertains to war. Sounds pretty game-breaking, if you ask me.

Luckily, The Morrigan’s actual in-game abilities look to be anything but. She primarily seems to be a stealth-based DPS character, with an emphasis on trickery and status ailments. In addition to a three-pronged spear attack and a projectile strike, The Morrigan will be able to place curses on opposing teams. These curses will gradually do damage over time, which gives the character a bit of a support angle to her as well.

Perhaps the most notable ability is her transformations. At the beginning of matches, players are encouraged to look at what gods are on the map and start planning around that. When releasing The Morrigan’s ult, players will get a chance to temporarily change into a character that is in play, and use any of their abilities for the time being. This is a potential game-changer, as a well-timed ult could buff your team, wreck the opposing team, or some combination of the two.

On top of it all, The Morrigan just looks really cool, clearly influenced by classic fantasy art in the vein of Frank Frazetta. 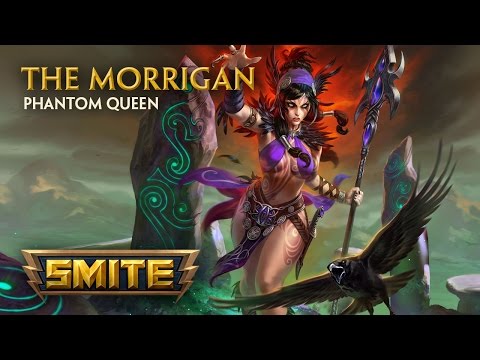 The Morrigan will roll into SMITE in the 3.25 update, or The Phantom Queen Patch. It’ll hit the game later this year, and honestly, looks interesting enough for me give the game a go.