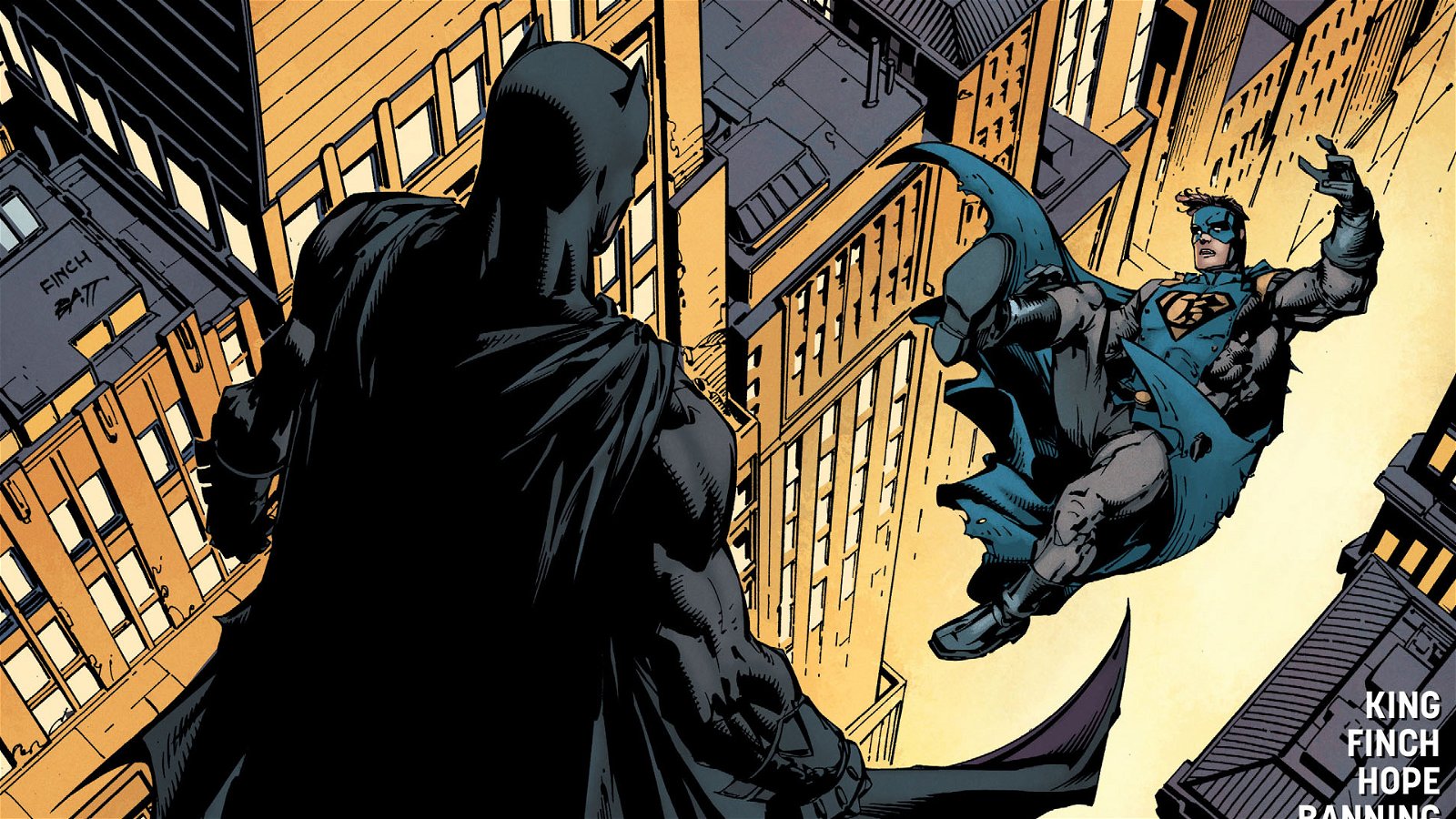 With DC Comics’ Rebirth initiative, their longstanding Batman title has restarted once more at #1. Their first story arc, titled I Am Gotham, takes place over the first five issues, with a sixth issue bookending the series as an epilogue.

I Am Gotham comes hot off the heels of Batman Rebirth #1 (see my review for more details). The story begins high above the streets of Gotham, with a surface-to-air missile slamming into the tail of a passenger airliner. With the plane going down, Batman springs to action. Riding atop the plane, he maneuvers it away from the city, sending it for an inevitable impact in the harbour. The Dark Knight, believing this is his end, gives his final thoughts and goodbyes to Alfred. But just before impact, the plane is lifted. Someone super has saved the day. It’s not the Last Son of Krypton, however. Rather, it’s two new superheroes – Gotham and Gotham Girl, who can not only fly, but have powers similar to Superman. They save Batman and inform him they are here to save the city.

As the story progresses, Batman realizes that Gotham and Gotham Girl can help him. In one instance, he utilizes their skills to save a bridge from collapsing. But there is something not right with Gotham. As Batman investigates deeper, he unravels how the two gained their powers, but not before Gotham goes rogue and ‘you know what’ hits the fan.

An interesting undercurrent throughout the I Am Gotham storyline is that of the Monster Men. While the reader is never shown said Monster Men (not yet anyway), they are hinted at. An old villain has resurfaced, Dr. Hugo Strange, and with him something sinister is heading toward Gotham. Within that underlying storyline lies a connection to Amanda Waller, the head of the Suicide Squad. Her entrance into Batman this early on makes it clear the seeds have been planted for something bigger down the line.

Writer Tom King does a quality job beginning the Caped Crusader in the Rebirth era. King’s Batman feels like vintage Batman – which seems to be the point of DC’s course correction with all its titles. He is his dark, brooding self, willing to do whatever it takes to save his city – even if it could cost him his life. While the story never sags over the six issues, the most interesting parts tend to come from the side storylines as discussed above. Gotham and Gotham Girl are okay, but not terrific forces to oppose Batman. The Rogue’s Gallery we’ve been accustomed to will hopefully be coming down the pipe soon in Batman comics. While the sprinkling of Solomon Grundy and Dr. Hugo Strange were delights in I Am Gotham, they were just that – sprinkles. For this reviewer, it made me wanting more.

One exciting twist King adds to I Am Gotham is when things begin to unravel with Gotham – Batman can’t handle him alone. This leads to an interesting dilemma, as the Caped Crusader must call on extra help to contain the threat. King does a great job with the writing here, as it’s never overdone, but you can definitely feel Batman’s irritation when the cavalry arrives.

Adding to King’s script is artist David Finch. His artwork breathes much life to this Rebirth Batman, giving him that iconic look. Further, Finch’s splash pages are some of the most memorable sequences of the series. Colourist Jordie Bellaire needs a shout out as well. This Batman story is dark, but always coloured light enough so the reader can clearly see everything.

One thing of note. Batman is now being released every two weeks. With DC Comics Rebirth, many of their titles are under this same release pattern. This has greatly benefited the reading experience. Not having to wait a full month for the next issue is a stroke of genius. And with what was said at the end of I Am Gotham and the fate of our favourite Caped Crusader, it leads to less of a wait for cliff-hangers like this one to be resolved.

Batman: I Am Gotham offers a solid start to the Caped Crusader’s new life in DC’s Rebirth.