An Icy Adventure That Melts Too Early
SCORE: 6/10 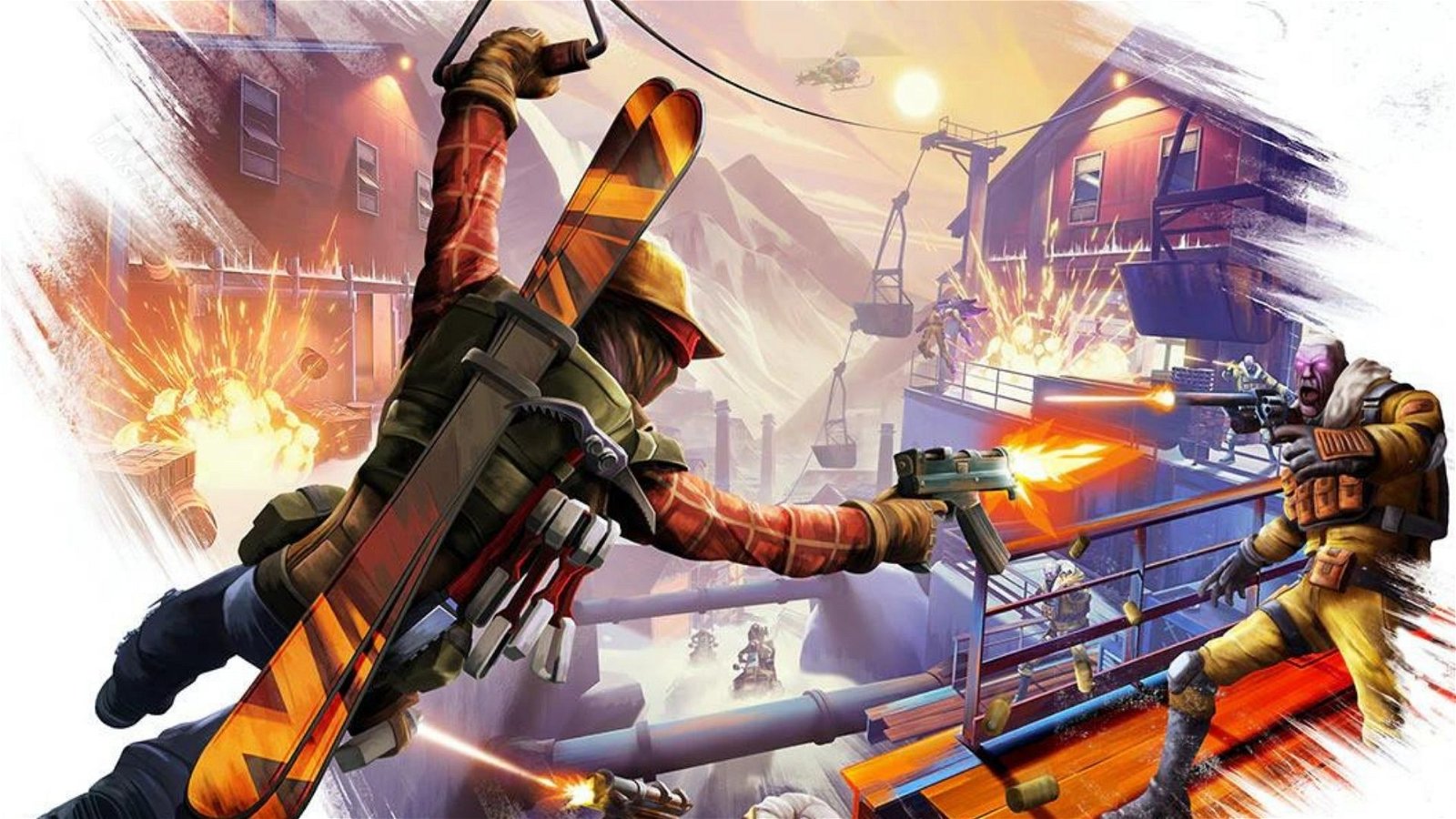 Fracked has the makings of an extreme VR shooter. It’s easy to get lost in shooting bad guys while skiing down the alps. Or wiping out waves of goons as you push an explosive mine cart down a facility. Even ziplining over enemies with a sick spy beat playing in the background. The game has enough of these moments to keep PSVR players excited. That’s until things end abruptly after a criminally short three hours; just enough for me to stop tolerating the experience.

nDreams has had a good track record for genre-defying AAA VR shooters. Phantom: Covert Ops still takes the cake for a unique, full-length stealth game that can only work on VR platforms. The concept of mixing kayaking into a gritty military premise like Metal Gear Solid or Call of Duty worked. nDreams also took their time in creating expansive stealth playgrounds to paddle through.

Better yet, the studio would show off the potential for spy action games.To better suit the PSVR and performance, Fracked also uses a cel-shaded art style. It’s beautifully rendered for an extreme action game like Fracked. Outlines and vibrant colours effectively set the world apart from other nDreams productions. Enemies are also easier to spot for players as they clear out rooms of goons.

Surprisingly, nDreams kept their VR shooting mechanics sharp. Fracked plays well on the studio’s elements to aim and fire. It’s great to see nDreams build on Phantom: Covert Ops to deliver a cinematic thrill ride. But the same magic is traded for a shorter experience that fails to do more with its ideas. Fracked pushes deeper into Phantom’s extreme action (think Vin Diesel’s XXX series). Players are taken out of the dark waters and into a colder scene. It’s filled with corporate espionage that somehow fits in skiing and climbing. Sadly, all of these elements didn’t materialize into a full length romp.

“Fracked started to grow on me with engaging gunplay and handling.”

As a shooter, Fracked started to grow on me with engaging gunplay and handling. There aren’t too many weapons players can keep—instead forcing them to carry a pistol and SMG. But they’re also lethal with accuracy against the game’s goons. It’s strange to say that Fracked’s gameplay feels like a big step back, only because of that PlayStation VR exclusivity.

The PSVR is easily Fracked’s biggest problem. It’s neat that nDreams can deliver their latest experience over Sony’s VR system. But the flaw lies in making outdated controls work. The PSVR was released during a time when VR was still finding solid ground. This meant relying on the PlayStation Move controllers, which lack a number of basic features like joysticks or haptics. The game somehow makes this work, putting players in a fully seated experience. Walking is done with a button. Turning uses X and Square. It’s an incredibly awkward system that makes playing clunky.

Without hand-based controls, it’s even harder to aim and fire. There are no iron sights to aim with, while players have to spray and hope for the best. Worse yet, weapons can only be used with one hand at a time. nDreams scales back plenty of comfort to make gameplay work without a joystick or adequate tracking. On Easy, players are given laser sights. A real godsend without little to no aiming mechanics whatsoever. nDreams has had a habit of accurate gunplay in Phantom and the grocery checkout game Shooty Fruity. But it’s a real shock to see basic VR shooting downgraded this way.

The game still throws plenty of bad guys to make things worthwhile. nDreams doesn’t hold players back as they did in Phantom: Covert Ops. Out of the shadows, it successfully goes all-in with action. The game evokes some GoldenEye as players are gunning down trooper after trooper across facilities. There’s a much better skiing mechanic than Medal of Honor: Above and Beyond in those rare moments. I feel like an action hero across these cinematic moments. But there’s just never enough to connect Fracked’s repetitive gunplay.

Enemies are also lacking in variety. Basic fodder is sometimes backed by explosive chargers. These special ones are fast and combustible. They’re also incredibly annoying, forcing players to break out of cover and awkwardly hobble away. Fracked tries to keep players moving, in a VR system that just isn’t made for that. The issue goes into full overdrive in boss fights. The game sends out the occasional heavy brute who becomes the worst bullet sponge ever. They also plant mines to keep players from sneaking up on their explosive backpacks. But even this task is daunting as waves of goons lay the damage on. Fracked gets lost in this repetition, which can be frustrating when players die over and over again.

“There’s an engaging story at play in Fracked’s universe.”

There’s an engaging story at play in Fracked’s universe. Players become a mysterious, but highly skilled saboteur for mining operations. This gives our hero all the excuses to shoot goons, ski off mountains and dangle on choppers with a submachine gun. In a neat change from Phantom, our hero is also fully voiced. There’s a comforting banter that steers clear of cheesiness. But it is also well-timed when players find the refineries too quiet. Each of Fracked’s levels also have temporary weapons to pick up and use. A revolver, grenade launcher and shotgun feel satisfying to use on groups. But these should have been kept as a permanent part of an arsenal. Like Doom VFR, players should be given their own resourcefulness when Fracked throws in a variety of situations.

This intrigue is met with our extreme eco-terrorist, who infiltrates the refinery for a personal sabotage mission. nDreams draws a fine line for realism and wackiness, but the game stays grounded by delivering some corporate intrigue before the climax mentions “aliens.” Helicopter companion Rosales acts as the sole contact and friend. Sporting a cheery banter, she also takes players across levels with last second entrances. A special mention has to go out to Fracked’s soundtrack, which basks in spy chases and Hollywood riffs. Fitting for the game’s rare, but bombastic avalanche chases.

Fracked doesn’t amount to a big cinematic payoff after hours of gameplay. The eight chapters easily keep players engaged with bouts of climbing and skiing. But there are only a handful of these sections, as transitions to new areas. It’s disappointing to see nDreams market the shooter with braving the elements, when there are barely any of these moments. Still, the game shines when it blends the gunplay with skiing or climbing. Before falling back into a generic blast of bullets. As the latest production after Phantom: Covert Ops, this is a Hollywood action movie in need of cutscenes, human interaction and world building levels.

The game runs at a disappointingly short length. It’s scope feels more like DLC, as players can beat it in two and a half to three hours. Eight chapters are included, which makes it strange for me to see the credits sooner than expected. Fracked’s sprawling refineries could have included side objectives, challenges or more platforming. These are things I’m hoping to see unfold with DLC – something Fracked desperately needs. As of launch, it only offers the three hour or less campaign. No multiplayer, survival or replayable skiing modes. Even at a reduced price, PSVR players deserve much better.

Fracked could have been an evolution for nDreams, clearly looking to do more after Phantom: Covert Ops. The latest game benefits from an occasionally fun action. But it often shies away from its own strengths for skiing and climbing. There’s just enough story to give players an excuse for blowing up fracking refineries. It’s still frustrating to see Fracked rushed, undercooked and held back by the PSVR platform.

Fracked has fun shooting, climbing and skiing mechanics in VR but fails to connect these elements across a disappointingly short game hurt by PSVR exclusivity. 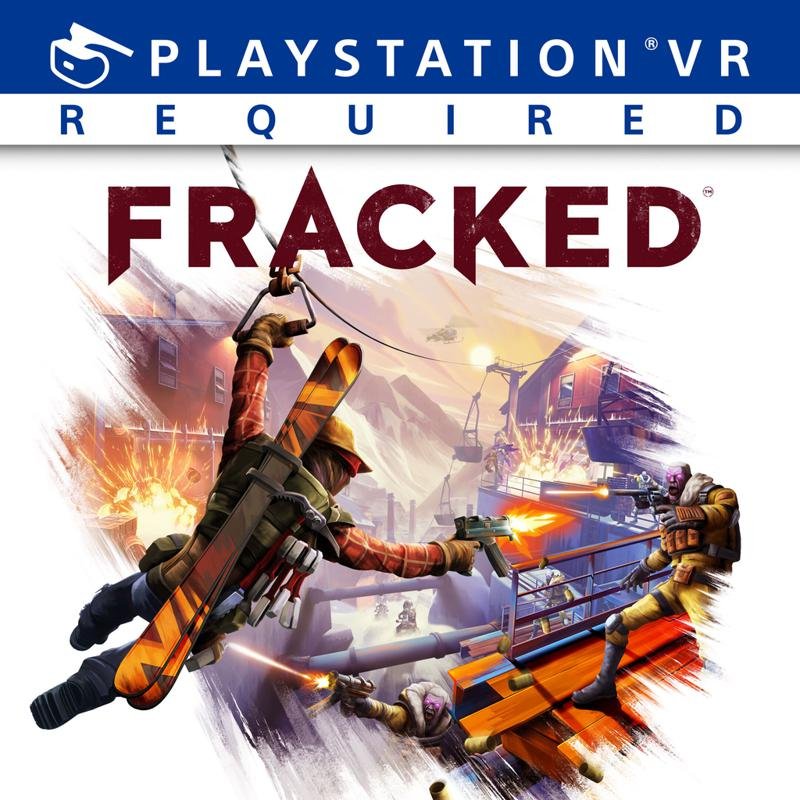