There is technically a plot to this movie, it’s just so convoluted that it’s nearly impossible to explain. Essentially Xander Cage faked his death between xXx movies, and was enjoying a quiet life hanging out in South America doing extreme things and having so much sex you wouldn’t possibly believe it. However, he must get called out of retirement when someone starts dropping satellites on the globe as an act of terrorism, even killing Cage’s old boss Samuel L. Jackson in the process. Cage initially has no interest in working for the government given that he hates ‘the man’ and everything that ‘the man’ represents (hence the tattoos and attitude/tattoos with attitude). However, he eventually agrees because he is a hero, our hero even. He won’t work by the rules that stuffy government agent Toni Colette demands though. Nope, not his style. He’ll only play by his own rules, and he’ll only work with his equally badass and tattooed buddies. So he assembles a team (it must have been so hard for Diesel to avoid describing the team as “family”, but the man knows to leave all of his thoughts on that theme to the Fast & Furious & Family franchise where it belongs) and then blows up a bunch a stuff for the sake of the world. Plus he says one-liners. Lots of them.

Yep, this big stupid blockbuster feels like it was made in 1996 by Jerry Bruckheimer. The only thing missing is Nicolas Cage (who is destined to appear in a Fast N’ Furious movie one day, mark my words). Colours are blindingly bright. The score is techno, because techno is cool not like your stuffy dad’s music with instruments. The action scenes are familiar, but bigger. The dialogue is exclusively comprised of one-liners. Everyone gets a booty shot and everyone gets to kill at least one other person. It takes the brain of an earthworm and the attention span of gnat to appreciate the “content” of xXx: The Return of Xander Cage, and even then most worms and gnats might find it a bit dumb and fast. The good news is that the whole ludicrously expensive and ridiculously stupid affair is a hell of a lot of fun.

This threequel was designed to go well with Mountain Dew. It’s a collection of empty calories and even emptier ideas. However, it’s also absolutely hilarious, especially when it’s not trying to be funny. How self-aware Vin Diesel is as a performer remains a mystery, but there’s no doubt that the guy is currently responsible for the biggest, dumbest, and funniest blockbusters coming out of Hollywood. xXx: The Return Of Xander Cage is essentially Fast & Furious 7.5. It feels exactly like a FF flick, just with more tattoos and all of the speeches about family replaced with speeches about the man. The initial goal of the series may have been to create a James Bond for the energy drink generation, but it’s officially turned into a James Bond for the irony generation. Anyone who sincerely or ironically loves Fast 5 through Furious 7 should get the exact same brand of idiotic glee out of xXx 3: This Time It’s Dumber. Sure the action scenes aren’t quite as good as a FF joint and the dialogue and storytelling is somehow worse, but put this thing in front of any sincere or ironic stupid action movie lover and watch their eyes light up. Idiotic entertainment is rarely this good. Somehow we’ve all been blessed with two Fast And Furious movies in 2017, people. It’s a magical time to be alive. 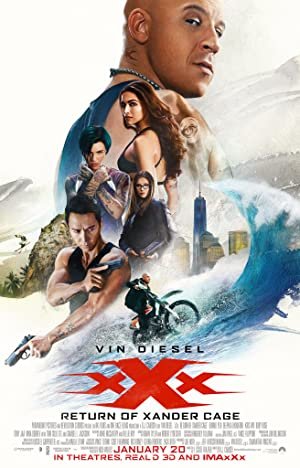