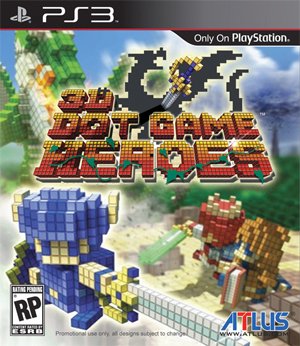 Welcome to Dotnia, a small land rendered completely in 2D and protected by six orbs and six sage Once upon a time, a long time ago, a Dark King called Onyx captured the sages and stole the orb Monsters invaded Dotnia and the land fell into chaos until a young hero arrived to rescue the land with his sacred sword. The hero challenged Onyx and sealed the Dark King inside a Dark Orb. His praises were sung and his legend passed down from generation to generation, making Dotnia a bustling tourist attraction.

Over the years, the hero’s tale faded into myth and the number of Dotnia’s visitors began to dwindle. The land lost its tourist appeal and the king of Dotnia launched an investigation to see how to bring visitors back. The results of his investigation revealed that nobody was interested in 2D anymore. Dotnia’s king decided to bring the land into the new 3D age, and the 2D land was given a dramatic 3D look. Dotnia regained its liveliness once again, only to confront another crisis: The Dark Orb was stolen. Once again, evil creatures began roaming the lands and people began to pray for the emergence of a young hero like the one who had come before.

Released on May 11, 3D Dot Game Heroes introduces you into the midst of Dotnia’s recent chao You are the new, young hero and it is your quest to find and reclaim the six orbs and restore peace to the land.

Flashback to the Past

3D Dot Game Heroes reintroduces a whole host of past gaming conventions while infusing them with a new look and feel. A mix of action, adventure and RPG, 3D Dot Game Heroes presents a throwback to the industry’s golden 8-bit gaming era. It offers a throwback so complete that 3D Dot Game Heroes is basically a modern version of The Legend of Zelda; players must recover artefacts from temples, battle enemies with simple sword and shield combinations, and speak to others through Nintendo-esque text square Players will even acquire a fairy companion early in the game’s course, which will hover comfortingly beside the hero throughout his trial

3D Dot Game Heroes’ connection to the 80s gaming past, and Zelda in particular, is arguably its most defining characteristic. Of course, the game does not rest on imitation alone. Luckily, the game is infused with a few more recent gaming conventions as well.

Flash Forward to the Future

Despite 3D Dot Game Heroes’ intention to resemble the chunky, 8-bit aesthetic, the game stays true to its title descriptor and renders a beautiful world in 3D. The transformation of old to new and the charming back story of why the change has occurred give the game a unique look. In looking to the past, 3D Dot Game Heroes shows just how far the industry has come. The kingdom’s look is beautiful in its 3D rendering—bright, colourful and eye catching—and the small animations give the game an added quirky, surrealistic feel.

The game also incorporates new conventions of gameplay choice, customization, and sharing that was not present in the golden era of gaming. Before beginning their quest, players may choose from a roster of premade 3D heroes or, even better, use the in-game character editor to create their own 3D hero to use and share with friend The game also comes with a variety of mini-games which are imitations of older games in themselve These games are charming, quick, and provide a welcome respite if you’ve had too much questing for one night.

The New and the Nostalgic

3D Dot Game Heroes is a light and attractive game. It is also very easy to play considering its use of pared down controls in comparison to the complex manoeuvres required for many of today’s game

As previously mentioned, however, the game’s structure is consistent with the original, 80s Zelda game. With that being said, if you weren’t a Zelda fan before, you may find it hard to get into this type of game now.

3D Dot Game Heroes is charming in its imitation, but it reintroduces some gaming quirks that should have stayed in the 80 The repeat in-game soundtrack, for example, can drive a player batty. At times barely noticeable, at others maddeningly present, it’s a repeat sound that may have been better left in the past. While the world is beautifully rendered, the transition of characters from 2D to 3D is also highly stylized and extremely pixelated. The effect is understandable in its attempt to render the pixelated look of the past, but with such a beautiful world, the characters could have looked better if they were more streamlined.

People say that imitation is the best form of flattery and 3D Dot Game Heroes embraces that. If you’re planning on buying this game, however, just make sure that you enjoy its object of affection. If you do, this game is a tribute to all from your past that you’ve known and loved. If not, this game may not be the right one for you.

3D Dot Game Heroes introduces you into the midst of Dotnia’s recent chaos. You are the new, young hero and it is your quest to find and reclaim the six orbs and restore peace to the land.
REVIEW SCORE
5
File Under: Heroes, PlayStation, Zelda