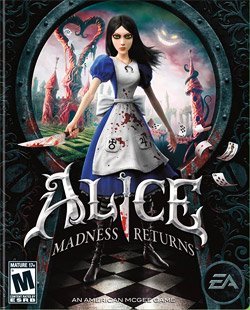 Alice: Madness Returns takes place eleven years after the events of American McGee’s original Alice, and the titular heroine is now out of the asylum and working in an orphanage for similarly wayward youth in London. However, she’s still in therapy and her job is as much a charity as it is a responsibility. Her wards all make snide comments behind her back and most everyone else regards her with the same observational pity that you’d normally reserve for a leper or a dog with three legs.

So yes, Alice is still unmistakably mad, and the main story begins with a relapse once she starts having flashbacks about the fire that claimed her family’s lives. She’s realized that the inferno may not have been an accident and uncovering the truth may be the key that allows her to cling to sanity. It’s a retcon of the original game, but it makes sense in context and – perhaps more importantly – it helps make the sequel more accessible eleven years after the original. This game is about Alice and her madness, so while The Mad Hatter, Mock Turtle, and the Queen of Hearts are all present and accounted for, they’re largely relegated to cameo appearances.

Unfortunately, Alice can’t really afford another bout of insanity and that’s what makes Madness Returns so engaging. Unlike most video game protagonists, Alice is truly vulnerable. Her condition has made her a victim in an unforgiving London and she carries with her a lifetime of abuse that frequently crosses over into outright exploitation. If she doesn’t remember what happened during the fire, she’ll be sectioned, lobotomized, and forgotten, and as a former asylum inmate, an orphan, and a woman, Alice’s independence depends entirely on the continued charity of others.

The game is divided into six massive chapters that each start out in London before heading off to Wonderland and the retreats are escapes for Alice as much as they are for the player. In Wonderland, Alice isn’t necessarily in control – there’s a runaway train threatening to run roughshod over whatever’s left of her sanity – but she does have power, and she can use that power to recover her memories and set things right within her mind.

Turning to the more technical aspects of the review, Alice: Madness Returns is a third-person action-platformer and you’ll appropriately spend the majority of the game jumping from one ledge to another. The controls stick to the well-practiced conventions of the genre, but they’re perfectly serviceable and there’s generally not too much to complain about. Alice can use her dress to glide along air currents and shrink to reach otherwise inaccessible areas.

Alice can also utilize her Shrink Sense to reveal invisible paths and messages throughout all areas of Wonderland, so her diminutive stature becomes one of the primary elements of the gameplay. There are essentially two versions of Wonderland – the seen and the unseen – and there’s a real joy to exploration that gives you the incentive and the opportunity to go sightseeing as you search for hidden memories, health upgrades, and other collectibles.

The rest of the game is spent in combat, which is both surprisingly challenging and surprisingly competent. Your main weapon is the Vorpal Blade (it’s a big kitchen knife), although you’ll eventually pick up a Pepper Grinder, a Hobbyhorse, a Teapot Cannon, and some clockwork bombs that are more useful as literal paperweights during the games many puzzle segments. The Teapot Cannon makes most of the other weapons obsolete, but evading your opponent’s attacks still requires a considerable amount of skill and everything in the inventory has numerous uses outside of combat.

Even so, the battlefield has nonetheless been stripped of many of the more complex features associated with modern gaming. Alice doesn’t have anything in the way of combos, so encounters are often about choosing the right weapon instead of rhythm and timing. The dodge button, meanwhile, has an irritating habit of dodging you straight into the line of fire against the larger baddies that have protracted attacks that are extremely difficult to evade.

There are also some slight issues with the camera (at least during combat). If you’re locked onto an enemy, the camera pans to place you on opposite ends of the screen in a way that makes it tough to track the movements of your selected foe, to say nothing of the dozen other creatures in the room.

Fortunately, none of the problems obscure the core design and there’s a certain uncomplicated elegance that keeps your focus on the things the game does well. The visuals are absolutely fantastic – there’s no need for photorealism when the concept art is this good – and it’s all backed up with immersive levels, colorful monsters, and a compelling story. I played Madness Returns for nearly twenty consecutive hours (minus breaks for food and sleep), and it’s so well paced that it’s easy to overlook the many minor imperfections.

So while Alice: Madness Returns doesn’t do anything wrong, it is the sort of game that suffers slightly as a result of limited resources. The game simply doesn’t have the shimmering polish of more expensive AAA titles and the controls aren’t quite as tight as you might hope. Similarly, the gameplay and the story are occasionally isolated from one another and the excursions in Wonderland go on so long that you might forget about the over world structure that’s ostensibly holding everything together. American McGee’s Victorian London is just as interesting as anything in Wonderland, so it would have been nice to get some more time to explore the run-down streets of the city.

Again, however, these are insignificant quibbles that shouldn’t negatively color your impressions of the game. Madness Returns is above all else a serviceable platformer with enough regular game stuff to keep action fans occupied. The puzzles aren’t particularly strenuous, but the game never repeats itself and you’re not going to get bored while playing through the levels.

My critiques consequently aren’t complaints as much as they’re musings on the things that might have been. Alice is so well realized as a character that you’ll wish the game would probe even deeper as it does during the London moments where Alice shows flashes of her Wonderland strength. You’re always keenly aware that Alice is at once a pauper in London and a princess in Wonderland, and while it’s that dichotomy that makes her such a tragic and compelling figure, it feels like there’s the potential for a more completely realized experience.

Yet the fact that Alice is genuinely thought provoking is ultimately high praise in and of itself. Alice: Madness Returns is the rare game that demands actual criticism because it actually has something to say, and that alone makes it well worth a few hours of your time.

You’re always keenly aware that Alice is at once a pauper in London and a princess in Wonderland, and while it’s that dichotomy that makes her such a tragic and compelling figure, it feels like there’s the potential for a more completely realized experience.
REVIEW SCORE
8
File Under: American McGee, PC, PlayStation