“Houston we have a problem.”

Alien Swarm was first seen as a UT2004 mod, which has had a long and distinguished history of modifications, and great community. Valve took keen interest in this mod, and moved to hire the original dev team to work on the Left 4 Dead series. Let’s face it, Valve has a good eye for talent. Essentially, with this rendition, the team ported the original mod, into the Source Engine, and released it for. Hold your breath now. Free. As a result, we get an amazing co-op experience, with plenty of alien splattering fun.

This gem does everything (for the most part) right. The story itself is your typical space survival deal. Humans struggling to survive using conventional means against, you guessed it, aliens. Now yes, I know. The humans being mauled by alien creatures that happen to be coloured green thing, has been done a million times. Good thing the story itself isn’t all that important. The game itself is played using slightly slanted top-down view, which is great for this style of game, mainly due to you being able to see the carnage in its surreal beauty. Also, for those who prefer to get down and dirty, there are a few console commands that can be entered to turn the view into a first person fillet-fest.

“Say hello to my little friend!”

There are several classes for you to play as, each with its own characteristics. However, as a note, you will always need someone to play as the Tech class, as he provides the only tools necessary to progress through levels. The Officer class is your stereotypical buff machine, who gives out bonus to nearby teammates. This class gains access to a class specific shotgun called the Vindicator (and yea, it holds its name well), which just so happens to come standard with an incendiary grenade launcher. The Special Weapons class is the firepower of your team. When I say firepower, I mean firepower that would make Tony Montana blush. At higher levels, this class gains access to a minigun which is fairly efficient at spewing death. The Medic, like in any other game, is the unsung hero. As the name implies, this class heals people, which can be done overtime using healing beacons, or a medic gun (must…resist…Killing Floor…reference). And finally, the Tech, the annoyingly necessary classes in the game. This is one of the few dings against this game, mainly due to the aforementioned fact that you need one in your team. The level will literally not start unless you have one. This is due to the Tech’s hacking ability which is used to open doors, thus allowing you to progress.

“I get by with a little help from my friends.”

With all of this being said the game play results into a solid, creative, and fun co-op experience. The latter point however is also one of the game’s downsides. Single-player is nigh impossible due to the bots being well…bots. Therefore, having at least a partner is necessary, and even that is difficult. For best playing experience, four is both the max number and the recommended number of players. However, since the game is available on Steam, it happens to be everyone’s favourite price (free :3), you shouldn’t have any problem finding three other alien hunters to fight with you. All in all, the game shines up to be a great example of what a free co-op game could, and after this, should be. The only real dings against it are the near barren story, the reliance on a single class, and the ridiculously useless AI. However, the good clearly outshines the bad here. 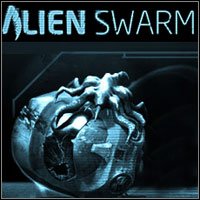 Final Thoughts
The only real dings against Alien Swarm are the near barren story, the reliance on a single class, and the ridiculously useless AI.
File Under: Action, Multiplayer, PC
×