The Assassin’s Creed franchise used to mean a lot to me as a kid since the first game released back in 2007. Each time a new entry came out I would spend countless hours losing myself in the new setting and characters during the long Winter break. However, after Assassin’s Creed IV: Black Flag, I got burnt out on the series and haven’t touched either Unity or Syndicate because they just seemed to be more of the same type of experience that Ubisoft had been delivering for years on end. Assassin’s Creed Origins is the massive shakeup the franchise needs to feel fresh again, packing in RPG styled mechanics and a brand-new combat system to reignite the fans lost passion for the series.

Assassin’s Creed Origins tells the tale of the last two Medjay of Ancient Egypt, Bayek and Aya, on their quest for revenge and belonging. After the tragic death of their son, Bayek is fueled by revenge and sets out on a quest to track down and assassinate everyone responsible so his son’s soul may finally rest in peace.  I loved Bayek as a character and would instantly put him right up there with the likes of Ezio and Edward. Deep down he’s a conflicted man who used to adore his role of being the Pharaoh’s protector, but now feels tainted and dirtied due to all of the blood he’s shed in his son’s name. Bayek’s main quest feels rather one-dimensional at times as he pinballs from one target to the next with predictable plot twists, but his lovable personality and charm really come out during side quests as he spends time with the people of Egypt and helps them solve their problems.

When Aya gets her chance in the spotlight as Cleopatra’s blade she commands the screen with presence. Her scenes are rather limited, but this is where the real impact of the story lies. Her motivations and goals are separate from Bayek’s as she makes her way up the command chain to please her queen. Bayek feels stuck in the past because of their shared tragedy while Aya looks towards the future and where she plans to belong. My only gripe about Aya is that she lacks background. I would have loved to experience a flashback of her with Bayek and her son to show what she used to be like before she became such a powerful badass because at times she can appear heartless.

One aspect of the story I could do without is the modern day narrative. Ubisoft continues to prove that they don’t know where this part of the overarching tale is headed. Fans will be able to get some joy out of reading into new files and documents to understand the future of the war between the assassins and the Templars, but since Desmond died in Assassin’s Creed 3 I haven’t remotely cared for this part of the franchise.

While Ubisoft may not know how to execute on a modern day component, they definitely know how to make amazing historical sandbox game worlds for players to explore and marvel at. From the gorgeous cities full of distinct architecture to the stunning views from the top of the pyramids, Ancient Egypt comes to life in Assassin’s Creed Origins and this is not just the largest game world in the franchise to date, but the best one the team has produced yet. Players have tons of activities to take part in, including coliseum battles, chariot racing, hunting, and tomb raiding. That’s just touching the surface when every side quest in the world is a treat to play. Compared to the main quest where Assassin’s Creed can feel predictable, Origins nails variety in its side quests and each one feels refreshing as you explore new quest lines full of powerful characters and memorable moments. Even after completing the main quest after 20+ hours of play, I still have over half the map left to discover.

The combat in Assassin’s Creed Origins is sure to be a divisive topic. I was someone who got bored of the traditional combat system after years of lacking innovation, but this new system feels half-baked as its replacement. While the combat may seem closer to something like The Witcher 3: The Wild Hunt, I would compare it to more of a lite-version of For Honor because it feels like it was built for 1v1 situations in the coliseum battles instead of multiple engagements. Bayek doesn’t play like a uniquely skilled warrior trained to protect Egypt, but rather one of the regular goons using the same techniques. It can be infuriating at times to get swarmed by shielded enemies or archers on horseback and not feel like you have the tools necessary to stay alive as you’re hit from all angles.

The choice to make Assassin’s Creed into an RPG is an interesting choice, but one that I personally dislike because it breaks the pace and flow of the story. There were so many times where I felt invested into the story only to be told that I would get killed instantly if I didn’t take the time to grind side quests and activities to raise my level. The level bar just serves as the replacement for the desynch invisible wall areas that stopped players from exploring new areas early on in older entries of the franchise.

The RPG mechanics also stops stealth from being a viable option of gameplay. If you’re under-leveled to tackle a garrison then Bayek will not instantly kill an enemy with the hidden blade when you stealthily approach them, raising the alarm and starting a fight that is hard to get out of. The game no longer tells you when you break line of sight and never provides enough hiding spots to allow players to retreat to so you become anonymous again. The one stealth mechanic I love is the literal eagle vision known as Senu. This bird allows you to map out where enemies, treasure and high-value targets are located before you decide to engage. Senu can even be upgraded to be used in combat herself and annoy targets.

When Bayek levels up he acquires ability points for players to spend in upgrading his combat, stealth, or archery abilities. Many of these abilities are ones that your favourite assassins already had in their arsenal by default, which kills some of the excitement when players acquire points. I expected to gain access to new moves to deepen my move-set in combat, but instead was treated to the ability to do a jump attack and hijack an enemy horse. The Archery abilities are the only one worth the immediate points because they allow players to do fun trick shots.

The last component to address is the scum of the earth to infect single-player games, loot boxes and microtransactions. Thankfully they are not required to complete the story, but I did use the free credits every players receives to get a material packs to upgrade Bayek’s equipment because it takes way too long to grind materials. I could have spent hours just hunting for materials and I wouldn’t have been able to upgrade Bayek to the level I did within a minute of using credits. These packs are accurately titled, time savers, but the fun doesn’t stop there. Want more ability points, buy them. Want more randomized gear, buy them. Want a new outfit or mount, you guessed it, just buy it. I don’t believe these systems should be in single-player games because it sours the experience and feels scummy, but it’s up to you, the consumer, to vote with your wallets and decide if there’s a place for them after all.

Assassin’s Creed Origins is a refreshing step for the franchise, but I personally dislike the way the RPG mechanics have been implemented along with the inclusion of microtransactions in a single-payer title. I can forgive the combat system because it can be fun at times, but breaking the flow of the story to grind levels doesn’t fit in an action game like Assassin’s Creed. The real joy of this game is exploring the vast sandbox of Egypt and taking part in every one of the various activities and exciting side quests that make up this exciting game world.

Assassin’s Creed Origins brings Ancient Egypt back to life with the best sandbox world Ubisoft has made to date. However, a half-baked combat system and poor RPG mechanics sour parts of the experience. 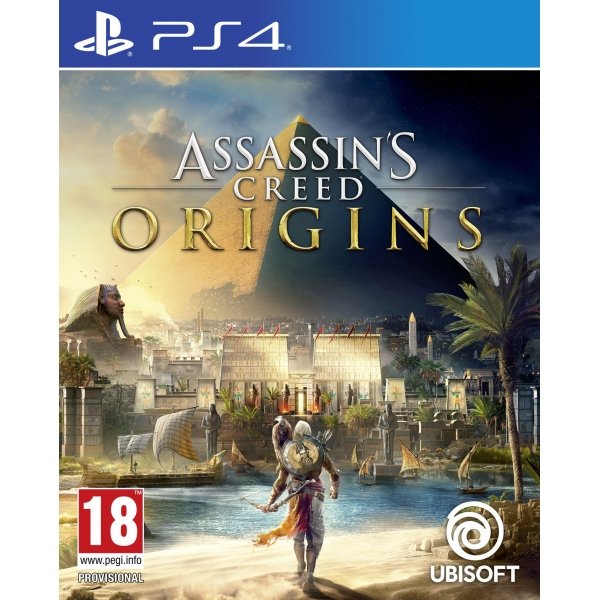