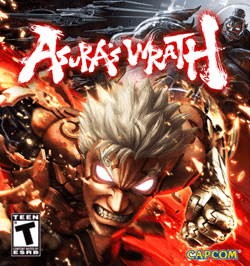 You Are Not Ready

These days the word “epic” is often thrown around to describe things that are above average, or just remotely interesting. It is a word that has come to occupy a space slightly above “good” but below “legitimately unique and special.” Everything from a nice shade of pink on slippers to the delightful froth on a well poured mug of root beer can now be “epic.” But there was a time when people used this word in its classic, dictionary sense to describe things that were so far beyond the sphere of normal human experience that they approached the godlike. It was reserved for feats or people worthy of inclusion as myth and legend. While Asura’s Wrath as a whole doesn’t live up to the word, the scale of action portrayed in Asura’s Wrath is just that. Epic. I guarantee that this is a game that will show you things you have never seen before.

The story of Asura’s Wrath is mythic both in scope and in inspiration. Rather than going back to the Greco-Roman well once again, Japanese developer CyberConnect2 have looked to their own region of Asia, liberally pulling from Indian/Tibetan Buddhism, Japanese Shintoism and China’s Journey to the West to create a world unlike any ever seen before. A team of demigods known as the Eight Guardian Generals are the world’s first and last line of defense against a corruptive influence known as “The Ghoma.” After an elaborate betrayal, one of these generals, Asura, finds himself seeking revenge against the now self-proclaimed Seven Deities, and a 12,000 year story of vengeance, violence and pure, unbridled, cosmically fuelled rage unfolds one global-scale fist fight at a time. In many ways, this is a little of what God of War might have been like, had Sony Santa Monica been drunk, psychotic and given carte blanche by Sony to make a game on the provision that the entire staff was fed a steady diet of LSD laced pizza and mandatory “Dev Club” fist fighting in the back lot. This is bombastic stuff, with melodrama on a scale like that of The Odyssey or The Aeneid, as epic dudes, utter epic dialog, before bouncing off to do epic things without any recognition for how ridiculous and over the top things are. It is, for better or for worse, completely off the rails. Have you ever seen a man punch the ground so hard the force of impact hurtled him into the stratosphere? After Asura’s Wrath, you will.

On the presentation side of things, Asura’s Wrath has some of the most inspired art direction seen in years. The heavy plumbing of Asian religious iconography creates a look that’s guaranteed to pique the interest of unfamiliar Western gamers, and tickle the fancy of Asian gamers who may have wondered what a “Buddha ship” would look like. Well now you know. On the other hand, the engine, which is Unreal 3, suffers from all the usual creaks and groans we’ve come to expect by this point. Frantic cut scenes can cause screen tearing, and the texture quality goes from blurry to sharp slowly enough that people will notice. In other words, it’s Unreal 3 being Unreal 3. Sound is suitably “epic,” with Capcom footing the bill for the Tokyo Philharmonic Orchestra to wax hysterical, as well as a full choir to add that extra dash of over the top musical accompaniment. The dialog comes in both English and Japanese, although true Otaku will switch over to the Japanese track without hesitation. One odd thing to note is that it looks like localization for lip synching may have occurred, as the English dub actually fits mouth movements more accurately than the Japanese dub.

And then there’s gameplay.  Oh, where to begin… There will be—and rightly so—arguments about whether Asura’s Wrath can even be called a game. The game is structured exactly like an anime series, with each of the game’s 18 chapters having an opening, complete with credits, “commercial break” in between, with bumpers, and even a “next time on Asura’s Wrath” trailer that teases the next episode. That structure is more appropriate than you might think as the majority of each episode—which averages from 15-30 minutes each—is mostly real-time cut scenes courtesy of the Unreal 3 engine. The actual gameplay borrows heavily from the Dragon’s Lair and God of War schools of gaming with interactive sequences that rely the majority of the time on Quick Time Events, while the occasional on-rails shooting sequences and 3rd

person beat ‘em up elements bow in from time to time. There’s a summary screen at the end of each chapter that shows how well players have done during the interactive sequences. My first foray through Chapter 2 has the clock totalling in at 38 seconds of actual playtime versus the amount of time I spent watching. The total game is about six hours in length and players can probably expect to spend a little over two hours of that in actual gameplay.

Here’s where Asura’s Wrath has its biggest caveat emptor. Potential buyers need to understand that what this game is, is really an over the top, mythical, violence laden digital anime “season” that has some interactive elements laced in. This is not a game for players looking to get their money’s worth of at least 8 solid hours of actual, interactive play. This is more for fans of anime, fans of Japanese or Otaku culture in general, or merely the curious that want to see something truly unique and have the disposable income to spend $60 without feeling bad about it. It’s a pricey admission for what amounts to the “shortest 1st

season of a Japanese serial anime ever” but for people that have enjoyed the ridiculous, off the charts insanity of anime like FLCL, Dead Leaves or even the end game “blow the doors down on EVERYTHING” action of Neon Genesis Evangelion’s theatrical conclusion, this will be something you might want to look into. The scale of the action in this game has to be seen to be believed. Fights occur with a katana close to 400,000 km long. Vast fleets of ships based on Buddhist principles soar through the sky. The Earth is visually compared to beasts and technology actually larger than the planet itself. This is a “game” where the director’s imagination was allowed to run completely wild, with no limits. The end result is action and vistas that the audience has likely never seen before. The ambition of the scale is so enormous it’s unlikely to be rivalled by any other game this year. Or years from now for that matter.

So I say, with caution, I enjoyed Asura’s Wrath immensely, but my review score is a compromise. A typical gamer, or people more strapped for cash will probably want to wait for the game to drop to at least 50% of its current price before buying. Either way, if you have an urge to see insane action on a scale you’d scarcely thought possible, put this on your “to do” list for some point in the future.

An anime fan or aficionado of the unusual should go out and get this game immediately if money is not an issue.
REVIEW SCORE
7
File Under: Anime, Horror, PlayStation, RPG