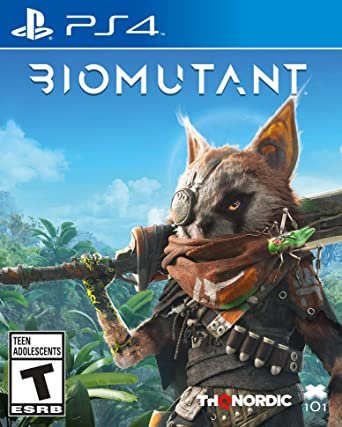 This was the case with Biomutant, initially announced at Gamescom back in 2017. I remember there being quite a bit of hype surrounding it—similarly to No Man’s Sky, gamers let a game’s concept get ahead of its content. Strangely though, Biomutant completely disappeared until a week before its release—even Polygon cracked jokes about that fact.

And I’ll admit, I was actually pretty curious about it. When I first saw the trailer, I genuinely liked the idea of a game that looked like it combined The Secret of NIMH with Fallout. But what I played left me disappointed and dejected—Biomutant is a complete mess of unrealised ideas and bad design.

Defined as a “post-apocalyptic kung-fu fable,” Biomutant is set in a world that was destroyed thanks to the cartoonishly, on-the-nose: Toxanol Corporation, which dumped so much nuclear waste into the world’s ocean that it genetically mutated much of the wildlife, and the entire ecosystem—wiping out all the humans, and only leaving anthropomorphised animals, and mutated monstrosities. Now, terrible monsters called “World Enders,” are eating away at the roots of the last thing holding the world together, “The Tree of Life,” and it’s up to the player to either save the world, or destroy it.

It’s an environmental narrative that I wasn’t totally expecting from this game, and one of the few things I have any major criticisms of. The problem isn’t the story, so much as it is the way it’s told. Almost all of the game is dictated through the game’s narrator—a charming, British character who describes moments and backstory as a Dungeon Master would in a game of Dungeons & Dragons. While, initially, this is fairly quaint and adds a charming, Fable-esk vibe to the whole proceedings, it quickly becomes incredibly frustrating as dialogue is delivered by the narrator and not the character who is speaking.

Now under normal circumstances, this wouldn’t be a problem; but in Biomutant, for whatever reason, the game decides to waste the player’s time by having the speaking character make gibberish sounds for 5-10 seconds, before the narrator comes in and explains what they’re saying. There’s even an option in the settings to reduce gibberish that does absolutely nothing—even turned down to one, there was still a decent chance characters would make nonsense sounds for what felt like forever, until the narrator told me what they were saying.

I very quickly grew to hate any dialogue encounter because it felt so needlessly roundabout, and was made the more frustrating by the uncertainty of knowing when the gibberish moment would be quick or long, and trying to skip it with a button press would result in skipping the narrator instead.

The biggest problem with Biomutant’s gameplay is how incredibly shallow it is. This is immediately apparent when you begin the game and are tasked with creating your character. To start, you’re given a choice of mutant-style—a sort of race choice that offers a different look, and minor stat changes. However, this is made immediately redundant when the next option allows you to DRASTICALLY change your ability scores—utilizing a strange stat wheel-grid rather than the traditional sequential allocation of a number of points—but also completely changing the way you look, making the initial choice pretty much redundant.

Finally, after you’ve chosen an elemental resistance and fur colour and style, you’re given a choice of five classes. There’s no real distinction between any of them since you can use any weapon as long as you pick it up; so the only difference in class are the individual class abilities—the Dead Eye can utilize an instant reload, while the Saboteur can Dual Wield—and class perks, both of which change the gameplay so minimally, they’re basically pointless.

Combat is a mindless button masher with little in the way of strategy or style. Every melee weapon feels exactly the same, lacking any weight or audio/visual feedback from attacks—seriously, the sound of swords colliding with enemies is so quiet, it sounds like it’s a mile away. While every weapon has a basic combo, a jump and dodge attack, and two abilities you can unlock, combat usually devolves into trying to engage with melee, taking hits from wildly unpredictable telegraphs, then retreating to use guns which deal as much damage, if not more, than melee.

This is made worse by Biomutant’s janky “targeting” system that eshews the traditional button press lock on to a single enemy for less reliable auto targeting; which is made even worse by Biomutant’s terrible camera which is held so tight to the character, you’ll often get hit by enemies off screen, since Arkham Asylum style attack indicators are placed above the enemy’s heads and not the characters.

Biomutant’s narrative RPG elements are equally hollow. While it has an open world to “explore,” the world itself feels very linear in its design, with encounters both combat or narrative, feeling very few and far between. Furthermore, much like Fable, the game has a morality system that is pretty binary and leaves little room for actual moral quandaries. Right from the beginning, the game basically railroads you into choosing to save the world or destroy it. Naturally, I went for the Light path, so when I went to meet the leader of the good tribe, I was told accepting his quest would lock me into the “Save the World” quest path and all other options would be unavailable.

In order to do this, I would have to “unite the tribes,” which were fractured after the character’s mother’s death. To do this, I would have to raid each tribe’s village and overthrow their leader. No option for peaceful resolution, no options for conversational interactions—insofar that the only “peaceful” resolution is trying to convince the factions leader to join you, rather than kill them after you’ve just butchered your way through their town—just show up and engage in the terrible combat; wash, rinse, repeat. While you’re told you can change factions at any time, the binary decision-making doesn’t really leave a lot of room for experimentation or choice.

Furthermore, the game just isn’t very pleasant to look at. While visually, the game is very bright and colourful, tonally it feels very at odds with itself—creating this whimsical fantasy style that is ruined by the more realistic and gritty looking characters. Furthermore, everything looks very pixelated and rough, and while there’s potential for a unique atmosphere with the made up words for everyday items or buildings, it’s just not all that interesting or lived in—often feeling very empty and devoid of character.

But where Biomutant suffers the most is in it’s design. The game is, at best, sloppy; and, at worst, broken. I played the PS4 version, and the game runs almost constantly at 20 fps; frequently dropping frames in more densely populated areas to a depressing amount. Music is blatantly recycled during dialogue encounters, cutscenes start with no transitional animation frames, the game has noticeable texture drop in and out, and frequent visual glitching. Any time I unpaused the game, I was greeted by the round, textureless head of my character, until his fur loaded in a second later. When I tried to put a defensive upgrade on my pants—which adds a visual component to the gear—I was shocked to see it floating a clean inch off my character.

The point where I completely quit the game was when I spent a good five minutes fighting a mini-boss monster while wandering the world. It was a level higher than me, so the fight was a bit tough—not through real challenge, just through a couple hits taking off most of my health. However, as I got the creature’s health down almost to nothing, I guess it somehow jumped outside of the combat field, because it completely forgot that we were fighting and started walking away. When I swiped at it again, it suddenly remembered we were fighting, and also got a second wind because it’s health was completely full.

After engaging it a second time, it again jumped out of bounds and quickly ended combat, only to begin it again with full health, and that’s when I had enough. I knew the game was never going to get fun enough, or interesting enough for me to ever care about it.

Honestly, I didn’t want to be this mean to a game that was supposedly developed by a team of 20 people—who I’m sure worked very hard, and put a lot of love into this game. But as it stands, Biomutant is a mess, even after a 2.0 update that BARELY improved the game. How Experiment 101 thought this was ready for release is beyond me. The same way people forgot about Biomutant after it was announced; I have a feeling people are going to forget about this very quickly after it’s release.

Biomutant is the least fun i’ve had with a game in a while. Broken, shallow, and above all, boring. This mutant should’ve stayed in the ooze.
REVIEW SCORE
4
Buy On Amazon
File Under: