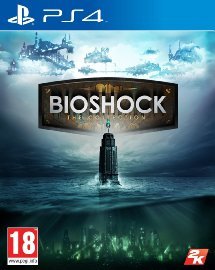 BioShock isn’t that old. 2007 might seem like a lifetime ago for some of you, but it was a last-generation game after all. Even though Irrational Games (and several other developers) pioneered the idea of the narrative FPS ages ago, BioShock did it in such a way that made a rippling effect throughout the industry that’s still felt today. So it makes sense that 2K is trying to tap that lucrative well again, and a full package of just about everything BioShock ever made (except for multiplayer) is preserved in BioShock: The Collection.

Although I have issues from a narrative standpoint with the last half (you can literally feel the team running out of ideas or trying to write themselves out of a corner), BioShock still holds up. Man, that’s one hell of an intro, right? It not only sets up your quest in minutes flat with a no-nonsense plane crash, but it’s also littered with clues for later developments, which makes replays that much more rewarding. It’s definitely an adventure first, shooter second, as some of the more awkward control issues hamper that experience. For example, the delay between using Plasmids, which is essentially magic and proper weapons. But if the former is what you’re looking for, it delivers, especially when it comes to atmosphere. As the only bit of actual new content, collecting film reels unlocks bits of director’s commentary that you can probably watch on YouTube at this point. So if you’re expecting anything new, that’s all you’re going to get.