Songs of Keeping in Time 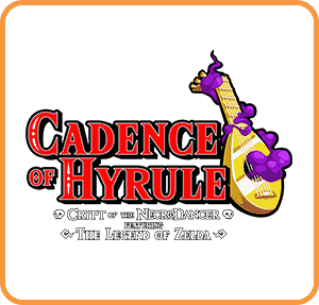 Cadence of Hyrule’s sense of rhythm plays into every time I’ve caught myself walking to the beat of a song I was listening to, all within the carefully constructed confines of the Legend of Zelda universe. There’s something inherently natural feeling about navigating its music-driven world to the beat of remixes of songs I’ve heard for decades, like the music has never been separate from each step I took across the sprawling world of Hyrule to begin with. But it’s not without its challenges. Cadence of Hyrule’s music informs every movement, attack, and strategy, and it is the basis on which this lovingly crafted tribute is built.

Alongside series mainstays Link and Princess Zelda, Cadence of Hyrule stars Crypt of the NecroDancer protagonist Cadence, who finds herself transported to the world of Hyrule, afflicted with a curse that requires one to move along to the rhythm of its music. Each playable character differs slightly in their ability set, but the bulk of the game is the same regardless. The key to progress is understanding not only how music limits your movement, but also allows you to react accordingly to the enemies and attacks before you.

I played primarily as Zelda, who has an ability to reflect projectile attacks. Every beat of the music brings an arrow, a boulder or fireball closer to me, but by hearing the music I know exactly when it will reach me and know when it does I’ll have my barrier ready to send it right back. Eventually these interactions became like muscle memory for me, like a dance my fingers knew by heart. When Cadence of Hyrule is at its best, it provides a level of musical catharsis a lot of rhythm games haven’t for me, and it comes from that danger that accompanies every song.

That all being said, I can’t say there weren’t periods of frustration and difficulty throughout. The combat-driven nature of Cadence of Hyrule means it isn’t as forgiving for a missed beat or poor movement or attack choice, and it meant that I found myself having to repeat sections after deaths and lose equipment I’d collected to that point every time I was revived. I appreciate the challenge, but it’s easy to see how it would be maddening to even loyal Zelda fans. It’s a game that encourages experimentation, but that same notion can undo swaths of progress in course of a few bad moves.

While longtime Zelda fans might find the difficulty prohibitive, the retro stylings of both the aesthetic and the music that acts as the basis of the entire game will likely keep them going like it did me. Cadence of Hyrule’s gorgeous, sprite-based look harkens back to games like Link to the Past and The Minish Cap, all set to the remixed score by Danny Baranowsky, which pulls from songs dating back throughout the Legend of Zelda’s entire catalog. There’s a care for what the game’s working with that makes it all the more infectious. Even when I was getting set back in progress, my desire to see how Cadence of Hyrule would riff on old songs, environments and enemies kept me going. If its departures from the formula Zelda fans know and love seem daunting, the familiarity of its world and its music was enough of a nudge to keep me going.

Cadence of Hyrule’s ability to bottle the magic and songs of the Zelda series into a genre-blended, but still familiar experience sits somewhere between nostalgic and gleeful novelty for me. It is so attuned into this music, an aspect of the series that has stuck with me even when I neglected to play the latest game, that it’s like coming back to a place where the sounds that surround me still feel like home, that even when the game is at its hardest, I find it easy to step right back into the rhythm.

Cadence of Hyrule is a lovingly crafted, challenging, but rewarding ode to 30 years of music.
REVIEW SCORE
8.5
File Under: Nintendo, Nintendo Switch, Zelda