A Second Wind for an Exceptional Platformer 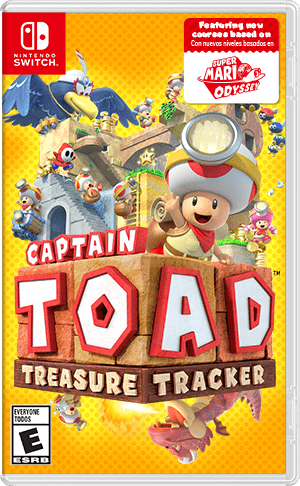 Since its launch, the Nintendo Switch has been home to a steady stream of re-released games from the Wii U library, which housed a few excellent games that never got a deserving audience due to the platform’s catastrophic sales performance.

Captain Toad: Treasure Tracker, a unique spinoff from the 3D Mario series, is Nintendo’s most recent rescue from those doomed Wii U exclusives, and it’s a perfect fit for the Switch.  I occasionally found the display to be a bit too small for portable play, but overall, the game’s bite-sized levels, episodic structure, and enticing hunt for collectibles make for an excellent addition to the Switch’s superb library of platformers.

Captain Toad: Treasure Tracker is a short 3D puzzle platformer based on characters from the Super Mario series. You assume the roles of Toad and Toadette as you traverse miniature levels to seek out hidden gems, Power Stars, and other collectibles. Stripped of the most vital element of a platformer–the jump button–you must find other means of exploring each level’s nooks and crannies for hidden secrets and pathways. It’s a wonderful subversion, causing every familiar enemy type–Shy Guys, Goombas, Biddybuds, etc.–to pose a larger threat than in any other Mario title.

Four years later, the game holds up well, and is–unsurprisingly–even more enjoyable thanks to the portability of the Switch. Each level is short and concise, making for a pleasant five-minute experience to pop in and out of while you’re waiting in a queue, taking the train to work, or having a sit-down in your preferred enclosure of privacy. Most levels are fully observable on a single screen, requiring constant use of the camera controls to peek around corners for hidden gems or golden mushrooms. This gives each level a tangible aspect as if it’s a large puzzle you can hold, observe, tinker with as you mull over its peculiarities. Playing in portable mode on the Switch complimented this Rubic’s Cube effect.

For all its portability and bite-sized glory, Captain Toad suffers from the size of the Switch’s display. The game’s presentation is as crisp and vibrant as every other game utilizing this playful art style (which is nearly identical to those of Super Mario 3D World and Super Mario Odyssey), but I found myself occasionally squinting at the display in order to make out the minuscule Toad’s movements on the console’s 6.2 inch display. You’re able to zoom in at a single button press, but I like to have that bird’s-eye view of these toy-like levels. A minor gripe, but it’s a compromise I found myself frequently irritated by.

That said, the aforementioned crisp and playful art style of Captain Toad: Treasure Tracker looks brilliant on the Switch’s 720p display. Nintendo has proven to be potentially the most reliable developer when it comes to software/hardware performance compatibility. Captain Toad on the Switch glides along at a stable and smooth framerate (my semi-trained eye suggests 60 fps, no less than 40) and never yielded a technical hiccup during my 6-hour run-through. It’s a dazzling world of Piranha Plants, shimmering Power Stars, and lively character models from start to finish. All of this is commonplace for Mario games since the Galaxy series, but it never ceases to give me that cotton-candy thrill I can’t seem to get enough of.

At the time of publication, I’ve spent about ten minutes playing Captain Toad’s 2-player mode—an exclusive feature of the Switch version—and I expect to invest very little additional time afterwards. In 2-player mode, Player 1 controls Toad or Toadette while Player 2 uses a single Joy-Con’s motion controls to aim shots at enemies, gems, coins, and most other items normally left to the titular treasure tracker. It’s a nice addition for cooperative play with the kiddies, but camera movement becomes less intuitive (both players can control the camera, though Player 1 cannot move and control the camera simultaneously) and it adds little enjoyment to the main pull of the game.

That pull–collecting gems, coins, golden mushrooms, and all the delights of 3D platformer collectathons–is here in spades, and the Switch makes for an excellent home for it. After unlocking all of the game’s 60+ levels, I’m excited to dive back in and backtrack for all the gems, level challenges, and other tasks I may have missed out on along the way. Captain Toad: Treasure Tracker is yet another lost treasure from the Wii U that feels so correct for the Nintendo Switch.

Captain Toad: Treasure Tracker is another excellent addition to the Switch’s expansive library of quality platformers.
REVIEW SCORE
8
File Under: