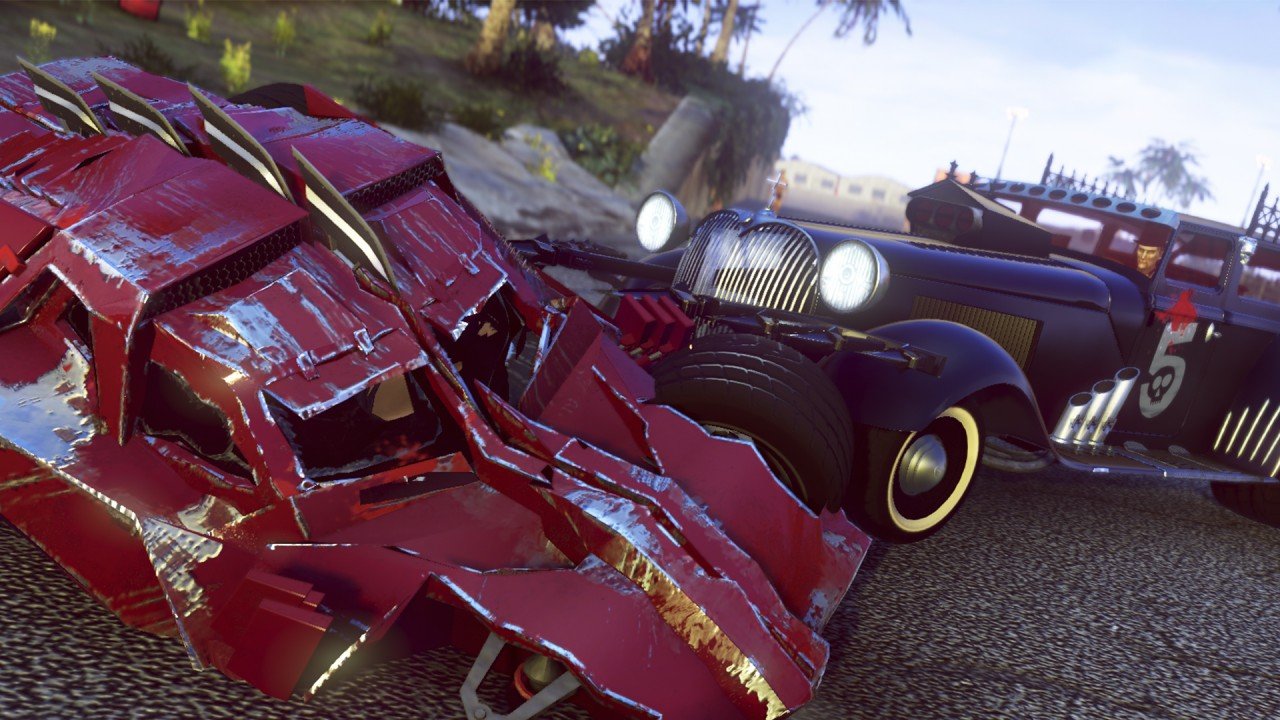 For some reason, I thought I might like smashing stuff a little less as I aged. I don’t know what was wrong with me. I guess I thought having a passion for destruction and going through adolescence were mutually dependent. But as long as there’s a controller in my hand, my love of old fashioned boom-boom seems to know no bounds! All of which brings me to Carmageddon: Max Damage, which, as you can likely surmise from the title, is a game rooted exclusively in providing righteous carnage, with little or no interest in supplying anything else. If you’re looking for anything new or special, look elsewhere.

The Carmageddon series apparently kicked off in 1997, which makes sense, since the latest offering very much feels like a Twisted Metal clone (with a little Death Race 2000 tossed in for good measure). Essentially it’s a racing game designed to bring out the absolute worst in people. There are three ways to win any race. Either a) cross the finish line first (how original!) b) destroy all the other cars (smashy-smashy!) or c) splatter all the pedestrians and cows that you see (ew!). That’s pretty much all there is to the game at its most basic level. Stainless Games has designed a product meant to appeal purely to gamers’ basest desires for destruction, and to be fair, there’s a market for that. Unfortunately, this type of game, which would have been really exciting in 1997, seems limited by the standards of 2016. Now, it’s the sort of thing you might expect to find as a mini-game in GTA, not as a full standalone release. 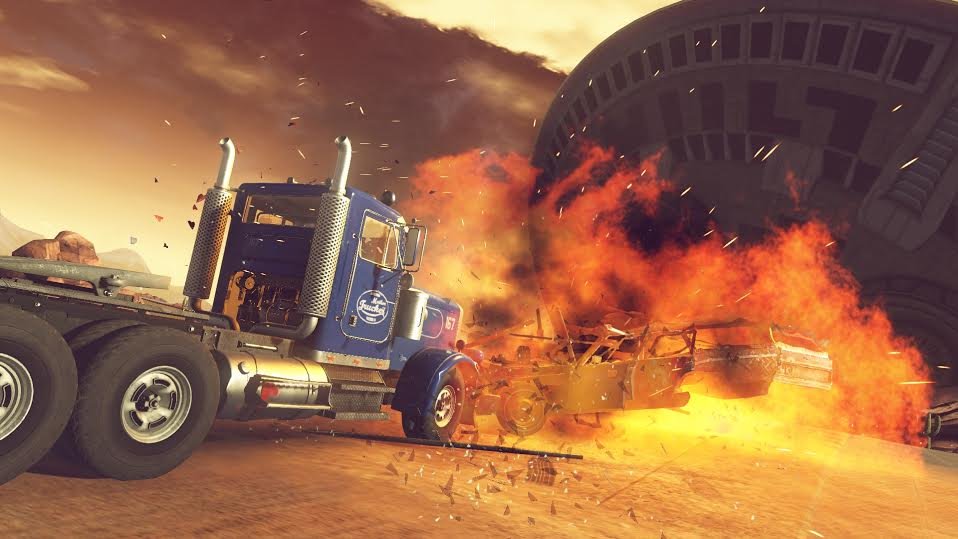 Yet somehow Carmageddon: Max Damage was created as its own game, which means there are all sorts of customization options and extra tracks to fill things out. You can add all sorts of ridiculous weapons to your vehicle, such as spikes, blades, flame-throwers, or even giant vacuums to suck people towards your car. Pretty much anything that will increase your chances of causing more death and dismemberment. Crunching people will also earn you points to fix your damaged vehicle mid-match, which is a nice touch. There are various types of events and challenges in every area, and the more you play the more locations you unlock, including everything from a construction site to a brothel (so, it’s a very inclusive game…sigh).

Not that you’ll be able to notice much difference between the racing locations. The graphics are pretty rough, and Carmageddon: Max Damage almost looks like a barely passable PS3 game. Perhaps this was done with 90s gaming nostalgia in mind, but if so, it’s not stylized enough to feel deliberate. It mostly just looks clunky and ugly, no matter what the setting (do you miss game characters who seem to get stuck in a single pose when you hit em’ with a car? Good news, they’re back!). The cars themselves look ok, but they handle pretty horribly. Essentially they all feel like tanks, and it’s difficult to cruise around levels with much speed. You pretty much have to decide been driving fast or having control of your vehicle, and that gets tiresome quickly. There is a lengthy campaign mode for folks who really want to get the most out of their Carmaggedon experience, but I personally found it all so tedious that I can’t imagine why anyone would want to use it voluntarily. The best option is to play “bull-pen,” which is a battle mode of sorts that forsakes racing for extra vehicular destruction. That’s as good as Carmaggedon gets, and it’s the sort of thing that would have been incredibly exciting circa 1997. Sadly, time machines are not included with purchase.

So, obviously Carmaggedon: Max Damage isn’t exactly a groundbreaking game or even a particularly good one. The game’s kickstarter origins as a long lost 90s gaming franchise revival are quite clear. This is no AAA title, and even the somewhat lower price point feels like a bit much. However, as much as I might criticize the game’s design and clunky controls, I can’t pretend there wasn’t some fun to be had playing it. The mindless destruction is amusing, and it’s all presented in such a gleefully tongue-in-cheek manner that it’s hard not to chuckle at the absurdity of it all. The game is best enjoyed as an arcade-style time waster. The kind of thing you might enjoy giggling at and zoning out with briefly from time-to-time if you’re a fan of the original game or Death Race 2000, or if you just enjoy running over cartoon characters with a death machine. There are worse games out there, but then again, there are certainly better ones as well. I suppose it scratches a certain boom-boom gaming itch for players who are desperate for any new content in the long n’ empty summer gaming release schedule. Faint praise? Oh, sure, the faintest. But at least that’s something.

Carmaggedon: Max Damage isn’t exactly a groundbreaking game or even a particularly good one. 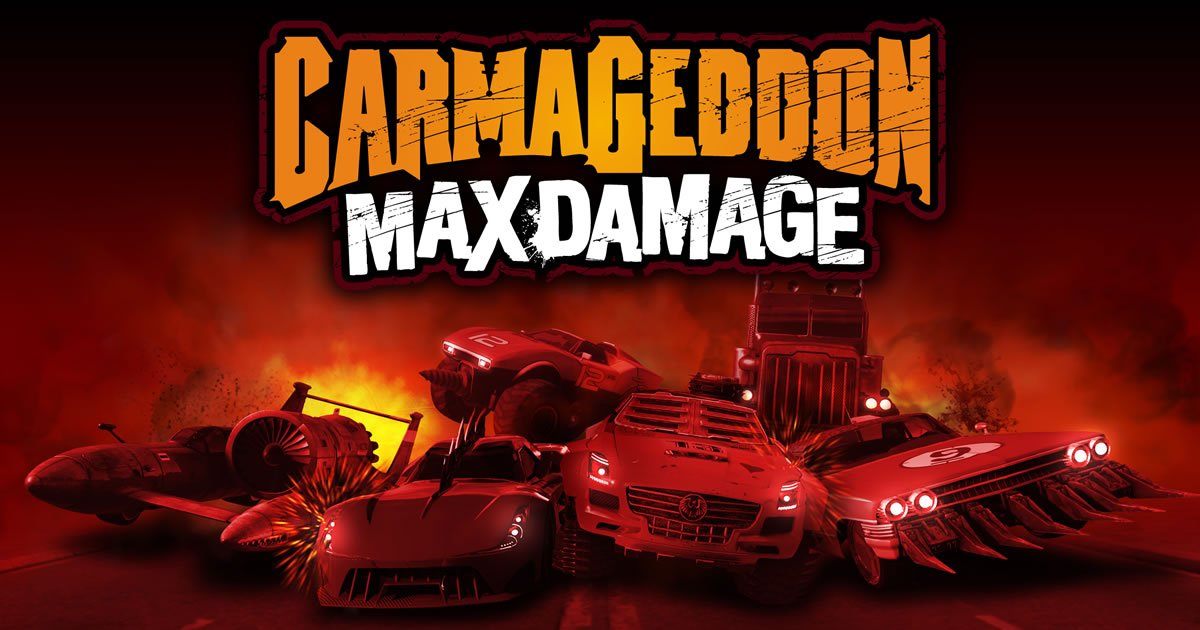