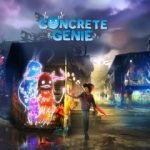 Concrete Genie feels like a game that has always existed, mostly due to its excellent art direction and charm.  The title evokes a familiar feeling reminiscent of classic cartoons and videogames aimed at a younger audience, making it an exciting addition to the growing family of PlayStation exclusive titles.

The game follows Ash, a young boy who happens to live in a very polluted and depressing port town known as Denska.  If things weren’t bad enough, Ash also has to contend with bullies who like to pick on our hero for his uncanny ability to draw and paint.

Concrete Genie opens as Ash loses his trusty sketchbook after said bullies decide to tear it away from him, scattering its pages across the game world. All is not lost, however, as Ash quickly befriends a spirit or Genie known as Luna, who imbues Ash’s paintbrush with magic. From here, players’ must aide Ash in recovering his lost pages, while sprucing up Denska in the process.

Bullying is an interesting and sensitive topic, especially in regards to videogames aimed at children. Concrete Genie developer Pixel Opus have done a great job in conveying the issue, while tactfully remaining lighthearted but still poignant enough to deliver a strong message.  Avoiding spoilers, the game slowly opens up and explores the root cause of bullying, exploring both sides of the victim/bully dynamic. Ultimately, the cast of Concrete Genie’s human characters feels well-realized and believable. Instead of just cartoon caricatures or archetypes, that sometimes can be found in other titles aimed at a younger demographic.

Concrete Genie at its core is a puzzle-platformer, with the bulk of its charm and uniqueness coming from the puzzle elements within the game. Players quickly discover their ability to bring forth monsters from within Ash’s sketchbook to life. These monsters or Genies’ act as the primary means in which Ash can tackle the various puzzles thrown at him.  Different appendages and monster pieces can be unlocked by finding pages strewn about the game world. At times, Ash’s sketchbook feels more akin to a bestiary than a simple sketchbook.

In addition to Genie stencils, which mostly are cosmetic, the player must also collect a slew of environmental brushes or stencils that fill Ash’s sketchbook. These generally are themed around different elements or environments and can range from stars that transform a drab wall into a mesmerizingly lit-sky to apples that your Genie can consume.

As the name may imply, both Genie and environment stencils can only be placed on concrete surfaces which usually take the form of the sides or facades of buildings.  Genie characters move in-tandem with Ash but are limited by the building or structure that they occupy. In other words, certain situations require Ash to find alternate routes or new Genie spawning points to proceed.

As Ash, players’ can either by default, use the Dualshock 4‘s gyro-motion controls to aim and place down a stencil or map Ash’s painting arm to the right stick.

The Genies’ themselves come in three distinct elements, fire, wind and thunder, with each being used to surpass obstacles or roadblocks. Puzzles are not limited to just elemental challenges. More often than not, most require Ash or the player to place specific environmental stencils on the wall, usually from prompts given to the player by their Genie(s).

In terms of the platforming sections within Concrete Genie, the title feels similar to that of the Uncharted series, albeit, more straightforward and restrained.  This simple approach to gameplay also extends to its death sequences, which only result in a quick reset of the same area in which the player failed. Overall, Concrete Genie may be a bit too easy for veterans but feels just right for those new to videogames or children.

By the later half of the short 6 hours or so, it took me to complete the game — Concrete Genie introduces combat into the mix. Combat, like the platforming and puzzle sequences, feels somewhat simple, but even still, does an apt job in spicing things up and adding some needed tension before its eventual climax.

The thing that first drew me (no pun intended) into the world of Concrete Genie was its visuals. Concrete Genie feels like a mix between the works of  Henry Selick and Double Fine, those being, Coraline and Broken Age, with some of the cutscenes in the games seemingly inspired by cartoons from the 1960s.

Aside from the short campaign, Concrete Genie also offers players a two free draw modes, and a VR mode, which is worth at least mentioning. The VR in Concrete Genie, although not earth-shattering, can be considered to be a nice little bonus, in which players can experience some of the key locations from the main game, but from a first-person VR perspective. The best thing about the otherwise extra mode is getting to see the game in a more cell-shaded, cartoonlike aesthetic that does a job of bringing to life the flat, 2D world of the Genies’.

Mechanically, Concrete Genie is a decent experience, with a certain level of finesse achieved through the dynamics between the platforming and puzzle painting sequences present in the game. My only real issue with the game is the fact that some of the sequences in which Ash must interact with his Genie, to solve a puzzle felt slow. Specifically, the Genie characters sometimes seemed to doddle on for longer than needed.

Concrete Genie is best summed up as one of those short and sweet types of deals and is best reserved for those who may have young people in their lives. Not only does the game offer a fun adventure, but more importantly, one that has a meaningful message about some of the struggles faced by adolescence.

Concrete Genie is best summed up as one of those short and sweet types of deals and is best reserved for those who may have young people in their lives.
REVIEW SCORE
7.5
File Under: PlayStation, Sony