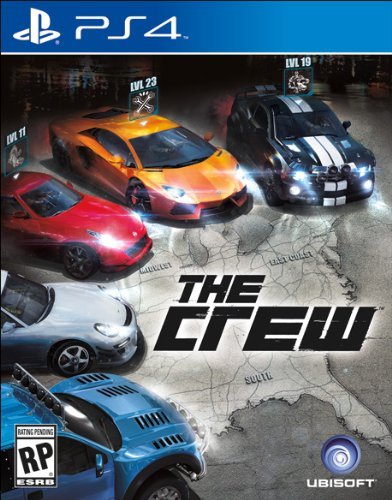 2014 is, at least in the minds of gamers, going to go down as the worst year in Ubisoft’s history. The downgrade in performance for Watch_Dogs, combined with the buggy launch of Assassin’s Creed: Unity is now compounded by a problematic release of The Crew. This time however, Ubisoft is not alone. Like Destiny, Drive Club and Battlefield 4 before it, The Crew is being plagued by that most common of problems, online technical difficulties for a game that relies primarily on being online.

The disposable story behind The Crew is that Alex Taylor, your character, witnessed his brother gunned down by a corrupt FBI agent and an ambitious driver wanting to steal that brother’s position, leader of a racing group called the 5/10. Five years later, Alex is offered a job with the FBI to infiltrate the 5/10 which has evolved from illegal street racing to organized crime. Fast & Furious ludicrousness ensues with players finding an excuse to race for everything. Want to buy a gun? Race to the arms dealer. Got a package that needs picking up? Pick up 80 of them on an open field with the clock ticking. Someone wants to kill you? Race him instead. This game was made for 12 year olds that watch the Fast & Furious movies and believe everything in them is real. If you are this target audience, The Crew will make your pants explode.

On the technical side of things, The Crew manages to impress, not necessarily with detail, but with scale. It’s a decent enough looking game on the PS4, with a steady framerate, and some acceptable lighting effects, though its devoid of weather or particle effects. What really impresses is the size; Ivory Tower has compressed the continental United States into one seamless map that takes a couple of hours to cross from coast to coast. Along the way, players will see the forests of Maine, the wheat fields of Kansas, the Rocky Mountains, the Grand Canyon and beaches of Santa Monica. The landscape is impressively varied, and some might be tempted to simply ignore the game, put on a favourite music list and just drive cross country, watching the landscape change. It invokes that same endless “zen” feeling as the long routes of Road Rash back in the day. Speaking of audio, driving games have always benefited from directional audio and The Crew is no exception. On a home theater system like our Fluance XL series, Big, gas guzzling, American muscle car engines sound beefy when the sub-woofer kicks in, and you can actually hear rival cars coming up behind you in races thanks to the rear speakers. The “whoosh” as cars in the other lane whizz past also feels immersive.

Unfortunately, despite the fact that Ivory Tower has created a promising playground, they failed to capitalize on the stage they laid out.

The Crew is a bit like Destiny for arcade racer fans. It doesn’t have the technical demands of something like Gran Turismo, and it hoped it would be able to rope in players randomly for quick races, or allow friends to form permanent “Crews” to play together. The theory was that players would start with the story missions—which can accommodate up to four real world players—and eventually move into online “factions” that reward money and experience for upgrading car parts and buying new cars in a variety of activities. There’s an RPG-lite mechanic at work where players start with a truly wretched car, and gradually either save up enough to buy a new vehicle, or get better parts to improve performance. Those parts are either bought or won in story or optional missions.

The single player component—forgettable story aside—is competent, but frequently resorts to cheap design cheats. “Rubber banding”—the slang design term that describes cars automatically reappearing back in your driving range should you get too far ahead—happens a lot, but it can wreck a race when you’re in the lead and a car in last teleports ahead of you, directly in your path, not moving, and causes you to crash. There are also “take down” missions that involve repeatedly bashing a car until its “life bar” hits zero, and these vehicles are seriously juiced up. I spent one mission in hot pursuit of the fastest, most agile bus I’ve ever seen, able to dodge my rams like a nimble Ferrari. In some ways, The Crew punishes you for doing well with mean spirited acts of compensation, which almost feels like hostile design choice made by bad players to put players with skill “back in their place.”

The multiplayer fares a little better, impressively managing to integrate itself into every aspect. There are the story missions which up to four can participate in, which makes some races easier if a friend is in a higher performance car, since only one person has to finish first. But there are also multi-player specific activities like “PvP”—which is basically just racing—and more elaborate racing tours that literally take players across the entire country. Joining a faction and working with a crew in multiplayer yields the highest cash rewards for people that want to earn cars rather than using micro-transactions to buy them.

Unfortunately, even the promising online component is let down by The Crew’s biggest sin, some shoddy online infrastructure. As an always-online game, it’s very important that The Crew’s network is up to the punishing demands of thousands of players. It isn’t. The game frequently wouldn’t start because it couldn’t retrieve the save file from the game server. The game itself would suddenly announce network issues that disabled scoring and any activity that wasn’t a story mission. The tragic irony of all this is that  Serkan Hasan the lead designer for The Crew once boasted the game would have a smooth launch. That has definitely not been the case. When loading up a $70 game is roll of dice as to whether you’ll even be able to play it that sessions, that’s a serious problem.

The Crew is another disappointment this year from Ubisoft. The strong foundation of an impressively rendered America with a theoretically easy, seamless online experience is severely hampered by some questionable design decisions and a currently unstable network infrastructure. If Ivory Tower can sort these things out the way Square Enix did with Final Fantasy XIV, there’s a chance they can salvage a promising start before it spins out and crashes on the turnpike.

The downgrade in performance for Watch_Dogs, combined with the buggy launch of Assassin’s Creed: Unity is now compounded by a problematic release of The Crew.
REVIEW SCORE
6.5
File Under: Multiplayer, Ubisoft