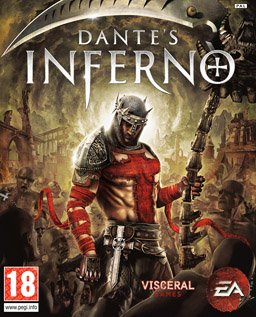 If you’ve played God of War, you’ve played Dante’s Inferno. The combat controls are nearly identical (quick attacks, power attacks, magic, quick-time events, and dodging) and the details are eerily similar. Dante climbs walls like Kratos, and even slowly drains fountains for health in the same way that Kratos slowly opens treasure chest Dante even shares Kratos’ love of self-mutilation, stitching a cross to his bare chest before beginning his descent into the underworld.

Yet despite the imitation (and perhaps because of it), Dante’s Inferno is spectacularly fun, and an early candidate for Game of the Year. Visceral Games, the developers of Dante’s Inferno, have clearly been paying attention, and have taken the best elements of an existing game in order to make a new one. Seeing the results, it’s hard to blame them. The wheel already exists, so Dante’s Inferno doesn’t concern itself with reinvention. Rather, it focuses on doing what it does well, and delivers a great action experience in the proces

It helps that Dante’s Inferno has the credentials to stand apart as its own game. First impressions naturally recall its predecessor, but after a few hours, it stops feeling like God of War and starts feeling like Dante’s Inferno. Once you get beyond the surface presentation, there’s a unique game with surprising depth and some truly excellent design decision

At least on paper, the game is based on the first part of Dante Alighieri’s Divine Comedy. Like the epic poem, Dante’s Inferno chronicles Dante’s literal journey through Hell, although that’s about where the similarities end. While the original Divine Comedy served as a Christian allegory, Dante’s Inferno gives Dante wholly personal motivation Returning from the Crusades to find his beloved wife Beatrice murdered, Dante embarks upon a lover’s quest to save her from eternal damnation. The poem inspires the level design, and many quotes are peppered throughout the game, but literary purists who hope for a faithful adaptation will probably be bitterly disappointed.

Gamers, meanwhile, will be ecstatic. Dante’s Inferno is the first blockbuster game to successfully communicate real moral tension. As Dante progresses through the nine circles of Hell, he is repeatedly forced to confront his own sins and immorality. The cut scenes and voice acting do a good job of creating a genuine sense of inner turmoil, as he wonders whether or not he belongs amongst the souls he judge

The game play complements the ambiguous narrative. Throughout the game, Dante will come into contact with various damned souls (early examples include Pontius Pilate and Orpheus) and you’ll be given the option to either punish them or absolve them. Punishing souls unlocks new Unholy powers, while absolving souls unlocks new Holy power

Most Games that feature a light side/dark side approach to character leveling don’t allow for much choice. Bioshock players could save or kill Little Girls, but a powerful character demanded an all-or-nothing investment right from the beginning. In Dante’s Inferno, there’s no penalty for playing a well-rounded character. Since players don’t have to worry (as much) about the effects that their choices will have on their character’s abilities, it enables more idiosyncratic decisions about who is worthy of absolution. Dante’s Inferno deserves credit for pulling off a balance that has eluded many other developer

Dante’s two main weapons are a scythe (unholy) and a cross (holy). The scythe has preposterously similar capabilities as Kratos’ blades-on-chains, but it is capable of tight, effective combo The cross is what really sets Dante’s Inferno apart, providing a mighy good array of ranged attacks that allow Dante to control crowds from a distance, while also remaining deadly at close range. Combat becomes a game of cat-and-mouse, ultimately turning Dante’s Inferno into a distinct battle experience.

The overall presentation of Dante’s Inferno holds up extremely well. The visuals aren’t revolutionary, but they are quite nicely detailed. The level design creates a tight sense of claustrophobia that seems appropriate for a journey through Hell. The game reveals much of the back-story through 2-D animated cut scenes that are both memorable and effective. The cartoonish simplicity provides a stark contrast from Dante’s more nuanced, three-dimensional adventures, and makes his sins all the more prominent.

Dante’s Inferno also has some truly fantastic monster design. Visceral Games have fully embraced the challenge of bringing every sin to life in a stunningly gruesome fashion. From the gluttons that spew acidic vomit and excrement, to the temptresses of lust that shoot tentacles out of their vaginas, it’s clear that somebody on the design team had some imaginative nightmares after watching Se7en.

Most of the extras are nice, even if they are fairly standard. There’s unlockable concept art, a Gates of Hell challenge mode, and a relic system that allows you to improve Dante’s skills in a variety of fun way The game is challenging, but not frustratingly so. Save points are generous, and you can change the difficulty setting at any time. The one unfortunate exception is the final boss fight. It’s an incredibly unforgiving battle that leaves a slightly sour aftertaste in an otherwise stellar game.

There are some other minor flaw The game starts recycling bad guys earlier than you’d like. Given how good the monsters are, it’d be nice to see more of them. And for a game that is based on one the world’s most famous narratives, the game is also strangely short on story. The ending makes no sense at all (there’s an obligatory “To Be Continued”), and it feels like the developers missed an opportunity to create a more intellectually challenging product. Dante’s Inferno is weighty for a video game, but that means that it has the moral complexity of a 9th grade classroom, at best.

Ultimately, the obvious God of War comparisons demand that originality points be deducted. Combined with its other flaws, the game doesn’t deserve a full five-star rating. Even so, Dante’s Inferno is still one of the best action Games we’ve seen in a while.  You won’t regret picking this one up.

Dante’s Inferno is still one of the best action Games we’ve seen in a while. You won’t regret picking this one up.
REVIEW SCORE
8
File Under: Action, Adventure, Electronic Arts, Microsoft