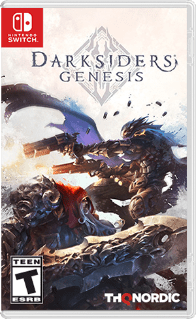 I remember when the first Darksiders released back in 2010. A friend of mine had described it as an “Zelda for grown-ups.” I remember how it dawned on me then how there really weren’t any other games like The Legend of Zelda on major consoles, and how silly that seemed since Nintendo couldn’t own gameplay.

Since then we’ve seen the Darksiders series attempt to add to, or mix up its take on the “Zelda formula,” to varying degrees of success. The latest entry, Darksiders Genesis tries to take the venture deep into Diablo territory, and I can’t help but feel like maybe it should’ve stayed in Zelda town.

Set before the events of the original Darksiders: Genesis follows the two Horsemen of the Apocalypse: War and Strife, as they are tasked by the Council to stop Lucifer from upsetting the Balance by granting power to Master Demons throughout Hell. It’s not a terrible story, as far as Darksiders lore goes, but it isn’t exactly thrilling. That may be from the overall lack of presentation; almost all story is delivered through dialogue or narration, be it between characters or in the “cutscenes,” that are mostly barely moving drawings.

But the story mainly exists to facilitate the gameplay; to keep players moving from one location to the next, and slashing away at demons. And I’ve gotta say, it’s really not as fun as I hoped it would be. As I mentioned, Darksiders Genesis draws a lot from Diablo and other looter games of its ilk, right down to isometric viewpoint. However, Genesis also feels like it’s trying to keep the series’ other elements, such as combat and platforming intact, and never really nails one idea, instead feeling like an amalgam of half-baked ones.

For me, this was most apparent in the combat. While Darksiders Genesis is intended to be a co-op game; it can also be played solo, with players swapping between War and Strife on the fly. There are some minor differences between the two Horsemen, as Strife is a bit quicker and is given guns; whereas War is a bit bulkier, and each Horseman is given different abilities and equippable sub-weapons.

Initially, it feels as though Genesis is trying to maintain the series’ fast-paced, Devil May Cry style combat, particularly with Strife as you combine sword slashes with gunplay. However, there really isn’t that much depth to the combat, and your attacks never feel like they have any weight behind them, even when playing as War. Attacks never seem to stagger enemies, and even when adding sub-weapons and abilities into the mix, fighting both standard enemies and bosses always feels like you’re just going through the motions, mashing away and it’s never really satisfying.

Furthermore, platforming can be a real hassle as the game’s isometric viewpoint, combined with layered and textured environments makes judging distance between platforms, or jumping onto ledges or poles a bit dicey; and trying to make precise jumps more often than not results in a plummet.

Finally, we come to Darksiders Genesis’ minor RPG elements. Throughout the game, enemies will drop “Cores,” which can be placed in an ability tree that offers benefits to both Horsemen. Different monster Cores provide different buffs or passive abilities, and by linking several of the same cores, players can increase the bonuses given. Aside from this, players can collect Souls–which has always been Darksiders’ form of currency– and “Boatman Coins” to purchase combat abilities or other passive upgrades. This is about as deep as the RPG elements get in this game.

Darksiders Genesis also suffers from some minor performance issues. While not completely game-breaking, they demonstrate an overall lack of polish and add to the frustration. The aforementioned layered environments can often lead to moments where jumping on uneven surfaces can leave you sick in the falling animation, or can get you stuck in certain cracks while attempting to dash. The game can get a little laggy at times when there are multiple enemies on screen, particularly during the online, leading to several instances where finisher animations play out to phantom enemies.

There is a pretty marginal amount of fun to be had with Darksiders Genesis, depending on how much value you get from literal mindless fun. But it’s so basic, plays to none of the series’ strengths that it ends up being completely forgettable. I cannot, for the life of me, understand why this game seemingly borrowed only the visual aesthetic of Diablo and nothing else. The combat has no depth of strategy, the RPG elements are minimal, and there’s not really any loot to be got. Even on the Switch, it’s not really worth it as a simple co-op hack n’ slasher, since it requires full controller support for its twin-stick gameplay, so convenient drop-in-and-play is out the window.

It’s hard to be too mad at it, considering it’s a spin-off—although at $39.99 it’s not exactly worth your money either. If THQ really wanted to try something new for the series, while maintaining a similar aesthetic, they should’ve leaned more into the game’s Zelda influence and made a proper dungeon crawler like A Link to the Past or other classic Zelda games. As it stands, Darksiders Genesis is a mediocre attempt at Diablo, released on systems where Diablo III is still available to purchase.