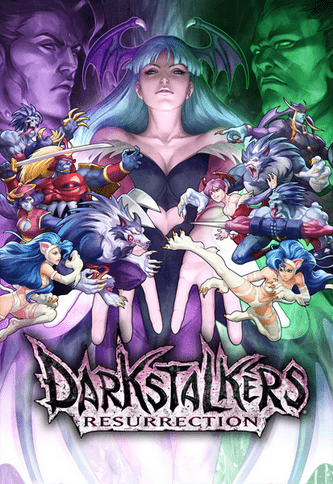 DarkStalkers Resurrection is a competent re-release and upgrade to a storied, and somewhat neglected franchise. The only real let-down is the lack of the sheer shine of a new title – but, the wait for fans is over, in some sense of the word. It may be something we’ve played upwards of 15 years ago – but for Morrigan junkies, it’s better than nothing.

Street Fighter , with its ‘more’ realistic take on fighting, has taken centre stage in the last couple years as part of the fighting game resurgence, leaving the the Darkstalkers in the, well. dark. Resurrection brings the folklore and horror crew back, and with its tongue firmly planted in its cheek, continues to deliver what has made it such a popular addition to the Capcom fighting game roster. This edition is a frame-for-frame remake of Night Warriors: Darkstalkers’ Revenge and the much improved Darkstalkers 3, modernized with new tutorials and training mode sessions that help ease players into the nuanced nature of fighting games. Modes are presented to not only help you learn how to do things, but why to do things. It may seem subtle, but the more you tumble down the rabbit hole of fighting games – the more it will help you in the long run. Aside getting the Iron Galaxy treatment, similar to the previously released Street Fighter 3: Third Strike Online, these two games are entirely untouched. I liked them before, and I still do, so that’s as shining as an endorsement I can give a fundamentally untouched game from over a decade ago.

In addition to the true-to-arcade gameplay, all the typical present day fighting game fixings are in full effect. Things like latency optimized net-code care of GGPO, lobbies, tournament modes, and replays are all commonplace now – but Resurrection pushes the fighting game formula just that little bit more with social media sharing integration via YouTube. All of this is part of a long history of one-upmanship in fighting games where developers are continually improving the infrastructure of these games outside of the core gameplay. It’s impressive to see how far these games have come, and for now Resurrection is leading the pack – which is only to the benefit of players.

Darkstalkers has a passionate following, and this would be perfect for fans who haven’t played these games – it would be an absolute hit. But fans have played these games, and people want to know when Capcom will stop just treading water with the franchise and release a full sequel. A more shrewd reviewer would probably say that Darkstalkers Resurrection is just a prelude to that full-fledged Darkstalkers sequel, and all it is hinging on is consumer dollar-voting. If Resurrection is just Capcom’s way of testing the waters to see if we’ll bite – then you’ll not only be getting two great classic fighting games, but also be dropping a few more dollars into the Darkstalkers 4 jar at Capcom head office.

And that might actually be a whole lot more important.

Darkstalkers has a passionate following, and this would be perfect for fans who haven't played these games - it would be an absolute hit.
REVIEW SCORE
7
File Under: Capcom, fighting game, Street Fighter