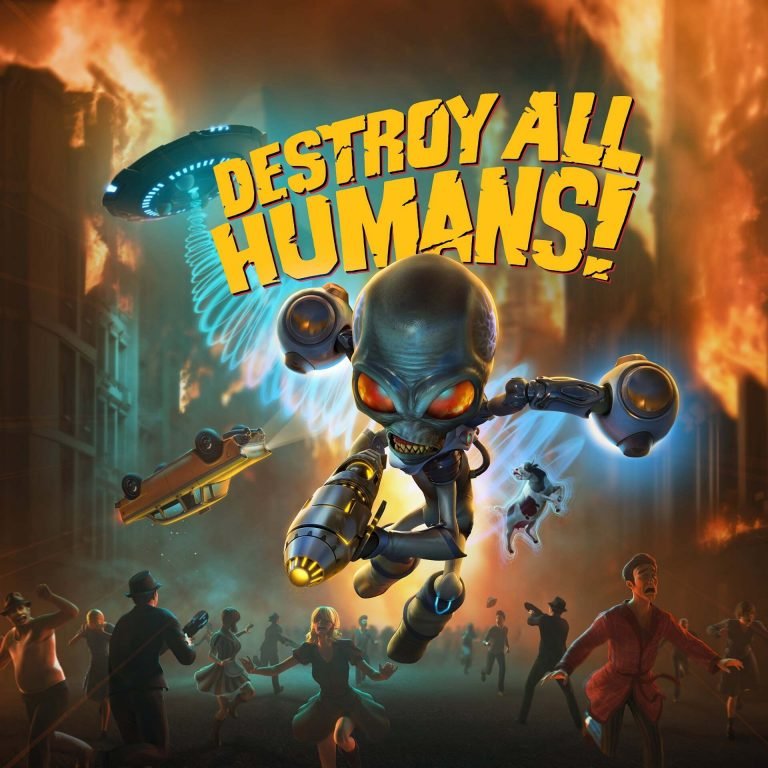 When I first booted up Destroy All Humans! in 2020, what struck me first was a disclaimer for the game’s own subject matter.

It simply read “while the experience has been upgraded, the content and historical record of the original invasion of the Furons remains a near-identical clone! The story, words and images contained within may be shocking to the modern brain!”

But it’s also one of the remaster’s best features as it revisits 2005 – which doesn’t seem too far off from the good old PlayStation 2 days. By acknowledging the game’s Roswell-style tones and over-the-top 1950’s setting, THQ Nordic and Black Forest Games were able to give themselves a mission statement and succeed in reviving Destroy All Humans! to new audiences. Veterans might find the remake more comfortable with its controls, while the never-ending jokes only get more absurd with age.

The original Destroy All Humans! was introduced as a game that poked fun at the extraterrestrial genre. It also offered a somewhat definitive space invaders experience with third-person action adventure. Going incredibly faithful to its 15-year-old source material, players become typical, trigger-happy grey alien Crypto 137 as he lands on Earth to rescue captured brother Crypto 136. As a member of the Furon Empire, Crypto is also on a mission to study humans, who contain a key to saving their species.

But the wild goose chase only gets funnier with timing. Players in 2020 are thrown into the political climate of 1950’s America, as the country is being invaded by aliens during an era of post-WW2 national security. The remake sticks to the original game’s plot without correctness, giving Crypto and his mission support Pox shameless banter over the human race’s weirdness. I got the most chuckles during its opening, while the crude humor somewhat waters down with repeated NPC talk.

But Destroy All Humans! is a funnier game when players try to study humans, bringing out a self-aware brand of humor. From soldiers confused about the colour of their uniforms to German scientists talking about ice cream chemicals, the game does a great job of immersing players into a caricature of simpler times. As more millennials (including me) tuck in our curiosity with Stranger Things and Black Ops, Destroy All Humans! feels like the latest scratch to our nostalgic itch – and boy does it feel nice.

Its worth noting Destroy All Humans! was created before games took on a cinematic and story-driven approach. This makes it easy for 2020 players to notice the remake’s emphasis on gameplay over narrative. Its dated structure means missions are self-contained without much of a purpose. This creates a somewhat disjointed story that is carried with fun factor. I would have loved to see developers add in some additional scenes to make the scenes “stick,” in a technique similar to Modern Warfare 2 Remastered where brand new scenes found ways to surprise returning players.

There’s just enough level variety to keep the game from getting too repetitive. Destroy All Humans! switches its objective types with every new level, requiring players to either let their trigger fingers fly, disguise as a human official for funny public speeches or infiltrating military bases to destabilize Earth’s defenses. Each are fun in their own way, but players can also be thrown off by the ever changing play styles. Some missions also vary from 30 minutes to just five minutes due to the game’s standalone narrative.

Invasion of the Texture Snatchers

As a remaster, the game is nearly unrecognizable from its 2005 version (in all the right ways). The original game’s muddled visuals are given a new life on current generation systems. Environments like the game’s opening farmland are given falling leaves and sun rays that make surroundings deeper than before. Santa Modesta, Area 42 and the game’s larger Capitol City are more populated with NPCs. From drive-in theaters, to diners and fun fairs, the over-the-top atomic-era colour palette even looks better through current console power. Its pre-rendered cutscenes are a thing of the past, as the remake renders everything in-engine to show off some crisp details.

Black Forest and THQ have taken their time in properly separating advanced Furon technology from humans, making Crypto seem more like a believable threat. This translates into Destroy All Humans‘ on-foot and UFO gameplay, which have been way easier in 2020.

“And I’m all out of bubblegum.”

Besides scaring humans on sight, Crypto can also vaporize everyone on sight. The third-person gameplay still works in simple run-and-gun fashion, while a lock-on feature snaps responsively with U.S. soldiers and Men-in-Black Majestic agents. Players also get special psychic abilities to levitate enemies and send projectiles back. Crypto even has a jetpack which can help players travel to vantage points and temporarily stay suspended for shooting mid-air. Like the 2005 version, Destroy All Humans! keeps the fun combat intact with a few improvements.

This time, Black Forest has kept every action in one-button (finally). Where 2005 players had to hold L1 and press a combo of buttons, 2020 players have it all mapped to one. This makes Destroy All Humans! much more tactile during massive firefights with enemies and even lets players chain different attacks quicker for seamless carnage.

The tweaked controls also make Destroy All Humans! more fun to play stealthily. Crypto can use the HoloBob to disguise himself with any NPC. In one button, players can easily remember how to switch characters and recharge their HoloBob easier. Players from the new Hitman games can also find the stealth mechanics familiar and disguises can be a smarter way to infiltrate bases. The remake even shows disguises draining over time – a new visual that helps for one-detection-fail missions.

My only gripe about this is constantly reading minds to keep the HoloBob going. You’ll be subjecting yourself to repetitive NPC dialogue, which definitely could have had more variety given the 15-year gap. Yes, I know a solider is sick of guard duty, because I heard him say it 100 times across the game. Now imagine that repetition duplicating over the same NPCs scattered across Destroy All Humans‘ six locations.

It’s a bird! It’s a plane! They got vaporized by that UFO?

At the end of some missions, players also get to fly the Saucer. Packed with beefier weapons in the remaster, it’s incredibly satisfying using the UFO to destroy towns. Destroy All Humans! tries to make meager stealth missions pay off by destroying the entire map, and it somewhat works. Players also get a variety of ammo types for the UFO, though ammo quickly runs out fast without upgrades.

The Saucer can also replenish health through siphoning vehicles and tanks. It’s something players will have to keep doing across the remake’s surprisingly challenging UFO segments. But destroying buildings with a Death Ray and watching them explode Independence Day-style will never get old.

Unfortunately, Destroy All Humans! falls short of a perfect remaster. Some of these come from the mistakes made by its 2005 version. Textures on NPCs and environments can take a while to load, resulting in pop-ins during cutscenes. The remastered game’s massive one-alien battles add stress over consoles, causing drops below 30 fps. Over PC, players can experience the remake in 60fps while consoles stay limited to the menu for smooth visuals.

Without a proper difficulty setting, Destroy All Humans! still keeps some frustrating sections that take some groans to overcome. While boss battles are a worthy challenge, other meager missions like escorting a nuke and clearing a path were one of the worst experiences in the game. For some reason, the game takes some of the stress away from players with easier missions after intense ones. This can feel like an unbalanced experience that was left unchecked when Pandemic Studios first worked on the game 15 years ago.

Destroy All Humans! adds more replay value this time around, through additional challenges in missions. These small extra objectives vary from flying a saucer through giant donuts, to throwing zombie cows at soldiers. It’s worth playing through the game’s short ten hour story to create these hilarious moments along the quest for 100%. The game also puts players in six open world spots around America. But since players are revisiting the locations on missions, the maps can easily dry up in variety by the end of the game. It slightly makes up for this by adding race challenges and just good-old fashion free roam destruction.

Players will start and end their missions at the Furon Mothership – a hub that’s also been renovated for easier mission and upgrade picking. The map is much simpler to browse locations over, while a separate menu is reserved for replaying any of your favourite story missions. Of course, Pox is also the source for Crypto’s upgrades – many of which have their own trees. From buying your way to a Rapid-Fire Disintegrator to an infinite hoverboard, the game’s best mechanics lie within its unlockables. These can even change the way levels are played, adding more reason to revisit Destroy All Humans! more than once.

Destroy All Humans! brings the series back to its paranormal ways with a much-needed remaster that stays relevant through a fresh coat of space metal. Its jokes, though overly crude, keep new and familiar players invested under a refreshing spin on the alien invasion genre. Black Forest and THQ Nordic have clearly listened closely to deliver a much more polished experience 15 years later.

Destroy All Humans! keeps the best parts of its 2005 game in mind while rebooting the series with a short, but engaging story and addictive alien destruction.
REVIEW SCORE
8
File Under: 2020, Remake, THQ Nordic