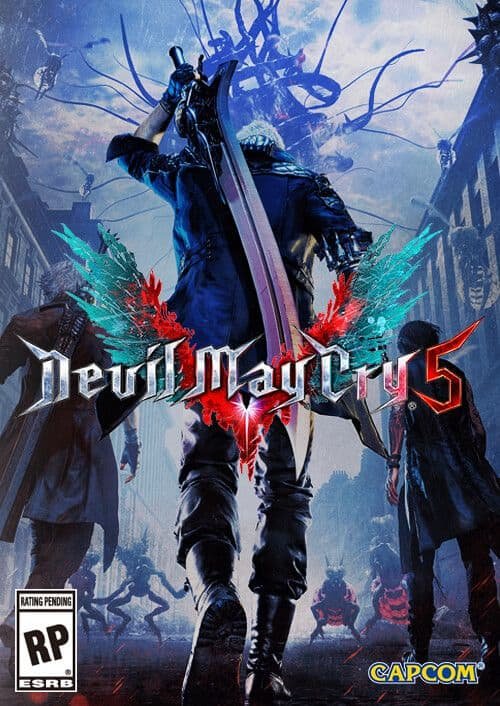 Devil May Cry 5 seems to have learned nothing from all the other games that have been rapidly expanding and revitalizing the action genre. In a post Bayonetta world, Devil May Cry 5 had a lot to prove to assert itself as a relevant mainstay against its contemporaries, but what’s here feels like a snapshot of when the series was unrivalled in skillful, stylish combat, entertaining set pieces, and a main character that upheld an icon status even when his series was in stasis.

Some of Devil May Cry 5’s biggest problems start because its refusal to use said main character. Dante, (the original, not the younger, black-haired version in Ninja Theory’s 2013 reboot) having not been the primary playable character since 2005’s Devil May Cry 3: Dante’s Awakening, takes a back seat once again to Nero, the younger, spunkier of the two demon hunters who debuted in Devil May Cry 4. Unlike previous games, by the time DMC5 starts the cataclysmic event that is spawning demons and devils into the real world has already begun, and Nero, whose role in a lot of the story is tangential at best, felt like an outsider of a larger story I had to spend much of the game without any real context or motivation. Devil May Cry hasn’t always had the most consistent stories, but its always been good about grounding character motivations in the midst of the chaos. DMC5’s story, on the other hand, is split between three perspectives, and the nonlinear execution of its story makes it feel fractured, and harder to follow and invest in, even as a person who has grown to care about these characters across five games.

This fractured state extends to the writing, as DMC5 feels caught between two versions of itself, one side that leans into the gothic and darker vibe of the original games and the edge load, angsty side of the reboot. Nero in particular channels reboot Dante’s insufferable attitude at several points, which again makes me wonder why the game leans so hard into him as the primary playable character.

But Dante and Nero aren’t the only ones here. Lady and Trish return, and watching these two women, who have been typically portrayed as just as capable and powerful as the men of these games, relegated to damsels in distress with zero agency of their own or chances to shine is more than disappointing, it feels disrespectful. This is especially apparent when, around the midpoint of the game, DMC5 sexualizes both characters in consensually problematic ways.

While she’s not treated the same degrading way, newcomer Nico doesn’t fair much better. Somehow, Nero’s craftswoman partner is one of the primary perpetrators of some of DMC5’s worst tendencies. This includes the objectification of Lady in one instance, and near the end, undermines an entire thesis of Nero’s character to double down on some old fashion toxic masculinity. While Nico is framed as the comic relief, none of her lines and interactions come off clever enough to make her anything less than grating.

Rounding out the cast is the third playable character named V. This enigmatic wizard, whose appearance and motivations aren’t explained until much later in the game than they should have been, spends a lot of the game speaking in vague riddles and poetry, and doesn’t get interesting until the second half. I found his presence burdensome for the early hours, as it felt like he was crashing a party with no known motivation. He definitely improved and grew on me as the story went on, but that it took as long as it did just speaks to DMC5’s messy structure.

Despite the new characters, much of DMC5’s story retreads old, proven material. Long time fans will be interested in the closure it provides to some threads dating back to the first game, but even as I found myself drawn in by the end, I was still disappointed at just how safe it all felt.

That sense of safety bleeds into the way DMC5 plays as well. Both Nero and Dante’s play styles draw heavily from DMC4 and DMC3 respectively, so much so that I found my muscle memory kicking in on several occasions, despite not having played either game in over a decade. Between the two, Dante fairs better, mostly due to the variety of his moveset. He’s the character who I could experiment with the most, with four fighting styles to swap between on the fly and multiple short and long-ranged weapons, every moment I played as Dante felt like it could be different from the last. Some of his tools were outlandish and a ton of fun, including a motorcycle that separated into dual wielded melee weapons, but unfortunately, I wasn’t able to play as Dante anywhere near as much as I want. Clearly a lot of work went into Dante’s ability set, but it feels so underutilized compared to the other two that it doesn’t color the game as a whole.

Nero, on the other hand, is the star of close to half of DMC5’s 20 levels. On paper, his arsenal may appear to be more varied than I’m giving it credit for, but in practice, I felt none of the customization options changed the core of how Nero plays, and it made his levels a slog to get through. Unlike Dante, Nero only has one sword and one gun to mess around with. A revolver, which never felt like it did enough damage to be worthwhile, and a sword that plays very similar to Dante’s primary one. These on their own make a serviceable if by modern standards unremarkable, hack-n-slash that makes up most of DMC5. The variety and distinguishing factor of Nero’s style come in the form of the Devil Breaker, his mechanical arm.

The primary function of the Devil Breaker is to pull enemies to you, which was helpful without Dante’s dashes to make maneuvering around the environment more simple. Courtesy of Nico, there are several variations of the Devil Breaker to choose from, each with their own additional abilities and properties to shake things up. But in all my time using different ones, I never found much use for any of them beyond using their distinct moves to add up to style points that begin to stagnate should you rely on the same moves repeatedly. None of them broke up the monotony of Nero’s play style, and that monotony wasn’t helped by DMC5’s relatively uninspired enemies and encounters. To this day I still remember some of the fights of DMC3 and how satisfying they could be, especially with that game’s unrelenting difficulty. Here, most of what DMC5 offers feels so toss away that almost none of these fights left an impression on me. Most certainly nothing I’ll remember years from now.

DMC5’s one saving grace when it comes to interesting combat design is V, who plays, unlike anything the series has done before. Unlike Nero and Dante, who are powerhouses of human-demon hybrids, V is a frail man who walks around with a cane. Instead of doing the fighting himself, V has to rely on three demons he is able to summon: a bird, a panther, and a giant. Each of these three deals damage and combos similar to Dante and Nero’s, but they do it at a distance from V himself and can be taken out by enemy attacks just like any other character. While they’re able to dish out damage, they’re also part of V’s dodging and navigating abilities, so if they’re recovering from damage, V will be unable to efficiently avoid enemy attacks. V’s entire set up is meant to keep him from danger, but even so, he has to deal the final blow to every enemy he comes across. Managing all these characters at once captured my interest in V at the outset, and any time I was given the option to play as him over Nero I took it. It may have felt antithetical to a lot DMC’s known conventions, but it brought a new layer of challenge and strategy I wasn’t getting anywhere else in DMC5.

While its narrative is messy, its characters are given some of their weakest and most well-worn material to work with, and only one of its three playable characters brings anything new to the table, I have a hard time saying DMC5 is bad. It’s just unexceptional in the face of games that have revitalized a genre as recently as the past two years. God of War, Bayonetta 2, and Nier: Automata all stand out as stellar, modern examples of what the action genre is capable of, where Devil May Cry 5 feels like a relic of a time when it was nearly uncontested in that space. There’s clearly a passion for this series instilled in DMC5, but it feels like all it amounts to is reminiscing about its past than paving the way for a brighter future.

Devil May Cry 5’s risk-averse approach grounds it as other games in the genre are reaching for the sky.
REVIEW SCORE
6
File Under: