Crossing the ‘T’s and Gouging the ‘I’s 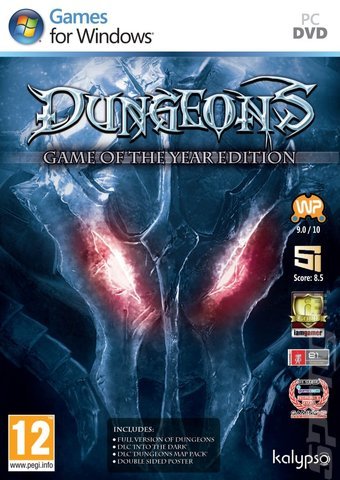 When evil young girls and boys sit down to begin planning their schemes, it isn’t likely that they’re thinking about the paperwork involved. No, they’re probably rubbing their hands together manically and cackling about the sheer despair and terror they’ll cause, colourful visions of skulls, lava and hellish minions running rampant through their imagination.

This is why it’s so interesting that games that focus on being evil by micromanaging the macabre can be so fun. But it’s a delicate balance. If the tasks that make up the overall, role-playing impression become too routine — too dedicated to minutiae — then the sense of immersion can crack and become little more than a gussied-up version of plugging data into a spreadsheet. This is unfortunately the ultimate effect of Dungeons, Realmforge Studios’ new strategy/sim title.

The story begins by introducing the Dungeon Lord — a mute, menacing villain in garish armour — just as his girlfriend stages a coup that takes his throne away from him. Of course, the Dungeon Lord sets about getting back what belongs to him by conquering the surrounding region until he’s powerful enough to take down his ex and reclaim his throne.

Dungeons is centred around a snowballing resource collection mechanic. As the Dungeon Lord you upgrade your lair while patrolling its halls and collecting the souls of the heroes that perish within. You’re able to purchase new traps, monster spawn points and other evil accruements by keeping a healthy level of souls on hand. The way you gain this resource is through the death of heroes and the gold mined by goblins as they mine new tunnels and rooms.

The heroes that enter your dungeon have unique interests that they need to fulfil if their soul metre is to fill up completely (as represented by a green bar underneath their health). Some heroes are into treasure, some into reading and all usually fall on one side or the other of a sado-masochistic desire to either take or receive damage from your monsters. Your task, as the Dungeon Lord, is to give these heroes what they want, baiting them to follow set paths throughout your dungeon and find the treasure, libraries and enemies they need to enjoy themselves and, consequently, fill up their soul metre. That’s when you rush in, striking them down when they’re at their happiest. Their death (or imprisonment in prison cells you’ve built) gives you the souls you need to increase your prestige (another resource necessary for dungeon decorations, etc.) and dungeon effectiveness.

In this way, Dungeons is not unlike any of the Tycoon series of sim games; less an experience of making your perfect evil lair than it is about managing a series of “attractions” that ultimately provide the kind of profit necessary for creating ever more elaborate set-ups. This is combined with a style of play that channels the “tower defence” genre. Heroes will try to take down your Dungeonheart — leading to a mission failure — if you don’t keep them happy, so your task is always to place enough bait to distract them from foiling your plans.

A levelling system is also in place wherein skill points are gained for the Dungeon Lord by fulfilling various tasks within each scenario. Finish a mission without, say, dying once and you’re rewarded with a handful of points to put into increasing the Dungeon Lord’s spell list, passive stats (health, intelligence, strength, etc.) or dungeon control (less expensive items, more powerful monsters and more). This RPG-style levelling provides an added level of substance to an already deep system.

A Dungeon with a Cruel Overseer

The learning curve of the first levels is Mt. Everest steep but Dungeons attempts to supply you with an adequate Sherpa through the (aptly named) Mr. Sidekick, a peg-legged goblin with a voice straight out of a Tales From the Crypt cartoon short. His role is to explain mechanics and shout out critical mission updates. However, it’s trial and error, more than Mr. Sidekick, that provides the best results. Players can expect to spend the first handful of missions fumbling their way through a fairly cumbersome user interface that tutorials haven’t quite prepared them for handling.

There’s a strange, somewhat hypnotic pace to Dungeons that doesn’t become quite apparent until the rhythm of building, exploring and defending has reached its zenith in each level. Once the player has gained a firm understanding of the game mechanics, understood what is required of him or her in a scenario and begun to build their dungeon appropriately, the management and upkeep of a given level takes on a naturally engrossing pacing. Unfortunately, just as often as Dungeons keeps itself humming along at a good, progressive speed, it equally finds itself grinding to a halt.

The game has a tendency to require extremely specific approaches to the problems presented in a given level. One example: heroes are coming in to decimate your Dungeonheart and, unless you find the perfect balance of mining their maxed-out soul metres and killing them before they have a chance to start breaking the scenery, your carefully exacted dungeon quickly falls apart like a house of cards.

Because of the high level of difficulty (even on the easiest setting) of levels like this, Dungeons can sometimes turn itself into a rote exercise in mathematics — failing to abstract the underlying gears and cogs of the sim or strategy genres and revealing itself to be, well, a computer game that is determined by which set of numbers (yours or the CPU’s) beat out the other. In the level mentioned above, creativity leads to failure and only a trial and error approach that eventually forces the player into setting up the “right dungeon” will allow for victory.

Dungeons’ presentation is good but not great. Its visuals are workmanlike — never pretty or unique enough to create a truly compelling aesthetic but never ugly enough to outright turn the player off of the game. The sound is much the same. Initial loading screens promise a soundtrack full of adventurous, slightly macabre melodies but, once the game itself begins, the music retreats to the background to be replaced by atrocious voice acting (with the exception of Mr. Sidekick’s cackling) and serviceable sound effects. Its sense of humour — surely aimed at blending the tongue-in-cheek political commentary of a title like Tropico with the cynicism of its Dungeon Keeper (or even Overlord) forbearers — likewise falls flat and only serves to exacerbate these issues.

Ultimately, Dungeons feels a lot like a beta version of a game that still needs a bit more time in the development oven. More effective difficulty tweaks, a bit more mission variety and the addition of online competitive play (missions that see you facing off against a rival Dungeon Lord are practically begging to be translated to multiplayer modes) would have made it easier to forgive some poor design choices. As it is, Dungeons is a difficult title to recommend. Some will latch onto it and find much to love in the unique gameplay mechanics. Most others will come away wishing that the spirit of freedom and play that appeals to the evil overlord in all of us was better captured by this particular dungeon.

Ultimately, Dungeons feels a lot like a beta version of a game that still needs a bit more time in the development oven.
REVIEW SCORE
6
File Under: Adventure, Dungeons & Dragons, Multiplayer, PC