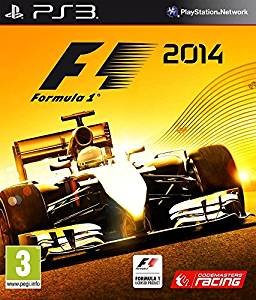 F1 2014 marks the return of officially licenced F1 themed racing simulators to Canada. For reasons I still can’t figure out (and according to the front line employees of the various big box and specialty stores that I visited last year), F1 2013 only made it to our nation’s border but never passed it. Obviously it would have been easy to get a copy of F1 2013 if you truly wanted one. A quick Amazon order would have resulted in the game showing up a week later, but it’s at least believed that some games are still purchased by people wandering into a store and looking for something new on a shelf. This is why EA Sports and 2K Sports still pay professional athletes to appear on their covers, and sadly these spontaneously purchasing crowds have not seen any new F1 games since 2012. Luckily F1 2014 is already in stores for anyone looking to log laps like Lewis Hamilton.

Now before you dust off that old Kool and the Gang record that has Celebration on both sides (because it’s Kool and the Gang after all) let’s get one thing straight. There is very little to actually get excited about when it comes to F1 2014. I don’t mean to say that it is a bad game, but instead it’s kind of like Kristen Stewart of the Twilight movies. Put her into the correct situation and the result will at least be profitable; however, if you stare long enough you begin to feel like there is nothing new happening below the surface.

It’s the same case with F1 2014, which feels so much like F1 2012 that I can start to understand why the 2013 version never came out here. To be fair, the 2014 version is not an exact clone of the previous years, but nearly all the major changes are a result of rule, team, or schedule changes made for the actual 2014 F1 season. For example, all of the 2014 paint schemes, that did not need to be censored due to various sponsorship and rating board rules, made it into the final product. The Sochi, Russia track that went from Olympic venue to F1 circuit is in this game because it was a location in the 2014 F1 schedule. The kinetic energy recovery system, known as KERS in F1 vernacular, has been replaced by the heat-based energy recovery system (ERS) that the actual F1 cars are now using, and in F1 2014 there is no button to use it since it is automatic. The Young Drivers Test was also replaced with a general evaluation that automatically selects the level of difficulty for you. They even added an option to change the length of a season from the full schedule down to 7 races. Unfortunately, as I already stated, all of these changes are minor and do little to differentiate F1 2014 from the previous versions.

Originally, I was also going to say that the Scenario Mode, a mode that provides you with unique situations that the game asks you to overcome, was this year’s big new addition; however, I discovered that it is only new to people who missed last year’s F1 2013.

Now the one thing that I hope to get through to anyone reading this is that lacking something exciting is not the same as being a low quality product. F1 2014 is a high quality game with car controls that feel highly responsive. The tracks are very detailed and accurate when compared to their real world counter-parts. The A.I. is more than competent at what it does. On top of that, becoming a virtual F1 driver will take a lot of practice, but the game never feels like it is punishing you while you’re still getting your feet under you. It helps that you can adjust the type and number of assists to the point where even a novice driver can get around the track with ease. F1 2014 is also a true simulation of Formula One racing. I could spend time giving you example after example, but the game goes so deep into simulating racing that the brakes of your car will be affected by the heat coming off of other cars on the track.

Personally, the reason I’ve always found to play an F1 game is the multiplayer. I would not call it exceptional, but it’s still extremely fun when you’re going up against human controlled vehicles that react unpredictably on the track.

If I was forced at gun point to complain about F1 2014, I would say that the game’s biggest problem is that it is not interested in inviting new gamers into the F1 world. The previously mentioned young driver test was designed to help improve the F1 videogame community, but it was replaced by an optional test that decides what skill level you will play at. The game offers no instructional videos or tutorial to explain what an F1 car is and how to drive it properly. The game doesn’t even do a good job at explaining what mechanics are given or taken away by increasing and decreasing your difficulty setting. I honestly learned more about F1 racing from that episode of Top Gear where former F1 star Jean Alesi brought a Lotus T125 for Jeremy Clarkson to try out.

In the end, F1 2014 is a perfectly fine game with game-play that has existed in the franchise for the past few years. Since it has been iterated on for those past few years, that core game-play is extremely solid. That said, there is nothing in this package to get excited about since it has been done before at this level of quality, and by the same company. Given the choice I would probably wait for F1 2015, which is rumoured to come out on the PS4 and Xbox One in early 2015. I really don’t know why the games will be out roughly 6 months apart, but it is the one piece of information that finally allows me to understand F1 2014. F1 2014 is a holding pattern (or contractual obligation) designed to hold people over until a PS4 or Xbox One version can be released in 2015.

It’s the same case with F1 2014, which feels so much like F1 2012 that I can start to understand why the 2013 version never came out here.
REVIEW SCORE
7
File Under: Codemasters, PlayStation, Simulation, Xbox