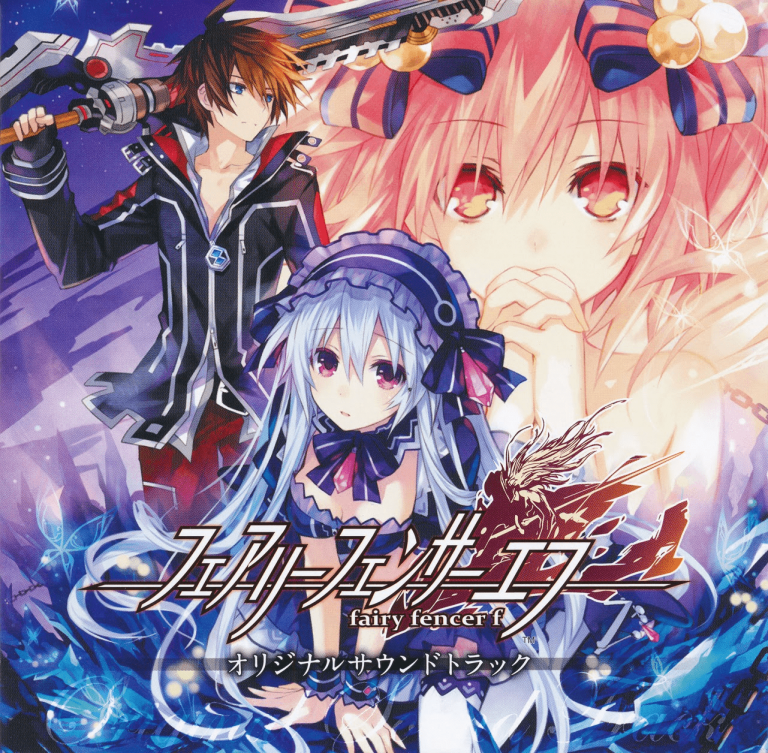 I tend to play games in long streaks, usually in windowed mode so I can “multi-task” (which pretty much means I pause playing to occasionally do something else before popping back in). Fairy Fencer F was one of those games where I would start playing, then look up and find that it was midnight and had to be up in eight hours. That’s a positive quality for me—I did enjoy the game, overall, though there are considerable flaws and issues that the game demonstrates, some of which bother me less than others.

I feel like this game’s plot is a deconstruction that forgets that part-way through. Early on, there’s a lot of blatant references to this being a game, and protagonist Fang’s nature as a version of the traditional brash JRPG protagonist (taken in the direction of just being utterly selfish and amoral rather than actually heroic). This kind of fades out as the story progresses, and while it maintains a tongue-in-cheek attitude, it continues to drop a lot of meta-humour. This is unfortunate, as the characters are mostly archetypes, ranging from the excited scientist girl to the strange mascot character. The universe seems largely an excuse, lacking in explanation, often with contrived reasons provided, and with a large plot line mostly abandoned halfway through. There are few twists in the plot of the revival of two opposed divine beings, and the transition from collecting Furies to confronting the main antagonists seems somewhat abrupt and lacks build-up, with a lot of telegraphed outcomes taking away from the plot’s impact.
The voice acting and writing is actually alright, though it can sometimes be hard to hear over the ambient soundtrack—when the latter doesn’t cut out when the voice-clips struggle to load. Many dramatic scenes lost their musical accompaniment, becoming silent, save for the voices. This is unfortunate, as the music is actually rather good. Nobuo Uematsu composed the score, and aside from the optional dungeon song that’s nearly identical to a My Chemical Romance track, it’s engaging and exciting. Some of the boss themes are quite fun, particularly for special bosses, with some taking a wonderful baroque theme.

Gameplay cutscenes incorporate character images with the almost-CG mobility seen in a lot of visual novel games, which actually doesn’t look too bad. Everything’s colourful, and the backgrounds are detailed. I couldn’t shake that I’d seen a lot of the character designs before, sporting a modern-fantasy style prevalent in lots of JRPGs. The main character looks too much like Kingdom Hearts‘ Sora, and there’s a girl who just looks like she walked out of Black Rock Shooter. It does have a significant amount of fanservice—pretty much every shot of Harley, the well-endowed scientist, zooms in on her chest. She takes off her clothing abruptly at one point for little reason. There are several other sexy scenes that just kind of happen, such as a hot springs scene. Most of them are pretty blatant and fairly cliche (obviously, sexy hot-springs. Clearly, tentacles). Nobody’s clothing is destroyed in a fight, and while there are alternate costumes for some characters, there’s never a point where you need them.

The actual gameplay, fortunately, was rather engaging. I used a keyboard to play this game, and had little trouble with the controls. The E, F, and Enter keys govern all three combo lines, and I managed to get used to the menu using only the keyboard fairly quickly. I especially liked the combo system and the battle layout, and completing sequences keyed to enemy weaknesses is satisfying, as is transforming into your techno-magic hybrid forms to do more damage.

Collecting the other Furies and their Fairy inhabitants also grants the ability to use them for stat boosts and passive abilities, represented in illustrated cards that display text boxes hinting at your current events. Their greatest use is for the ‘Godly Revival system’, where you use them to draw swords out of the bodies of a giant demon and a mythical goddess for stat boosts, and allows you to stab them into the world map to modify areas. I decided to focus on the demon, because I was tempted to call the game’s bluff and see if things weren’t quite so black-and-white (to little avail). I didn’t find all the optional things to truly complete the section, but I enjoyed drawing out the powers and playing with them.

The gameplay kept me involved, driving home through the 30+ hours I had. Parts of that was backtracking to levels to complete small quests by killing collections of enemies and collecting items, which largely started to feel like busywork. The game didn’t ever seem too hard beyond the first few optional bosses, though, and while I wasn’t suffering, I was largely untouchable throughout most of the game. Some fights would stop abruptly for cutscenes, but the actual fights rarely became devastating in the main game. There’s also reused assets in the dungeons and serious retreading of old areas that drains a lot of the fun. I will say that, while jumping is necessary to navigate, there’s only two instances where it’s required, and only one that ever frustrated me for a short time.

Overall, I’m of mixed feelings about this game. I stuck with it for the long-haul without feeling like it was chore, but there’s a whole new-game-plus section to the game I’ve not tried, and I’m not sure I want to see how it changes things, even though the Steam Achievements spoil some intriguing ideas. I might be content to leave it, as the issues it had failed to capture my heart, even with the charm it had.

Fairy Fencer F was one of those games where I would start playing, then look up and find that it was midnight and had to be up in eight hours.
REVIEW SCORE
6
File Under: Anime, Compile Heart, Idea Factory, PC, RPG