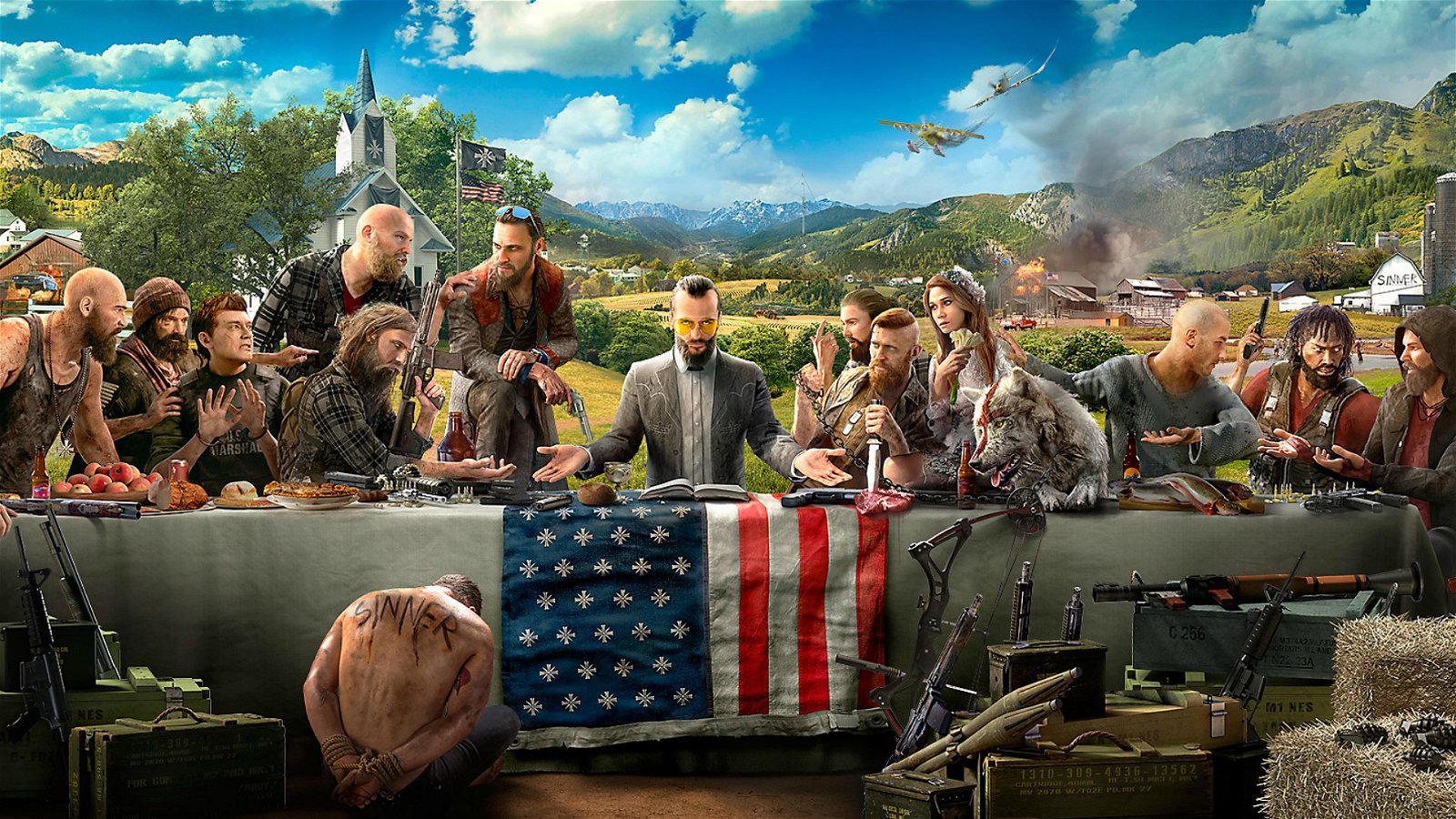 Far Cry used to be a game built on the idea that the player was a predator stalking its prey in a lush jungle. That is until the series redefined itself with its third entry. Far Cry 3 became an example of evolution in gaming, ditching its previous style of storytelling in exchange for throwing players face first into a world of mayhem and chaos that they couldn’t control or manipulate. Well now Ubisoft believes that the next step for Far Cry is to turn players into the maestro of an impending apocalypse with blue collar America serving as our virtual playground, and I couldn’t agree with them more. Welcome to the pleasant madness that is Far Cry 5.

Set in the fictional town of Hope County, Montana, Far Cry 5 opens with a squad of County Police and a U.S Marshall on their way to arrest the cult leader of The Project at Eden’s Gate, Joseph Seed. Referred to as “The Father” by his legion of devout followers, Joseph has sold them on his vision of a worldwide collapse and that he is the only Shepard that can lead them to safety. Joseph may be their messiah, but the rest of the Seed family are just as important in this operation. Brothers, John, Jacob, and sister Faith each represent a core piece of Joseph’s religious and militaristic power. Compared to the series’ previous antagonists of Vaas and Pagan Min, the Seed family are a unique breed of villain that I greatly enjoyed fighting against. They believe wholeheartedly that what they are doing is for the good of mankind and nothing will stop them from accomplishing their objective of saving their precious flock.

When the arrest attempt on Joseph goes south, Hope County goes dark, cut off from the outside world and any chance at external intervention. It’s up to the player to raise their own resistance in Far Cry 5 and challenge the Project at Eden’s Gate for control of the towns three central regions. As you chip away at the numerous activities and missions located in Holland Valley, Henbane River and the Whitetail Mountains, the resistance meter in these regions increases in levels until players reach a final confrontation with a member of the Seed family. The best part of this journey, however, is that it can be done in any order the player wishes. There are no longer any boundaries or sanctioned off zones, the entirety of the map is yours to explore the moment the player finishes the tutorial on Dutch’s Island.

Thankfully players don’t have to shoulder the weight of liberating Hope County all by themselves. As players make their way through the beautiful rural landscapes and rustic towns, they will begin to discover the numerous hopeful citizens looking to reclaim their lost homes from the cult and dish out some revenge. This highlight feature of Far Cry 5 is known as the For Hire system. By completing side missions for these eccentric characters, players can recruit them at any time to their side to help out with any objective they have in the open world. This is an amazing addition to the game that really puts you at the forefront of controlling the chaos and mayhem instead of simply being part of it. Having problems with vehicle attacks, call out Nick Rye to send a bombing raid their way in his family’s old plane. Can’t get enough information about the outpost your taking over, send out Boomer the dog to scout it out for you undetected. There are nine of these powerful specialists to recruit and each one adds another layer of strategy players will love to experiment with.

Far Cry 5 has also seen a wide amount of quality of life improvements that greatly improve the overall experience. The first being that exploration and fog of war are no longer tied down to climbing up tall puzzle towers. The map is now unveiled by simply walking around it and the player can search out for specific information, like the location of outposts and hunting spots, by talking to rescued hostages or the locals found at shops. This also results in the change of the perk system. By completing challenges with weapons and experimenting with the For Hire system, players rack up skill points they can cash in for health upgrades and new sets of skills tailored to different playstyles. These perks can also be carried over to the multiplayer portion of the game, Far Cry Arcade. Lastly, as is standard with any Far Cry game, the new sets of vehicles are loads of fun to play around with and the gunplay remains as slick as ever.

While it’s unfortunate we’ve reached a new industry standard of micro-transactions being implemented into single player games, thankfully Far Cry 5 isn’t ruined by them in the slightest. By purchasing silver bars using their platforms marketplace, players can acquire new cosmetics for their favourite weapons and vehicles. In some cases, these micro-transactions can serve as progress fasteners, but at least nothing is locked behind a paywall and everything is able to be purchased with the in-game currency as long as the player grinds enough by hunting animals and completing side missions.

What is disappointing however is the co-op features of Far Cry 5. Taking after the previous entries in the franchise, when a player joins in to help you with your game, only the host will actually retain the story progression and experience added to their resistance meter. The player who jumps into the session will only retain the character experience they’ve gathered by completing challenges and they are tethered to the host, unable to freely explore. It’s honestly a shame that this part of the game hasn’t improved more because this was the same reasons Far Cry 4 co-op was such a killjoy for me and my friend.

Far Cry Arcade may be the games core multiplayer experience, but at the time of writing this review, it’s hard to critique it for any positive or negatives because the mode needs a community behind it to showcase its potential. After playing around in team deathmatch and some co-op game modes made by the devs it was clear that the in-game editor is rich in assets and gives its creators an abundance of tools, but only a passionate player base is going to be able to supply this mode with worthwhile content to experience and that will take time to build.

Once I hit the credits, I took some time to reflect on my journey through Far Cry 5. In short, this game was a blast from start to finish, pulling me into the experience instantly with an Americana rich world full of memorable characters and built with a strong core of addictive first-person gameplay. While there was the occasional glitch to ruin the fun, they were few and far between. What I found particularly impressive though was that the game is superbly optimized, even running off a launch PlayStation 4, Far Cry 5 ran smooth and maintained a solid framerate throughout the most visually impressive parts of the experience. If you’re looking for a new place to call home for a while, you should definitely consider making a trip to Hope County.

Far Cry 5 was a blast from start to finish, pulling me into the experience instantly with an Americana rich world full of memorable characters and built with a strong core of addictive first-person gameplay 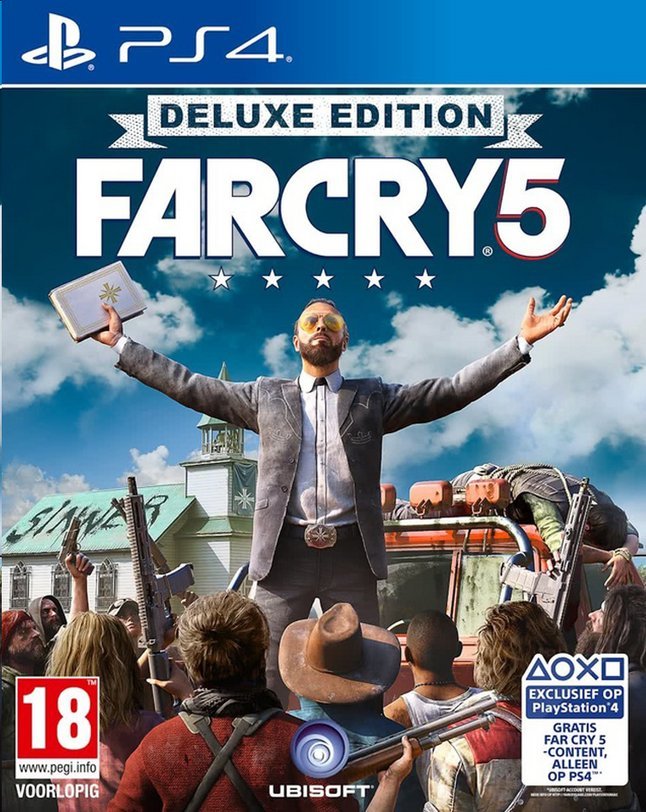