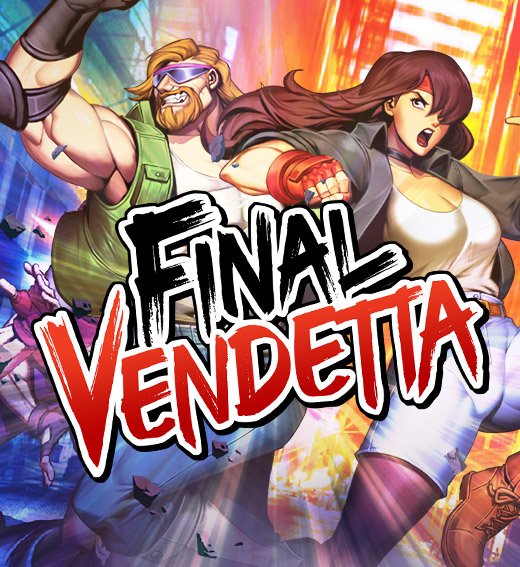 They say imitation is the greatest form of flattery, and Final Vendetta, the latest 16 and 32-bit-era-inspired arcade-style throwback from UK indie developer Bitmap Bureau has so much reverence for late 80s and early 90s coin-op arcade-style brawlers. The game will make all your classic game consoles, including your Sega Genesis, Sega CD, Super Nintendo and even your NEO-GEO blush like a kid on a first date.

Having recently revitalized the top-down 2-D arcade hack-n-slash genre with 2021’s Battle-Axe and channelled the Sega Genesis version of Smash TV through their cult hit Xenocrisis two years prior, Bitmap Bureau are no strangers to recapturing the lighting in a bottle that made so many 2D arcade titles from the Silver Age of gaming so memorable. While coming up short in a few key areas, the studio’s latest old-school offering is still a master class in kicking ass.

As expected, the rabbit hole of coincidental similarities goes pretty deep. Claire and Duke both bear striking resemblances to Blaze Fielding and Adam Hunter of Streets of Rage and use similar fighting styles. Claire’s sister Juliette replaces Haggar’s daughter Jessica as the damsel in distress, and some enemies even resemble characters from other fighting games, like Andy Bogard from Fatal Fury.

It’s all plagiarism of the good kind, and as an old-school gamer I happily embrace it. After all, Final Vendetta’s visual aesthetic is modelled heavily on the early games of the NEO-GEO, which had more than its fair share of blatant Final Fight clones (and later, countless Street Fighter 2-wannabees). So even when Final Vendetta is ripping off one or several of the Silver Age classics that inspired it, it’s all technically an homage, both to the classics and their imitators alike.

Thankfully, Bitmap Bureau knows how to steal from the best, whether it be the visuals or gameplay. Best resembling a pixel-perfect cross between Final Fight, and Streets of Rage 2 with generous dashes of NEO GEO-style sprinkled in, Final Vendetta features large, gorgeously animated character sprites, true-to-the-era hand-drawn pixel-art backgrounds, and timeless old-school flourishes that are bound to melt arcade gamers’ nostalgic hearts.

These include enemies strolling out of the background and into the active play area via “Sega Super Scaler/SNES Mode 7” effects, or lo-fi winks to Genesis fans, such as swaying nightclub spotlights whose coloured light shafts are purposely rendered with dithered pixelation (instead of Super Nintendo-style transparencies).

Game mechanics borrow copiously from Streets of Rage 2 as well. Right down to each character possessing the ability to flip behind enemies from a front grab in order to slam them into the ground or execute a powerful but dangerous desperation move that can knock down surrounding enemies on all sides but drains a chunk of one’s health bar when it connects with an enemy.

There are couple of original elements to the formula as well, such as a useful but hardly invincible block, and a rather dodgy vertical sidestep dodge. But most moves are either cribbed from either Sega’s seminal brawler franchise or adapted from other games in the genre, including the always entertaining and highly essential “kick-‘em-while-they’re-down” ground-n’-pound, which was first popularized in Technos Japan’s Renegade and later “refined” in Konami’s Crime Fighters.

Similar to Streets of Rage 2, Final Vendetta doesn’t formally feature combos per se, but there is enough hitbox flexibility built into the game on purpose. Once players have mastered all their chosen character’s moves and start experimenting, they can uncover ways to string said moves together to annihilate up to several enemies at once.

With practice, they can even air-juggle enemies that they or their optional co-op ally have launched off their feet with a well-timed special. This allows them to deal extensive bonus damage. The shaking of the screen and vibration of the controller when certain devastating hits connect lends a satisfying feel to the combat, even when you’re on the receiving end of an enemy attack.

“What’s not satisfying, however, is how cheap and stingy Final Vendetta will likely come across to most newcomers, at least initially.”

What’s not satisfying, however, is how cheap and stingy Final Vendetta will likely come across to most newcomers, at least initially. At the outset, only Arcade Mode on Easy and Hard difficulties is unlocked, and Easy is practically the equivalent of Hard mode in Streets of Rage 2. Solo players only get 5 lives on Easy or 7 Lives on Hard to play through the entire game, while in co-op both players only get 3 lives each. There are no checkpoints or continues, and extra lives are scarce in the field.

Rank and file enemies and especially bosses will devour large chunks of players’ life bars by swarming the player and getting in cheap and often invincible hits or grabs. Players will need to find themselves a couch co-op buddy and/or develop a set of quick and dependable combos that can be repeatedly spammed against their foes if they are to have any hope of rolling credits on this game. Of course, you can always use a cheat code, but you won’t be able to unlock the Training, Survival, Boss Rush or Extreme Difficulty Modes that way.

On the bright side though, beyond the game’s already solid look and feel Final Vendetta does just about everything else that a great 90s beat-‘em-up needs to deliver. It’s got a banger, tone-perfect techno/house/drum n’ bass soundtrack composed by recording artists Featurecast and Utah Saints (yes, that Utah Saints). It has a memorable collection of cool, challenging bosses. And most importantly, the holy trinity of Subway, Elevator and Nightclub set-piece levels (a staple in any decent example of the genre) is fully represented.

It’s unfortunate that Final Vendetta, which I have no doubt would have been a very attractive proposition at just about any other time of year for beat-‘em-up fans, wound up launching in the exact same week and price bracket as Teenage Mutant Ninja Turtles: Shredder’s Revenge, a far more accessible game with both online and offline play for up to six players.

It doesn’t help that the latter game launched on Xbox Game Pass and that Final Vendetta’s physical version is double that of digital, factors resulting in Bitmap Bureau’s impressive effort being largely overshadowed at release. But if you still have room in your heart for another classic street brawler, then you definitely still owe it to yourself to give Final Vendetta a go.

Final Vendetta is a love letter to the late 80’s and early 90’s era of arcade and home console brawlers that fans of Final Fight, Streets of Rage 2 and SNK’s Neo-Geo console, will immediately appreciate, though the high level of difficulty, lack of continues and no online play might make it a hard sell to newcomers.
REVIEW SCORE
8
Buy On Amazon
File Under: Final Vendetta, Numskull Games