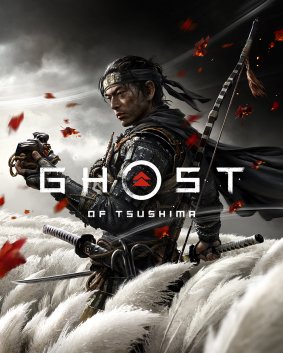 I remember stumbling across the films of Akira Kurosawa when I had finally overcome my fears of foreign films of the non-animated variety. Honestly, it was only a matter of time before movies like The Seven Samurai and Yojimbo came into my life. Later on I would fall for more serialized samurai films, stuff like Zatoichi and Lone Wolf and Cub, but that first foray into black and white samurai fiction really did a number on me for a while, but I will always have a fondness for those movies and the thousands upon thousands of things they inspired. So, when I say that Ghost of Tsushima is a video game that could be a classic samurai film, know that I mean that in the best ways possible.

If you ever played the early 2000’s cult favourite Way of the Samurai on the Playstation 2, you will be pleased to know that Ghost of Tsushima finally delivers on the promise of what that game could be. This is an open-world samurai action game with stealth bits, fun combat, and an engrossing storyline set in historic Japan. While Ghost of Tsushima is occasionally clunky, it is by no means the broken mess that Way of the Samurai was (Despite my fervent love for it). Ghost is typically a luscious and well-polished game at its core that takes its presentation seriously whenever it can. When you start it up you’ll need to configure HDR settings on your PS4, select spoken language, and whether the game should be presented in colour or as if it were a black and white film, something the game calls Kurosawa mode.

I started my playthrough in Kurosawa mode, and it is exactly what it says on the tin. It’s rendered in black and white with a grainy film filter overlaid on top of everything that compliments the intense acting and action, but eventually I decided I was missing out on how lovely everything could be in full colour and amended my settings accordingly. The whole thing is a fantastically immersive experience; you even track objectives by following the wind with no compass or minimap to speak of. It’s a great solution to something that has been done in far less elegant ways in a million other titles that keeps you in the game world as much as possible.

The story seems fairly simple at first blush; the island of Tsushima is beset by the Mongol hordes and, following a disastrous battle, Jin Sakai must liberate his people from oppression while walking the line between honoring his Samurai code and doing what needs to be done. Said code usually boils down to not stabbing folks in the back, but rather engaging them in combat proper. Along his way, Jin will work with staples of the genre, a dishonored former teacher trying to set things right, the last matriarch of a decimated clan out for revenge, and a ronin from his past who has fallen on hard times. The story takes some interesting twists and turns, but I found that the distinction between honoring one’s code and striking from the shadows mostly boils down to how many passive aggressive cutscenes you are treated to, though I appreciated the concept as a riff on the standard morality systems that have become so common in games.

The combat is fun, and I can’t stress that enough. It’s the old story of a light attack and a heavy attack with some fairly simple combos that unlock as Jin levels up. Additionally, alternate styles unlock, each with its own talent tree, that are better suited for dealing with different enemy types. Know how to deal with the glut of baddies efficiently is tantamount as a few good hits can bring the heroic samurai lord to an early demise fairly quickly. Dodging and parrying are also a focus, but the timing is forgiving, so (With the exception of a few tools and abilities) you won’t confuse it for the similarly themed Sekiro: Shadows Die Twice. Even when I was sure I was ready to turn the game off and pursue other interests, the allure of chopping up just one more band of despicable invaders was always there, goading me into another late night of fierce samurai action.

It would be terrible if I didn’t mention that the music in Ghost of Tsushima is absolutely gorgeous. Exciting war drums pair with the great battles and quiet flutes and shamisen elevate the calmer, quieter moments. With so many different things to do, bathing in hot springs, pursuing rumors about legendary warriors, or even writing haikus, the game maintains its high quality presentation throughout.

There are a few rough patches, however. It is never clear what sort of drop will allow you to land comfortably or what will just kill you outright. In fact, climbing, jumping, or otherwise navigating difficult terrain can be a clunky affair. One of my favorite features were the stand-offs, where Jin approaches a group of enemies and takes one on one on one before the fight really gets going, but it was never clear what conditions were necessary to bring up the button prompt for it.

That being said, I adore Ghost of Tsushima in some pretty major ways. It certainly isn’t a perfect game, but it is fairly close. I can see myself sinking an egregious amount of time perfecting my fighting skills or just hunting down all the rad cosmetic gear strewn about the world.

Ghost of Tsushima is an excellent homage to classic samurai films and a darn good game to boot. It is truly a master class in presentation and has fun, engaging gameplay throughout.
REVIEW SCORE
9.5
File Under: Sony, Sucker Punch