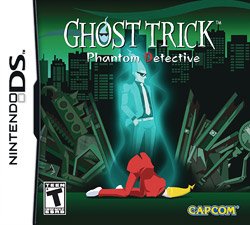 Most stories start at the beginning, Ghost Trick: Phantom Detective starts at the protagonist’s end. Players join the story in media res, right after their hero has died taking control of their once-living character’s ghost. Things get interesting as players are tasked with not only solving the mystery of their own death, but stopping the murders of a few very important people.

The only problem is that being dead greatly hinders your ability to interact with the world around you. As a poltergeist players can inhabit inanimate objects and activate them for some minor mobility, but that doesn’t help much when someone’s got a gun pointed at a helpless damsel.

So, the object of the game becomes figuring out how to solve the problem through your limited range of expression. The game doubles in challenge as you can only pass between objects of relatively close proximity. This means that the puzzle is as much about figuring out how to stop the murder as it is about maneuvering around the setup. Anyone who’s a fan of Rube Goldberg machines will instantly get a thrill out of pinning pieces of the environment together to solve the problems.

Although this may sound like an overly convoluted setup the game doesn’t require any more concentration than your typical point-and-click adventure game. It follows the same style of logic and reasoning, but doesn’t require an inventory to develop Boolean solutions.

There is a unique play on the old idea of a deus ex machine, or god of the machine throughout the game. As players manipulate the physical world around them ever so slightly, they are in essence performing miracles that magically restore order to otherwise chaotic moments. It’s another example of potential authorial intent, but the prospect of turning the player in to the author’s literary crutch is incredibly enticing.

Of course, while the puzzles are the core of the game there is a serious focus on the narrative as well. In traditional Shu Takumi (Phoenix Wright: Ace Attorney) style there’s plenty of exposition to craft a believable world as well as a comprehensive story. Not everything fits as neatly as it does in his previous work, but it’s to be expected considering the subject matter.

Despite its similarities with the Ace Attorney games, Ghost Trick takes a far more stylized approach to its animation, in both character design and actual execution. Sissel, the dead protagonist is a smug but oddly electric personality full of vibrancy and sharp angles despite his deceased status. The rest of the cast is equally colorful, particularly the easy to identify pale purple villains. The overall aesthetic is a departure from reality, but it works well for a universe filled with disembodied spirits.

In contrast the scenes themselves lack the same sort of definition the character portraits rely on. There are no hard borders in the design, and with extremely fluid animation it provides a dream-like state to the action. Pulling the scene’s design away from realism provides with a more clear separation between the real world and the world of the dead. Yet, despite the potential of authorial intent with the design it remains enjoyable to watch in its uniqueness.

The game doesn’t rely on much for audio apart from its poppy synth soundtrack. The music highlights the game’s scenes apex scenes a great deal, but it mostly just sits in the background and doesn’t do much. It would have been nice to see a more robust use of audio cues for the puzzle solving mechanics, but nothing’s broken as it is.

Where the game stumbles at parts is in its reliance on trial and error as a puzzle solving mechanic. Because the game doesn’t really require much dexterity – save for a few timed events – the game rarely presents a challenge with an obvious conclusion. Instead the game offers players the ability to rewind time over and over again to retry a puzzle until they get it right. There’s only one solution to each puzzle, and with infinite retries it’s more a matter of determination than problem solving.

The game also has an unhealthy reliance on dialog, which while not poorly written sometimes feel unnecessarily drawn out to pad an otherwise short game. While story is paramount in a murder mystery like this, some of the speaking segments retread old points and don’t offer much in the form of entertainment or new information.

Most of the characters are fairly likable, from Missile the adorable Pomeranian to the foppish villains like Nearsighted Jeego. They’re relatively one-dimensional caricatures, but they provide a lightheartedness and simplicity to an otherwise grim story of death and murder.

Narratively the game takes some weird steps, especially near the end. While it’s nothing that derails the game to the point of breaking confidence in the world it will make you scratch your head at times. Early in the game it tells you to keep in mind “We’re talking about the powers of the dead, it doesn’t have to make sense”, sound advice lest you over-think an otherwise charming story.

Ghost Trick: Phantom Detective is one of those great Nintendo DS titles that really make the platform shine. Its clever use of the touchscreen controls and the heartiness of its story keep make it more palatable than most portable games. Fans of logic puzzles and good stories will both find satisfaction with this odd, but enchanting title.

While it struggles a little with some core puzzle mechanics it’s something that could definitely be improved with a sequel. With such a charming cast and plenty of room to grow hopefully this isn’t the last we see of the Ghost Trick series. This story was completely satisfying, but there’s no doubt there are plenty more to be told in such a unique universe.