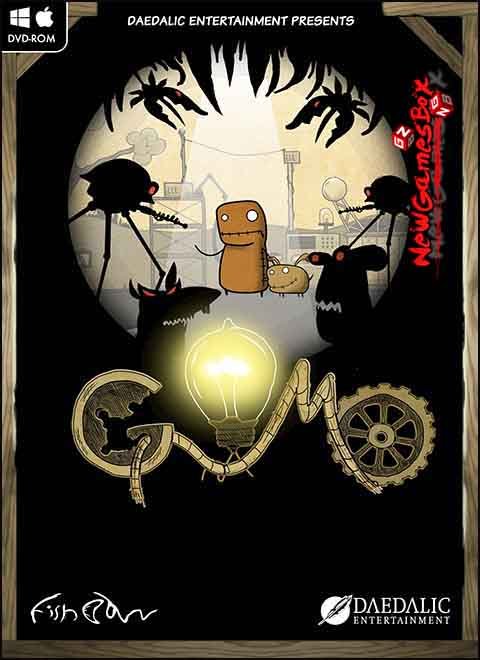 The moment you start Gomo from Fishcow Studios and Daedalic Entertainment, it’s impossible not to be reminded of Machinarium. The game has an art style that immediately evokes the comparison, though Gomo‘s is more akin to a child’s drawings than the smooth lines of its apparent inspiration.

This is not to say that Gomo is lacking its own charm. Far from it – the characters and settings are suitably cute and the simple scenario is told well without any dialogue at all. Gomo himself is reminiscent of Sackboy from LittleBigPlanet, and he stores items by unzipping the back of his sack and sticking them inside. Each scene is full of background animations and sight gags that are entertaining to watch. Furthering the children’s picture book feeling, the story is told with no dialogue at all. Everything is conveyed entirely from context. Said story is rather simple, consisting of the titular character’s journey to rescue his dog from the clutches of an alien, but the simplicity fits with the game’s minimalist tone.

Sadly, this minimalism goes too far. The world of Gomo just feels empty. One of the biggest draws of any good adventure game is the ability to meet and interact with a colorful cast of characters, but there’s none of that to be found here. There are a grand total of perhaps a half-dozen characters in the entirety of the game, and one of those was reserved entirely for a sight gag rather than genuine interaction. Two of the others are present for all of a single puzzle each, and the last is the dog. As such, most of the short length is spent with the protagonist wandering around alone and interacting with a seemingly nigh-abandoned world.

Most importantly, however, there just isn’t a lot of game to it. It is both extremely easy and short. Set to the harder difficulty level—it defaults to Easy—I completed the entire game in under two hours. The puzzles are all quite simple. Your inventory maxes out at all of three items, and rarely did it even reach that point. There is little to no ability to explore—I can think of just one time when I had to leave the screen I was on to go find an item on another. Most puzzles were solved simply by clicking—the pointer changes to indicate things that you can interact with, preventing pixel-hunting but removing what little potential for experimentation may have remained. There are no options for what to do with items. You cannot look at or combine them, but merely use them on one of the aforementioned cursor-changing hot spots.

Despite that, the game still holds your hand to a surprising degree. One particular puzzle tasks you with forcing open a door. This puzzle is solved with two clicks; one to push a rock closer to the door, and another to use a string on the door, where the hero will proceed to tie the door to the rock and push it off the edge of the walkway he stands on. While the straightforward nature of the puzzle is nice, a single click skips through so many steps that I had to double-check that I was in fact playing on Hard. Other puzzles are even worse, solvable entirely by clicking the same object multiple times with no thought or item usage required.

In the end, Gomo is a quick and simple adventure game that would be good for new gamers or families with young children who want to learn the fundamentals of the genre, but there’s little here to keep long-time adventure gamers happy. Stick with Daedalic’s Deponia series or one of Telltale’s recent offerings instead.

Gomo himself is reminiscent of Sackboy from LittleBigPlanet, and he stores items by unzipping the back of his sack and sticking them inside.
REVIEW SCORE
6
File Under: Adventure, Daedalic Entertainment, PC