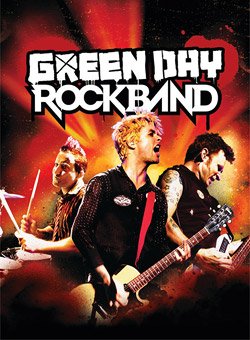 Band specific Music games are a simple affair to Review. It all boils down to personal taste and Green Day: Rock Band is no different; if you like Green Day you’ll get this game, if you don’t, then you’ll pass on it, it all comes down to that. But for fans of the band, and for fans of the Rock Band series, there are certain qualities about this latest game that may intrigue players beyond merely playing some favourite songs from a successful, contemporary band.

Not Quite The Beatles

Like other band specific games, Green Day takes a chronological approach to its gameplay, spanning the career of the band from 1994 to 2009. Players are taken through different venues and remain firmly “at the helm” of band’s trio, starting out at a smaller, grungier venue that represents a pastiche of elements from Green Day’s early, struggling days, and then moving on to the National Bowl in England and the Fox Theatre in Oakland California. Unlike the previous Beatles game, there’s nothing in the way of even a barebones narrative structure and no pre-rendered animated sequences that segue from one locale and time period to next. No story here, it’s all about the Music.

For vocalists, Harmonix has just about nailed the perfect balance in their new vocals code. The original Rock Band was sometimes imprecise in its detection of pitch, but they dramatically overcompensated in The Beatles: Rock Band with pitch detection so sensitive that even the slightest quaver was unacceptable to the code at Expert level The Green Day pitch detection manages to finally hit the sweet spot in the middle ground, being more precise than Rock Band while accepting more variance for individual voices than the Beatles game. The harmonizing feature has also been carried over from the Beatles game with a total of one singer and two “back-up” singers, although the norm for most songs is usually just one additional singer.

Most interesting of all, the Green Day game includes set-list “challenges” in which players must acquire a certain number of stars while playing through a predetermined list and number of song Overdrive now “carries over” in these challenges so that if players have a full bar of Overdrive energy at the end of one song, when the next starts, that bar remains, creating strategic scoring possibilities in which players can now conserve Overdrive if they know the next song has a “points heavy” introduction, compared to the conclusion of the current song.

In the end, Green Day: Rock Band is fitting tribute to the band, if slight on supplementary fan material compared to The Beatles: Rock Band. The game still uses the same established mechanics of the Rock Band series, with a few interesting tweaks, but the final arbiter of the purchase decision is whether you’re a fan of Green Day. The game is competent but unambitiou

The game still uses the same established mechanics of the Rock Band series, with a few interesting tweaks, but the final arbiter of the purchase decision is whether you’re a fan of Green Day.
REVIEW SCORE
8
File Under: Harmonix, Xbox